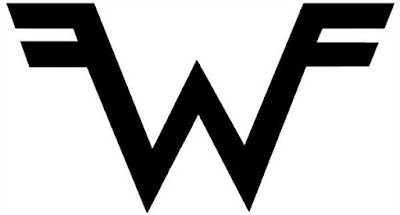 Weezer have released nine new albums in the past twelve years, including four in the last three, which is just insane. They haven't all been great, or even good (Hurley, I'm looking at you), but cherry-picking some of the best tunes from each record creates a picture of a band that's just as fascinating as they were in 1994.
Speaking of that, take a gander at the revised 12 By Weezer, which covers the band's first 14 years.
1. "(If You're Wondering If I Want You To) I Want You To" (from Raditude, 2009)
Like many of Weezer's best songs, this one finds Cuomo casting back to the past using very specific details. It's also in the conversation for the catchiest song they've ever done.
2. "Ruling Me" (from Hurley, 2010)
This one was co-written with Dan Wilson, and the widescreen harmony-laden chorus is exactly what you'd expect when two of the best modern power pop songwriters alive combine their talents.
3. "Go Away" (from Everything Will Be Alright in the End, 2014)
An earworm duet with Bethany Cosentino of Best Coast calls back to Weezer's fuzzy early days in all the best ways.
4. "Everybody Needs Salvation" (fan club exclusive, 2015)
Weezer are one of the few bands who can afford to use really excellent songs as non-album releases. Starting off as an acoustic strummer and shifts into a sludgy rocking chorus. The real appeal is a bridge that builds steadily into A-Ha worthy vocal gymnastics and a too-brief guitar duel.
5. "King of the World" (from The White Album, 2016)
Here Cuomo indulges in a flight of fancy about becoming a monarch, detailing he'd use it all that power to make his girl happy.
6. "Sweet Mary" (from Pacific Daydream, 2017)
The quickest way to my heart is to put a Beach Boys homage in the climax of your song.
7. "High as a Kite" (from The Black Album, 2019)
Weezer have a lot of songs that refer to drugs, and this one might or might not be one of those songs. Either way it's about a yearning to transcend. With its a Bacharachian touches and soaring melody, listening to it almost achieves that goal.
8. "I'm Just Being Honest" (from The Black Album, 2019)
Over a Cars-like arrangement, Cuomo tackles the age old question of whether or not honesty really is the best policy.
9. "All My Favorite Songs" (from OK Human, 2021)
Speaking of honesty, a bouncy string-backing drives this litany of admissions, e.g. "I love parties, but I don't go, then I feel bad when I stay home"; "I like spacing out when people talk," and "I fall in love with everyone who hates me."
10. "Grapes of Wrath" (from OK Human, 2021)
Essentially a commercial for Audible, but us bookworms don't often get songs namechecking works by Virginia Woolf, Joseph Heller, and J.R.R. Tolkien.
11. "I Need Some of That" (from Van Weezer, 2021)
Once again Cuomo looks back on his teen years with affection and specificity. The guitars by turn recall Bryan Adams and hair metal soloing.
12. "The End of the Game" (from Van Weezer, 2021)
Van Halen-style guitar pyrotechnics show up throughout this break-up tune. Though Van Weezer was recorded prior to October 2020, Eddie Van Halen's death adds an extra layer of meaning and pathos.