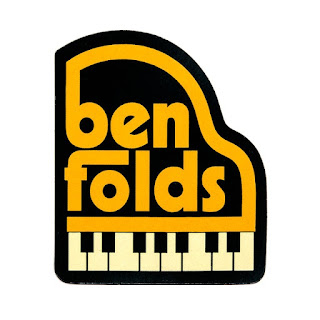 You should check out the original 12 By Ben Folds.
1. "Free Coffee" (from Way to Normal, 2008)
Ben Folds is far from ultra-famous, but he's prominent and successful enough to receive the perks of celebrity. Here he points out the irony of it, "When I was broke / I needed it more / but now that I'm rich / I get free coffee."
2. "You Don't Know Me" (from Way to Normal, 2008)
Ben Folds and Regina Spektor are such a perfect pairing. They need to make a whole album together.
3. "Brainwascht" (from Way to Normal, 2008)
This "diss track" was written in response to the Fleming & John song "Wrong," which was obliquely directed toward Ben in the aftermath of his divorce from his third wife (Fleming & John once opened for Ben Folds Five, and John Mark Painter had worked with Ben for several years). Ben gets some good jabs in about the hypocrisy of it all: "Isn't there something in the Bible about forgiveness and love  / And more importantly about throwing stones and what your house is made of."
4. "Bitch Went Nutz" (from Stems and Seeds, 2009)
For six of the songs on Way to Normal, Ben recorded completely different tunes with similar names as a sort of prank on those who leak albums early online. This is one of those. It's a hilarious story song about a conservative lawyer who brings his liberal girlfriend to the office Christmas party; though Ben takes the perspective of the boyfriend, it's pretty clear where his sympathies really lie
5. "From Above" (from Lonely Avenue, 2010)
I can't speak highly enough of Nick Hornby and Ben Folds's collaboration album Lonely Avenue. I think it helped greatly that the two men's lyrical sensibilities are not too far off (both like to tell stories, take on unexpected perspectives and topics, build characters through sharp details, and utilize wry humor), but working from Hornby's lyrics really seemed to bring out Fold's musical "a-game." This particular song, about soulmates that never meet, does pretty much all of that.
6. "Levi Johnston's Blues" (from Lonely Avenue, 2010)
It's hard to know what someone who didn't live through the 2008 election would make of this catchy number centered on Sarah Palin's almost son-in-law. Hornby smartly takes Levi's perspective to express his confusion and dismay at being suddenly thrown into a national spotlight. The chorus quotes Levi's own blockheaded MySpace page bio.
7. "Claire's Ninth" (from Lonely Avenue, 2010)
Heartbreaker about a girl trying to navigate the aftermath of her parents divorce on her birthday. The song actually switches back and forth between perspectives, with the chorus taking on the parents' voices.
8. Ben Folds Five: "Tell Me What I Did" (from The Best Imitation of Myself: A Retrospective, 2011)
Ben Folds Five reunited in the early 2010s, and one of the songs they polished up was Robert Sledge's tune about an kid battling his way though school. The tune had been around awhile, with the band playing it a few times on their final tour before breaking up in 2000.
9. Ben Folds Five: "Hold That Thought" (from The Sound of the Life in the Mind, 2012)
A thoughtful ballad with those trademark BF5 harmonies. The lyrics are more impressionistic than Folds typically writes, with three seemingly disconnected little vignettes that read like parables.
10. Ben Folds Five: "Draw a Crowd" (from The Sound of the Life in the Mind, 2012)
There are times when the juvenile aspect of Folds's sense of humor is too much for me. And then there are times when it strikes just the right note, as it does on this wide-ranging tune about chasing fame, doing the best with what we have, and feeling disconnected from our own past.
11. "Capable of Anything" (from So There, 2015)
I love the way that this song comes at the title phrase from several different angles. There's the inspirational meaning, as in "you can do anything you put your mind to." There's the use of it as not taking any responsibility for your actions, i.e. "You don't seem to think you are capable of anything." And there's the nefarious interpretation of "Watch out, he's capable of anything!"
12. "2020" (digital single release, 2020)
The trauma of 2020 is still fresh, but it does help to laugh. And as time goes on I hope I'll appreciate this song more and more in a "can you believe we made it through that" sort of way?