Since You're Gone: A Ric Ocasek Appreciation

Ric Ocasek passed away yesterday, and my heart sank when I saw the news. Don't know what you got 'til its gone and all that, but it's difficult to anticipate whose passing is going to affect you and how, and thinking about it too much is ghoulish anyway. The bottom line is that Ric Ocasek has had an outsize impact on the development of my music fandom, and I hadn't truly reflected on that fact until today.

Like my fellow Gen-Xers, I grew up hearing Cars songs as part of the tapestry of everyday life. "Magic" at the waterpark, "Moving in Stereo" in Fast Times at Ridgemont High, "Drive" on a car ride at night (how perfect!), "You Might Think" and "Just What I Needed" at the mall or mini-golf course. I knew all the songs but couldn't name the band. 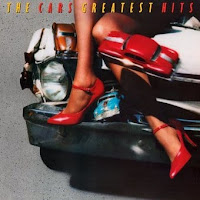 Freshman year of college I conducted an intensive self-education in pop music that started with greatest hits albums by "important" bands. During a rare trip to the mall (I didn't have a car those first couple of years of college) a friend advised me to get the 1985 Cars Greatest Hits album on CD. "You can't go wrong there," he said. He was right. I clearly remember sitting in my dorm room the following Saturday night and putting on the album before meeting up with everyone. I knew every single song, or at least it felt like I did. In a lot of ways that album set an impossible standard for my future greatest hits purchases; rarely do I recall buying another compilation that felt so instantly familiar.*

*(Despite my nostalgic love for that 1985 Greatest Hits compilation, it's woefully inadequate. In fact, nearly all of their compilations fall short of perfection. Just What I Needed is too much to digest. Moving in Stereo (2016) is missing some major tunes (no "Magic"?!?!). That leaves the 2002 Complete Greatest Hits as the best of the bunch.)

This was circa 1995-1996, so by this time I was already a diehard Weezer fan; little did I know that the producer of that Weezer record I loved so much was the same dark-haired, sunglasses-sporting man who yelped over all those catchy Cars songs. Not long after I bought The Aeroplane Flies High, a singles set by Smashing Pumpkins (at the time one of my Very Favorite Bands), and it included a cover of "You're All I've Got Tonight" and in the liner notes Billy talked about his love of the Cars. That song wasn't on Greatest Hits, and this was one of the first indications that maybe the Cars were a band that required investigation beyond the hits (not many bands made it to that level for me in those simple times). So I bought the first record, and Heartbeat City, and reveled in those. Then I bought a more ambitious greatest hits set: Just What I Needed: A Cars Anthology. 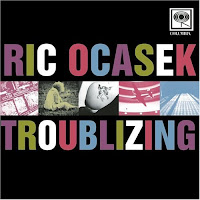 In 1997 Ric Ocasek released the solo album Troublizing. It featured a host of cool collaborators, including Billy Corgan, Melissa Auf der Maur (of Hole), Brian Baker (from Bad Religion), Ira Elliot (of Nada Surf), and former Car Greg Hawkes. By this time I'd started working at the campus radio station and I eagerly grabbed the promo copy Columbia had sent us. I listened to that record quite a bit that year, and songs like "Hang on Tight" and the title track still show up on my mental jukebox from time to time.

Post college when I started seriously collecting vinyl, one of my first Cheapo goals was to get all of the Cars albums on LP, followed shortly the non-Ocasek solo albums (Hawkes, guitarist Elliot Easton, and bassist Benjamin Orr all put out records in the '80s).

When Ocasek worked with Weezer again (on 2001's green album), my awareness of and appreciation for him as a producer came to the fore. I loved the songs he did with No Doubt on Rock Steady, and the sugary rush of his contributions to Motion City Soundtrack's Even If It Kills Me, and Nada Surf's High/Low. It made me realize just how much the Ocasek/Cars sound was the sound I was often looking for in my music, uptempo, buzzy, layered, melodic. As an aside, I learned today that one of my favorite bands - Sloan - almost tapped Ocasek to produce their second record, Twice Removed; the missed possibilities of that collaboration boggles the mind. Now looking over the list I realize I haven't listened to even a third of his production discography, so I'm looking forward to exploring that.

When Move Like This came out in 2011, one of the 11 cities the reunited Cars played was Minneapolis, at First Avenue. I didn't hear about it until after the fact, when it had long since been sold out. That'll forever be one of my great missed shows, especially now.