While it wasn't quite as long as the wait for Chinese Democracy, REO Speedwagon fans endured an egregious 11 years between Building the Bridge and a new album. All they had to tide them over were two songs on the 1999 Epic compilation The Ballads: "Just For You" (written by Kevin Cronin with Jim Peterik from Survivor) and "Til the River Runs Dry" (by Cronin and singer-songwriter Jimmy Scott). 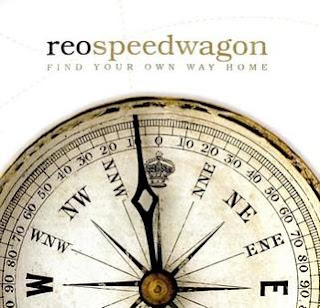 It seems the band had considered themselves retired from recording after the tepid reception to Building a Bridge, but according to Cronin, a 2000 tour with Styx - specifically seeing a new generation of fans singing along with the old songs - lit a fire under the band to start working up new material again.

The result was Find Your Own Way Home, which came out in April 2007. The band self-released the record, and cut a deal with XM Satellite Radio to put it out as part of a special three-CD set at Wal-Mart and Sam's Club (the other two discs were a DVD of unplugged performance/interview and a CD with a live version of Hi Infidelity).

Joe Vannelli (longtime keyboardist for his brother, "I Just Wanna Stop" and "Living Inside Myself" hitmaker Gino Vannelli), who co-produced the album, plays in Doughty's stead. Personally, I have a hard time accepting this. I realize that bands bring in other players to the studio, and that studio recordings are a different beast from live performances, but to replace the only player who'd been in the band since its inception doesn't seem justifiable. Perhaps Doughty was going through something that prevented him from participating fully, but if you've already waited 11 years between records, why not wait a bit longer until you're at full strength?

Setting aside that very large caveat, lets dive into the album itself. In short, it's pretty clearly the best of this line-up's three records. It expertly walks the line between the shiny, highly produced The Earth, a Small Man, His Dog, and a Chicken and the stripped-down Building the Bridge.

It's also the first REO album since Hi Infidelity to feel like a concept album. In an interview with Julio Diaz of the Pensacola News Journal Cronin spoke about how the band was meticulous in making sure every song fit together. He also said that part of the delay was a happy home life. "I normally do my best songwriting when my personal life is in the most chaotic state" he told Diaz.

Perhaps that's why this album's songs dig emotionally deeper than REO songs of the past. There's still a lot about love and romance, but a big theme on Find Your Own Way Home can be found right there in the title. Over and over again in the album's songs, the narrators are in that "chaotic state," and concluding in many cases that self-reflection, self-belief, and self-love are what's going to get them through it. In this way the tunes almost seem like both a form of therapy (or maybe the result of it).

The album opens with "Smilin' in the End" a song that belongs in two categories of REO songs. In one way it's a statement of defiance toward the bullies that continue to occupy some of Cronin's headspace ( see also, "Can't Stop Rockin'" and "Tough Guys"). But it's also on the long list of REO don't-give-up anthems.
In fact, the whole album is really about perseverance, but less "roll with the changes," "keep pushin' on," and "ridin' the storm out" and more take-a-look-in-the-mirror-and-figure-your-shit-out. 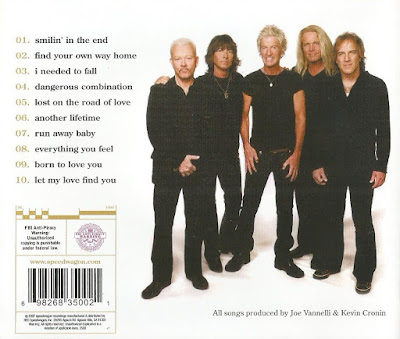 The album's title track is sort of an inverse of the sentiment on "Can't Fight This Feeling." Instead of the narrator declaring he'll "come crawling across the floor / come crashing through your door" he's asking "are you gonna go the distance / step into the cold hard rain?" He wants her to fight for the feeling.

The other big ballad is "I Needed to Fall." Cronin has said it was the final song to fall into place for the record, and that it was part of a trilogy with "Keep On Loving You" and "Can't Fight This Feeling." Seems like hyperbole to compare a new song to two beloved #1 hits, but damned if he isn't close to right. The song uses an embarrassingly rich melody and stacked harmonies to tell another tale of feeling overwhelmed and lost. The verses are bleak, but the chorus repeatedly acknowledges the value of being laid low and having to rebuild, as well as the power of love to help that happen.

The rest of the album sporadically continues this theme of losing and finding your way. It's there overtly in "Lost on the Road of Love" and closer "Let My Love Find You." Dangerous Combination" and "Run Away Baby" both allude to trouble and strife. But it's the expansive "Everything You Feel" that brings it all home. One of the first songs written for the record - the band had played it in concerts as early as 2002 - the song is an advertisement for self-exploration and self-acceptance, encouraging the listener to both embrace and seek out the roots of their feelings. "You are everything you feel," Cronin tells us on the chorus.

Musically "Everything You Feel" is vibey, sounding a lot like the band circa Life As We Know It, with its synth, organ, shared vocals, and electric guitar solo. That makes it a musical outlier on an album that's the most country-and-blues leaning of REO's career. REO always had a slight country tinge, but it's fairly prominent here on "Dangerous Combination," "Lost on the Road of Love," "Another Lifetime," and "Let My Love Find You."

Finally, we have to talk about Bruce Hall's requisite contribution. It's called "Born to Love You" and it sounds a bit like the Blues Brothers jamming with Ray Charles, even down to the Raelettes (in this case, uncredited female background singers). Cronin takes over on the Beatlesesque bridge (John and Paul would have called it a "middle eight") which sounds like it could almost be another song completely. Overall, like most of Hall's songs, the tune provides a nice change of pace on the album.

Find Your Own Way Home was met with positive reviews all around, and though it didn't chart, it did produce the band's first radio hits since 1990, with "I Needed to Fall" getting to #25 on the Billboard adult contemporary chart, and "Find Your Own Way Home" rising to #23.

However, the band continues to tour regularly, and in recent years has debuted a new song called "Whipping Boy," but it's looking increasingly likely that Find Your Own Way Home will be the band's swan song. If that turns out to be the case, it's certainly a fine and fitting final statement.