July 05, 2019
Where we left off:
R.E.O. Speedwagon reunited with their second (of three) lead singers, Kevin Cronin, and released R.E.O.. The album didn't produce any hits, nor did it sell well.

I feel it must be mentioned again how incredibly patient Epic Records was with REO Speedwagon. By 1977 the band had been with the label for 6 years, but had yet to produce anything even approaching a sales success, and yet the label stuck by them. The band, having noticed the disparity between their sales and the ecstatic reception they got at shows (sometimes as headliners, more often at this point still as an opener for artists such as Joe Cocker, J. Geils Band, Rainbow, Heart, and Bachman-Turner Overdrive), proposed a live album. This, they argued, would show fans who hadn't seen them in concert what REO Speedwagon was really capable of.

The massive success of KISS's Alive! and Peter Frampton's Frampton Comes Alive made their case for them. And thus Epic issued the double album Live - You Get What You Play For in January 1977. 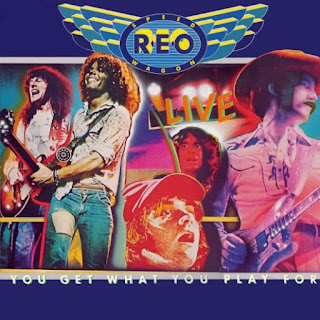 Recordings were taken from shows in Kansas City, Indianapolis, Saint Louis, and Atlanta.  Not surprisingly the tracklist relied heavily on songs from the two records with Cronin up to that point, R.E.O./T.W.O. and R.E.O.. On four songs - two from the band's 1971 debut and two from Ridin' the Storm Out - we get to hear Cronin's take on songs originally sung by Terry Luttrell and Mike Murphy.

Well, actually, you might remember that in the case of Ridin' the Storm Out, the band had nearly completed that album with Cronin before his departure. So in a weird way we're hearing "Son of a Poor Man" and "Ridin' the Storm Out" as they were originally intended. The set is rounded out by a six minute guitar solo from Gary Richrath (as if "Flying Turkey Trot" right before it hadn't been enough). Around the third minute it's hard not to think about the fact - since this was 1977 - that this exactly they type of excess that punk came to kill.

Snark aside, the band's strategy worked. You Get What You Play For was REO's first genuine success. It reached #74 on the Billboard Hot 100, equaling This Time We Mean It. But it also produced the band's second charting single. In a bit of sweet justice for Kevin Cronin, it was his version of "Ridin' the Storm Out" that did the honors. 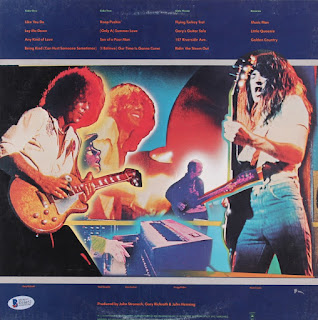 This would prove to be the final REO record featuring Gregg Philbin on bass. Before the tour to promote You Get What You Play For, Gregg left the band. Keyboardist Neal Doughty offers a couple of different reasons for Philbin's departure in the liner notes to the band's 2018 The Early Years 1971-1977 box set, saying that it was a mixture of Philbin not being a great musical fit for the band's new sound, and at the same time growing frustrated with the band's lack of success. Alan Gratzer says substance abuse issues were also factor, making it sound like Philbin didn't leave entirely voluntarily.

Philbin himself acknowledges the substance abuse, but also cites the fact that money wasn't great in those pre-success days (Cronin and Richrath, as songwriters, were getting the lion's share of the band's money) and the band were fighting among themselves. He said in a 2012 interview, "I'd done it for 10 years and I was going, 'It's kind of over anyway.'" Of course he was wrong about that, and he admits in retrospect that it was a mistake to leave.

So, even though REO finally had stability in the lead singer spot, they'd now need a new bassist.

Burning Question:
What happened to Gregg Philbin?
After leaving REO, Philbin moved to Chicago for awhile, and then settled in the Pensacola, Florida area where he used royalties to invest in real estate. Over the years he's played with several local bands, including the Instant Daddios, the Stevie G. Band, The Stuff, and Belle & Company.