July 26, 2019
Where We Left Off:
REO stumbled sales-wise with their hard-rock turn, Nine Lives, threatening the commercial momentum they'd been building. Though losing patience, Epic issued an REO compilation, A Decade of Rock 'n' Roll 1970 - 1980, featuring a couple of tracks from each album. It was a prescient move, as interest in the band would soon skyrocket. 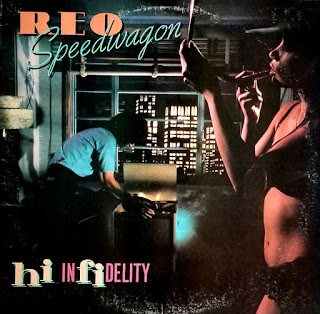 You knew it was coming. Hi Infidelity, released in November 1980, is the album that made REO Speedwagon household names. After 10 years of languishing in the lower recesses of the rock hierarchy, the band finally broke through. Hi Infidelity would spend fifteen weeks at the top of the Billboard charts, making it the best-selling album of 1981. It spawned four top-25 singles and has sold over 10 million copies to date.

The album's astonishing success is at least partly attributable to a very aggressive radio marketing campaign from Epic (the result, according to Frederic Dannen's 1990 book Hit Men, of the band gifting $8000 Rolexs to Epic execs). But all the marketing push wouldn't have mattered if the record wasn't good, or didn't connect with its audience. But it was, and it did.

The record is a loose concept album built around the title phrase. In nearly every song long-term romantic relationships are at a breaking point, as evidenced by the two major hits, "Keep On Loving You" and "Take It On the Run." The former, a very-REO statement of perseverance in the face of turmoil, became the band's first number one hit. The acoustic-based "Take It On the Run," written by Richrath, was a kiss-off to a cheating partner (even though, ambiguously, he doesn't believe it, not for a minute). It got to #5 on the charts.

In propulsive opener "Don't Let Him Go" lead singer Kevin Cronin begs a woman to be understanding of her immature guy. It's a bit creepy until you learn that Cronin wrote the song as a plea to the bands' various girlfriends and wives to stick by them despite their crazy touring lifestyle. It was perhaps for naught, as the doo-wop-styled "In Your Letter" is based on a real experience, in which keyboardist Neal Doughty returned home to find a Dear John letter from his wife.

Elsewhere Cronin bemoans lost love (on the pop rocker "Out of Season") and pines after a potential love (on gospel-tinged closer "Wish You Were There"). As the AllMusic Guide's Steven Thomas Erlewine put it, "This is really arena rock's Blood on the Tracks, albeit by a group of guys instead of a singular vision, but that makes it more affecting." 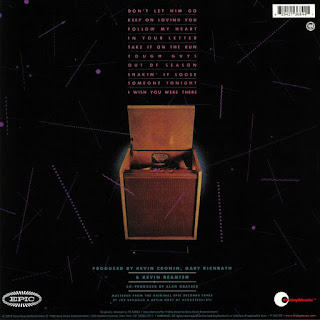 Only on (REO bassist) Bruce Hall's power-poppy "Someone Tonight" is the guy doing the heartbreaking: "If I could convince you / if you would just say all right. / I'd treat you so tender, / then leave you and never write." Or maybe the woman is also on board with a consensual one night stand, so it all works out for everyone?

This album is the first where the band brought in an outside songwriter to collaborate, though Tom Kelly wasn't quite an outsider. He'd sung backup on You Can Tune a Piano... and Nine Lives, and got his start in the same central Illinois music scene as the rest of the REO guys. Here, he co-wrote "Out of Season" with Cronin and "Follow My Heart" with Richrath. He also serves as part of the "He-Man Broken Hearts Club Choir" on "Keep On Loving You" and the doo-wopish "In Your Letter" along with a multi-tracked Cronin and Richard Page, a veteran of yacht rock band Pages and who in a couple of years would go on to form Mr. Mister and score the hits "Broken Wings" and "Kyrie." Kelly would play an increasingly large part in REO in the next few years, and would have his own massive success, but more on that in a later review.

As you may have guessed from the Earlewine mention above, Hi Infidelity also happens to be REO's Rock Solid. This is a long-running 3 Minutes, 49 Seconds feature, in which I use combined ratings from the All Music Guide and Amazon.com to find out which album by an artist is most beloved by critic and fans.

Earlewine's review opens with an insult, stating that Hi Infidelity has been "widely forgotten and spurned." Even so, he says that on the album REO "captured everything that was good about arena rock...filled with hooks as expansive as Three Rivers Stadium and as catchy as the flu."

The fans on Amazon were similarly praiseful, with a startlingly consistent commonality, typified here by "Carol," who wrote, "Awesome stroll down memory lane to listen to this CD." I lost count of how many reviews reveled in the nostalgia they felt in revisiting Hi Infidelity. This includes a write-up by "icefire2" that also happens to represent my favorite kind of Amazon review, the Personal Recollection Review:


"I have enjoyed listening to this with my sisters. We had a Birthday party with our entire family and we played the gong show and each of us had to pick a song from the album. What a fantastic night we all had so much fun singing at [sic] loud plus dancing like we didn't care who watched us."

"Ernesto Manzo" was one of the few to approach it from a more current perspective. "If I had to pick one album that truly typified it [sic] era, this would be it. Great energy, songs just stick in your mind for days."

REO Speedwagon have never been considered cool, a fact that Erlewine, as a professional music crtic, was duty-bound to bring up, but Amazon reviewer "Greenhouse Effect" also tackles the topic, albeit in a more forceful way. They wrote, "THEY HAVE A LOT OF NERVE TO SUCK THIS HARD AND YET STILL BE AMONG THE GREATEST...".

Here's where I'd usually weigh in and share my feelings on the choice, as well as offer my own personal favorite, but I'll save that for the final summary after I'm done writing about all of REO's albums.