July 19, 2019
Where We Left Off:
With Kevin Cronin back on lead vocals and Bruce Hall replacing Gregg Philbin on bass, REO Speedwagon were finally building sales momentum with two successful albums in a row.

Nine Lives was released in July of 1979. The title was likely a reference to the fact that it was the band's ninth album (if you include You Get What You Play For), as well as the fact that they'd survived a level of turmoil that would have been the end of a band with less fortitude. There are also nine songs on the album.

Perhaps the most interesting and puzzling thing about this record - both in sound and in presentation - is how much it represented a swerve away from You Can Tune a Piano.... You'd think that having finally hit on a successful formula REO would want to repeat it. But on the whole the music on Nine Lives abandons the countryish pop rock of the previous record in favor of a faster, harder sound, way more "Ridin' the Storm Out" than "Time For Me to Fly." Gary Richrath and Kevin Cronin, REO's primary songwriters, made this shift consciously and purposefully. Once again they produced the album themselves, teaming with producer/engineer Kevin Beamish, who to that point was best known for engineering The Miracles' 1975 #1 hit "Love Machine." 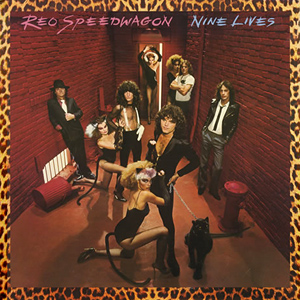 To match the harder sound, the label suggested REO change their look. So out went the late-1970s casual wear and in came the leather gangster look you see on the album cover that made them appear to be an L.A. glam band. Cronin's chestless-sheer sleeve "shirt" paired with suspenders is particularly egregious, making him look like a magician stripper. Upping the ridiculousness are the scantily-dressed cat women and a real life panther that reportedly tried to take a chunk out of Richrath.

The band went along, hoping the new image might drive record sales. It didn't. The album sold only a fourth as much as the previous one, and there were no charting singles.

None of that is to say that its a bad record, though. In fact, the lack of hits makes it one of the most intriguing entries in REO's catalog.

Part of the intrigue is the way the album's songs presage the commercial rise of hard rock in the 1980s, especially L.A. bands like Motley Crue and Guns N' Roses that in 1979 had not even formed yet. The first two songs, "Heavy on Your Love" and "Drop It (An Old Disguise)," have the fast tempos, melodic guitar solos, wailing leads, and shouted group vocals that would become a hallmark of the genre. (Though to be fair, a lot of that came from KISS).

Gary Richrath clearly felt at home in this arena, and his songs on this set are strong. "Easy Money" is a flamenco-flavored story song about a drug run gone wrong. The narrator gets caught and sent to prison. He laments, "I was thrown in cell with a killer / A convict who coughed through the night / While I laid awake with the chills and shakes / Hoping for a file in a cake." "Only the Strong Survive" is another of the band's patented odes to perseverance, and fittingly would see a second life as the title track of Richrath's 1992 solo album. And "Meet Me on the Mountain" is a sweet remembrance of a doomed affair. 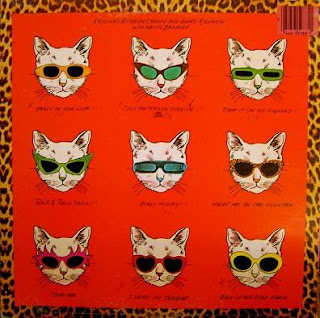 Cronin, somewhat surprisingly, also thrives in the hard rock setting. Besides writing the aforementioned "Drop It (An Old Disguise)," his song "Take Me" is convincingly tough. Even the stacked harmonies (provided by Cronin, Tom Kelly, and Bill Champlin, who was a couple years away from joining Chicago and singing lead on some of their biggest hits, including "Hard Habit to Break," and "Look Away") at the end are more spooky than poppy. Only the countryish "I Need You Tonight" ventures into bubblegum territory, with Cronin affecting a high, childlike tone on the verses.

While these seven songs are uniformly good, it's clear the quick turnaround from the last album had left the band a bit short on material. So there's a cover of Chuck Berry's "Rock 'n' Roll Music," and while it provides a nice continuity with their earlier cover of Berry's "Little Queenie," the song feels out of place. On the flip side of that, the shortage likely allowed bassist Bruce Hall to sneak in a song, and it would turn out to be Nine Lives' standout track. Hall claims to have written "Back on the Road Again" when he was 17 years old and playing in a band called Purple Haze. He dusted it off for REO, taking lead vocals himself. It's a rockin' farewell that the band still plays live in concert to this day. From here on out, Hall would get at least one song per album.

Despite its relative sales failure, Nine Lives was a vital creative step in the band's commercial ascent. For the next album. they'd take a bit more time, and apply what worked from this record and You Can Tune a Piano... to create something that would reach a level of success they could scarcely dream of.