* * *
If anyone is qualified to tell you about "Weird Al" Yankovic's Rock Solid, I am. I've spent the last 5 months listening to and writing about every note Al has recorded. 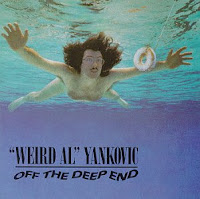 And yet, I'm completely baffled by the fan and critic choice. There's no way I would have picked 1992's Off the Deep End as Al's best album. When I reviewed it, I gave it a C+, which puts it no better than 7th place in his catalog. And yet, that's the clear winner. It got a 4.5 star rating from the All Music Guide, and the same from Amazon.com reviewers. Its closest competition was 1984's In 3-D, which clocked the same AMG rating, but a half star less from Amazon reviewers (and a much smaller percentage of 5 star ratings as well). Even Worse, from 1988, came in a distant third.

But I want to trust my Rock Solid-determining methods, so, with a slightly open (ajar?) mind, I'll let the critics and fans try to convince me that Off the Deep End is Al masterpiece.

Barry Weber's amateurish All Music Guide review doesn't do the trick. In fact, it nearly cements me in the opposing view. He finds Smells Like Nirvana, a song about not understanding Kurt Cobain's lyrics, to be the height of "cleverness." No, it's not. He also calls Trigger Happy, When I Was Your Age, and You Don't Love Me Anymore Al's "best originals ever." Well, I'll give you the last one, and reluctantly support the first one, but When I Was Your Age? No, uh-uh. It's a rip-off of Don Henley and grandpas everywhere. Weber also labels Taco Grande a "satire." Satire is a form of ridicule, and I fail to see what a list of Mexican food (for that's all that Taco Grande really is) is ridiculing.

It's never a good thing when you're relying on Amazon.com reviewers for logical and well-articulated criticism, but let's see what they have to say about Off the Deep End. Well, no less than three of them (Lawrance Bernabo, Cooper Cornelius, and Memoria) declared it Al's best work. Scott Basler said, "This is my favorite CD EVER of ALL TIME!" James Simpson titled his review, "greatest album ever made in the history of music" and concludes his review with, "Unless you are deaf you will want this album." So, um, yeah.

Matthew Paul Fryman declares the album to be "Pure genious [sic]" and Matt Sz claims that "Weird Al's brand of magic has transformed a previously un-musicked person into an avid listener." Another Matthew brazenly plagiarizes the All Music Guide review, word for word! It probably says something about Barry Weber's work that it doesn't seem completely out of place there. Finally, brad78 writes that, "Off the Deep End is a monolithic, paradigm shifting work of undeniable genius that, because of its unparalled crafstmanship, and razor sharp humor, will and must stand alone in the pantheon of pop music." It's never a good thing when a glowingly positive review could easily be mistaken for sarcasm. At least he spelled "genius" right.

At any rate, none of this justifies the existence of the New Kids on the Block-copping The White Stuff or the Milli Vanilli parody that fails in any way to make fun of the fact that they were musical frauds. Nor does it forgive the fact that the music for When I Was Your Age and I Was Only Kidding is ripped off from other artists. I do have some affection for Off the Deep End; and I loved it when I was 14, but it's not Al's best by any stretch.

This is what happens when you put your fate in the hands of Amazon.com reviewers. God love them, but while reading through all 42 (!) 5 star reviews I think my IQ went down by about 5 points.

My choice for Al's best? In 3-D all the way. There are no weak links in the parodies and the originals are all inspired. The humor is by turns absurd and over-the-top, but never stupid, and there's even some subtle social commentary in Nature Trail to Hell and Gonna Buy Me a Condo. AND it marks the first appearance of the polka medley. Trust me on this one.

I'm also a Weird Al fan and I've recently been buying a few of his albums. At this stage "Even worse" is probably my favourite, also for sentimental reasons because it was the first album I ever purchased (shortly after its release if I remember).

"Off the deep end" was on my list as his next album to get because of the rave reviews. I'll definitely be taking your advice into account :-)

Anyway, keep up the great work!