* * *
I've just started this new feature and I'm already I'm questioning my methods. It's R.E.M.'s fault. See, by the ratings, one album stands above all others with a perfect 10 out of 10 rating. That would be their 1983 debut, Murmur. By no means do I deny its quality, but my research has given me misgivings about declaring it their definitive best. 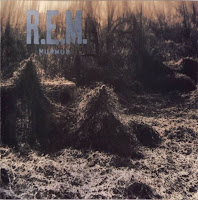 I'm not going to explain just why yet. That's just what we call an introductory teaser.

Let's look at the statistics first. The All Music Guide bestowed perfect 5 star ratings on three of the band's albums: Murmur, its 1984 follow-up Reckoning, and 1992's Automatic For the People (which featured the hits Everybody Hurts and Man In the Moon). Amazon.com breaks up the logjam, with only Murmur getting the full five stars. The other two had meager 4.5 averages. So that puts Murmur as the clear winner, especially when you consider that 150 of the 169 reviewers gave the album 5 stars. That's an unprecedented 89%.

Without a doubt, Murmur is a great album, from the immortal opener Radio Free Europe, to
the ringing Talk About the Passion, to Catapult, still one of the band's most thrilling songs. All Music Guide's Stephen Thomas Erlewine praises the "remarkably accomplished songwriting." Amazon.com reviewers broke out the hyperbole. Evan Streb says, "It's the greatest album ever made ever in the history of music since the beginning of time." Dale Chapman finds Murmur to be "a sanctified relic. The songs breathe life, poignantly document what it felt like to be a young person toward the end of the 20th century." And C.Garces claims, "This album should be mandatory to every human being, there would be no war in the world."

Others are on to my game. Prymel thinks Murmur "completely dwarfs everything else in the R.E.M. catalog" and Brian Rubendall paraphrases the Rock Solid motto:"If you own only one R.E.M. album, this should be the one."

So what's the problem? Well, in my mind, a band's masterpiece should be an album that's great outside the context of anything (genre, the rest of the artist's catalog, time period). Of course removing all context is impossible, but when a lot of the praise heaped upon a certain album mentions a certain context, that gives me pause.

In the case of Murmur, it's the fact that the album not only represented something so completely different from what was popular at the time, but that it predicted what was about to become popular. An inordinate number of reviews, both professional and amateur, picked up on this. The All Music Guide's bio of the band opens with the line: "R.E.M. mark the point when post-punk turned into alternative rock." Rolling Stone's review of the 2008 deluxe edition calls Murmur the album that invented 'alternative rock.' (giving short shrift to The Replacements, Husker Du, and other bands who married a punk spirit with melodic song structures.)

Many Amazon.com reviewers took the same line of reasoning while praising Murmur. Vinny Mac recalls: "I remember playing this CD for a friend of mine last year and his response? - 'That's not that original. It's just average, highly melodic pop-rock'. This is true, but when I told him it was made in 1983, his jaw dropped." An anonymous reviewer writes: "To fully appreciate the beauty of Murmur, you have to remember the creative wasteland from which it emerged. Between the macho, guitar-posturing of hair metal and the pretentious pap of new wave, the only real alternative in 1982 (remember?) was the punk scene. While many found an oasis in the underground-spirit of hardcore,those of us who occasionally enjoyed some semblance of melody and songcraft were still without a voice." Rocky Racoon simply titles his review "Resuscitated the Heartbeat of Music"

While I don't necessarily disagree with any of that, I also don't know that it automatically makes Murmur R.E.M.'s best album. Most significant? Sure. But as anyone who has read an old book that's considered "significant" and been baffled by it knows, cultural impact and great art aren't always the same thing. As I said before, Murmur is a great album, but it's not necessarily an original one (certainly not as original as some of the above reviewers might believe). The early R.E.M. songs had a direct lineage from the 60's melodic sounds of The Byrds (Laughing) Beach Boys (Pilgrimage) and especially the melancholy '70s jangle of Big Star (Talk About the Passion, Moral Kiosk, Sitting Still, etc.).

My personal favorite R.E.M. album (just behind 1996 dark horse New Adventures In Hi-Fi) is Automatic For the People, and one can make a good case for it being the true Rock Solid. See, Rolling Stone, my usual tiebreaker, was actually a tiemaker in this case. Steve Pond's original 1983 review of Murmur bestowed it with 4 stars, but the aforementioned 2008 review pumped it up to 5. That's a 4.5 average. Automatic For the People, on the other hand, got a 5 star rating from the magazine at the time of its release. If you're fast with math then you realize that makes it 14.5/15 for Murmur and 14.5/15 for Automatic.

And consider that Erlewine is not unequivocal in his praise of Murmur. He actually writes, "R.E.M. may have made albums as good as Murmur in the years following its release, but they never again made anything that sounded quite like it" and then in his Automatic For the People review he calls it a masterpiece and says, "R.E.M. have never been as emotionally direct as they are on Automatic for the People, nor have they ever created music quite as rich and timeless, and while the record is not an easy listen, it is the most rewarding record in their oeuvre."

The reason Automatic For the People is my favorite is the sheer number of classic tunes (Everybody Hurts, Man In the Moon, Find the River, Drive, Nightswimming, Sweetness Follows, The Sidewinder Sleeps Tonight). It's an assured album, an excellent balance between the early R.E.M. sound and their later, more pop-oriented one. It's by turns absurd and fun and deeply affecting, and it feels completely original, save for the purposefully derivative bits (the "hey kids / rock and roll" line on Drive is from David Essex's hit Rock On and the title and vocal on The Sidewinder Sleeps Tonight of course recall The Tokens' The Lion Sleeps Tonight).

But it's not R.E.M.'s Rock Solid because when we turn to my final tiebreaker, the percentage of 5 star reviews on Amazon.com, a winner emerges by a nose hair. I already told you about Murmur's 89%. Automatic For the People's score is 302 out of 369. That's 82%.

So, my methods may have let me down slightly on this debut outing, but I'm going to stick with them. Though it's fun to consider as an academic exercise, thankfully, there's no such rule that you can only own one album by any given artist. So why not get both?

Richard said…
If you want to make yourself look good, and you only want to own one R.E.M. album, buy Murmur.

If you want to play your one R.E.M. album over and over and continue to love it, buy Automatic for the People.
9:44 AM