For one shining moment in 1976, everyone thought the band Klaatu were the reunited Beatles in disguise. It turned out to be a false rumor based on some far-fetched and not-so-far-fetched coincidences, as well as some vague musical similarities.

What does that have to do with anything?

When my dad first told me about this, on a summer day in 1996, I wondered why more bands didn't release music under pseudonyms, just for the fun and freedom of it.

And then my dad told me about the British band XTC, who in the '80s had released an album as The Psonic Psunspots. He described their "Dukes of Stratosphere" album as Beatlesque and Beach Boyish. Sufficiently intrigued, I asked if I could borrow it sometime. But my dad didn't own the album; he'd checked it out from the Bloomington Public Library back when it was released in 1987.

That was the first time I'd heard of XTC, let alone the Psonic Psunspots, but I had a new mission. I vowed to find that record.

I was initially frustrated in my search. The Interweb was still in its infancy, so my only course of action was to scour the vinyl shops (I figured it was a fat chance that the record would be available on CD, but that didn't stop me from checking at Best Buy anyway). No luck, no Psonic Psunspots. At first I blamed the smallishness of my hometown, but when I repeated my search in the larger Quad Cities (where I was attending college), I was similarly skunked.

As my fruitless quest went on, I bought my first XTC album instead, 1989's Oranges and Lemons, at Target for $5.99. I loved it immediately, and from there, the dominoes fell. In quick succession I got Waxworks (a collection of early hits) and Nonsuch (1992) and then began filling in the band's back catalog. 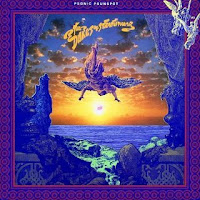 But the Psonic Psunspots continued to elude me. It wasn't until I got my hands on the All Music Guide that I discovered exactly why. There was no band by that name. My dad had actually gotten his facts reversed. XTC's psychedelic stand-ins were The Dukes of Stratosphear. The ALBUM was called Psonic Psunspot (if you look at the cover to the right you can see why my dad got confused; the album title is above the band name).

The next chance I got, I bought Chips from the Chocolate Fireball, the CD compilation of that album and its predecessor, 25 o'Clock, at Deadpan Alley, a record store in Normal, Illinois. I remember I purchased that and The Clash's London Calling at the same time. The hipster clerk was suitably impressed.

Since then, XTC have been firmly enshrined as one of my top 10 musical obsessions of all time, along with The Beatles, The Monkees, "Weird Al" Yankovic, Talking Heads, Prince, Billy Joel, Elton John, They Might Be Giants, Matthew Sweet, and The Beach Boys. If you've been following 3 Minutes, 49 Seconds for awhile you'll note that the first 4 have been the subject of every-album-reviewed projects. Now, XTC is going to be the fifth.

I've already got a nice little headstart. I covered their 1977 debut, White Music, in 2004. Their second album, Go 2 (1978), served as the band's Rock Bottom entry. Oranges and Lemons and Wasp Star (2000) reviews came as part of my yearly one-decade-ago series. Finally, I wrote about their 1999 live box set Transistor Blast in my college newspaper. Over the next few months I'll fill in the gaps. I'm looking forward to spending some quality time with each of their records, and sharing the results with you.

Oh, and about 6 years after my dad introduced me to XTC, he and I attended a remaindered book sale at the Bloomington Public Library. They were selling off most of their vinyl, and there, for the price of $1.oo, was The Dukes of Stratosphear's Psonic Psunspot, the very copy my dad had checked out in 1987. They had a couple of Klaatu albums as well, but I passed.

Richard said…
I am going to love this series! You have given me a great many things in the last dozen years of friendship, but an appreciation for XTC is one of the coolest.
8:08 AM

Barely Awake In Frog Pajamas said…
I was at IU during the same time as your dad (and now I feel old).

Anyhow, I had a friend from high school (and IU) who was an obsessive XTC fan and had exposed me to the band years before, so, when the DOS record came out, I was well aware of the deal.