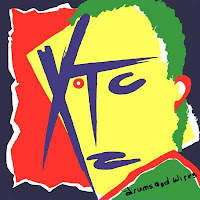 Barry Andrews, whose keyboard was an integral part of the early XTC sound, left the band in 1979 due an internal struggle with guitarist/songwriter/singer Andy Partridge. Andrews saw them as equals; Andy saw himself as the leader.

So it's ironic that the first post-Andrews album, Drums and Wires, finds a new challenger to Partridge's supremacy. Bassist Colin Moulding, who had contributed 3 awful songs to White Music and 3 mediocre ones to Go 2, made an amazing leap in songwriting on the album. In fact, he wrote all of the album's singles, including the song that stands as the band's third-biggest hit, Making Plans for Nigel.

Mostly thanks to the catchiness of that song (and Life Begins at the Hop) and the introduction of talented guitarist Dave Gregory as Barry Andrews' replacement, the common belief is that Drums and Wires was the debut of XTC as a guitar-based melodic pop group (rather than a new wave punk band). But the full album doesn't quite support that theory. It's actually a transitional work, with the post-punk/new wave sound of their first two albums mellowing only slightly. The album's second side is especially filled with manic, rhythmic, off-kilter, and borderline-experimental songs.

All of those side 2 songs happen to be Andy compositions. And if he was taking baby steps musically, lyrically is where he was making true strides. Of course there are the requisite girl songs: In Helicopter he compares a particularly elusive woman to the titular vehicle, and throws in a bad pun for good measure ("I object to all the air male that she pick up"); the jagged When You're Near Me I Have Difficulty is a love song, listing the ways the narrator is affected by a certain girl: "When you're near me I have difficulty concentrating, When you're near me I have difficulty respirating." But on other songs, Partridge looks beyond romance and to the larger world.

Real by Reel seems to eerily predict the rise of reality television, but Andy was probably writing about the rise of Big Brother style privacy invasions. Witness the final line of the song: "Now I lay me down to sleep / Knowing that your lenses peep / Now I eat my daily bread / And into the tape spool I'll be fed." It's a catchy tune, with a sprightly solo from Gregory. In Roads Girdle the Globe Andy likens driving to a religious experience, but given his views on religion, it's hard to see this as positive. And Complicated Game, which Partridge sings with short staccato breaths as if someone is patting him on the chest while he performs, is seemingly about the pointlessness of divisive politics (hmmm, sound timely?). Like Swift before him, Andy masks his views in allegory: "A little girl asked me should she part her hair upon the left, no / A little girl asked me should she part her hair upon the right, no / Someone else will come along and move it."

Outside World confirms his disenchantment with the state of existence. The song's narrator is enamored of a woman who's oblivious to the troubles of the world. Instead of condemning this ostrich-like behavior, Partridge wants to join her: "Just make a little space for me," he sings, "I'm coming in."

Andy's contributions are rounded out by fluffier fare. Scissor Man is a fun and creepy take on the story from the morbid children's story collection Struwwelpeter. It's a great song. Millions, however, is Andy's worst song on the album, is musically repetitive, with mostly inscrutable lyrics about China.

As for Colin, his two afforementioned singles, Life Begins At the Hop and Making Plans For Nigel, are mini-masterpieces. On the former, Gregory's guitar sound plays a prominent part right away right away and "ooh-ooh-ooh-oo-oo" background vocals add to the party atmosphere. It's a song about going out and listening to music. The latter is a bit deeper, concerning the titular Nigel, whose parents want him to get a factory job. Colin's dismay at the prospect of a life of blue collar labor is palpable, though Nigel himself remains silent on the subject. The album's third, final, and least commercially successful single is Ten Feet Tall, a charming little love song with not one but two great guitar solos.

Colin finishes his contributions with two lesser tunes that are repetitive of themes in Making Plans for Nigel, Day In Day Out (about the monotony of a factory job) and That Is the Way (a list of parental dos and don'ts). Both are both musically uncompelling, though the fugelhorn on the latter is a nice preview of XTC's mannered future.

Overall, Drums and Wires is an enjoyable album that feels somewhat like an unfinished sketch. It sounds great, and the production by a then-untested Steve Lillywhite (he'd go on to produce Talking Heads, U2, Dave Matthews Band, and Peter Gabriel among others) is strong, but as an XTC album it's not quite there yet. in some places the pop instincts are there, and in others the lyrical complexity is, but rarely do they meet. It wasn't until XTC could combine the two consistently that their true brilliance would emerge.

Richard said…
Question: If I have Fossil Fuel, which includes Making Plans for Nigel, Life Begins at the Hop, and Ten Feet Tall, is this an important addition to my collection? Are there other must-have songs?
7:46 AM

Paul V. Allen said…
As sacrilegious as this might be for an XTC fan to say, no, you probably don't need to own Drums and Wires. I'd say the only songs you are truly missing out on (beyond the three on Fossil Fuel)are Scissor Man and When You're Near Me I Have Difficulty, but you could always download them.
12:12 PM