January 14, 2010
The one constant in every established artist's oeuvre is the bad album, the one that's reviled by both fans and critics. Those unlovable albums are the ones this feature, Rock Bottom, is concerned with.

Back in 2005 I reviewed every single Talking Heads album, but that predated the Rock Bottom feature. So here it is retroactively.
Talking Heads, despite their storied career, had two albums in a statistical dead heat for Rock Bottom status. Perhaps not coincidentally they're also the band's final two albums, 1986's True Stories and 1988's Naked. The band were in an intrapersonal decline by this point, with the divide between big head David Byrne and the rest of the group getting larger and larger. Their music, which had so thrived on chemistry and cooperation, couldn't help but be affected as they limped to an inevitable break-up.

So which one gets the nod? Though each received a score of 6 1/2 out of 10 stars on the combined All Music / Amazon.com scale, Naked received kinder reviews overall, including an absolutely glowing piece by Rolling Stone writer Anthony DeCurtis. That makes True Stories our culprit. 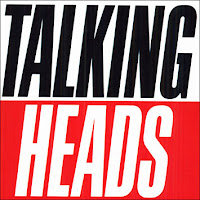 True Stories was accompanied by a Byrne-directed film of the same name, but it isn't the soundtrack. Rather, it's Talking Heads' versions of songs that were sung by actors in the film (a real soundtrack featuring those versions was released as well). Reportedly, Byrne didn't want it to be that way, preferring to distance the film from Talking Heads as much as possible. But ultimately he gave in, realizing it might mean more exposure for his movie. So, to start with we've got an album that the principal contributor didn't want to make. That's never a good sign.

There's also the matter of artistic growth, or the lack thereof. After a series of masterpieces, the Heads took a diversion into simple pop on 1985's Little Creatures. True Stories didn't feature a return to the band's innovative ways. In fact, it was just the opposite. The band seemed to be getting MORE conventional. To hear All Music's Michael Hastings tell the story," its songs were dismissed as self-consciously quirky retreads of other, better material." Now Hastings isn't necessarily a proponent of that view. In fact he thinks the album, while not up to the usual Talking Heads snuff, has its charms. He even says, "the band's skill at arranging an album and maintaining a mood remains intact."

Rolling Stone reviewer Mark Coleman goes even farther. Check out this statement: "Talking Heads continue to delve into their American musical roots, and for my money it's a more sensible and successful mission than their pith-helmeted foray into Africa on Remain in Light." Did he just say what I think he just said? Did he just say that True Stories is better than what most consider the band's best album? This alone is enough to dismiss Coleman's credibility. Let's just move on.

What about the Amazon.com reviewers? Michael Stack concludes that the record, "sounds and feels nothing like a Talking Heads album and falls far short of delivering the goods." Okay, that didn't tell us much. Tashcrash gets a bit more specific: "There is something rotten at work here, from the stiff-rock opener Love for Sale to the made-for-MTV schmaltz of Wild Wild Life to the brain-dead closer City of Dreams." K. Peterson declares, "Even the swan song Naked is better than this one. If you like early/mid era Talking Heads, skip this one, or get it cheap if you must. I have nothing against Americana, or even attempts at arch commentary on the ersatz quality of much that comprises Americana; but dull is dull." (As an aside, seeing a phrase like "arch commentary on the ersatz quality" in an Amazon.com review is kind of like seeing a 6th grader in a Kindergarten classroom.)

I think Fabian Valdivia says it best. This is translated from the Spanish: "The only good thing that I can say of this disc is that it gave the name to the best group of the present time (Radiohead)." He's referring to the True Stories song Radio Head, by the way.

Personally, I think that while True Stories is Talking Heads worst album, I don't think it's necessarily a bad one. It only suffers a bit in comparison to the, yes, heady heights of the Talking Heads' career. If you want a true Talking Heads related debacle you have to go outside the confines of my the above-listed rule #3 and listen to 1996's Byrneless No Talking Just Head. That record makes True Stories sound like, well, a good album.

Barely Awake In Frog Pajamas said…
I remember being fairly amibivilant about both True Stories and Naked. Maybe because I'd been a fan of the Heads' earlier stuff and Little Creatures had been a major part of the soundtrack of my senior year.