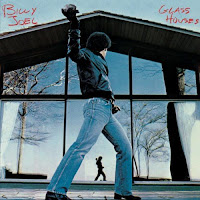 Billy Joel had wowed the pop music audience with the one-two punch of The Stranger and 52nd Street in 1977 and 1978 respectively, and the big question surrounding his 1980 follow-up, Glass Houses was: "Will success ruin Mr. William Joel?"

The answer is no, success didn't ruin him. But certainly didn't make him happy, either. Glass Houses' songs are full of doubt, alienation, anger, loneliness, and self-loathing.

Just a Fantasy finds Joel lonely on the road and pleading to his girl for relief: "I know it's awful hard to try to make love long distance / But I really needed stimulation / Though it was only my imagination" (Yep, he's asking for phone sex). All for Leyna concerns a young man who has become hopelessly obsessed with a one-night stand who wants nothing more to do with him. In Sleeping With the Television On the narrator tries to get up the courage to approach a girl, but just can't do it: "I really wish I was less of a thinking man / And more a fool who's not afraid of rejection." I Don't Want To Be Alone is about two lovers who are together for all the wrong reasons. And in Close to the Borderline, Joel straight-up admits he's losing it. And you thought Weezer's Rivers Cuomo pioneered the art of uncomfortable pop confessions!

Even the hits on the album trade in turmoil, self-doubt, and anger.

Opener You May Be Right challenges the "piano man" tag, with a memorable guitar riff and a complete lack of ivory-tickling. The lyrics are addressed to an unnamed "you" who suspects the narrator is mentally unbalanced. While he declines to confirm or deny her accusation, he believes she prefers him as he is. In this way it's like a twisted, unhealthy version of Just the Way You Are.

In the Latin-tinged Don't Ask Me Why the "you" is also unspecified, though the person in question has achieved great success ("All the waiters in your grand cafe / Leave their tables when you blink"). At first it seems like a withering putdown of an uppity woman, a la 52nd Street's Big Shot and Stiletto, but I suspect Joel wrote the song about himself, questioning the reasons for his sudden stardom and the perks that came with it. This self-reflective interpretation also fits with the album's title and the idiom it comes from: "Those who live in glass houses shouldn't throw stones." The house on the album cover? It's Joel's. Yep, he's throwing stones at his own glass house.

The final hit of the album is It's Still Rock and Roll To Me. Widely interpreted as a cynical response to the rise of punk and new wave, in wider view it's also a commentary on the fleeting nature of "cool." Musically, it sports a throwback rockabilly strut, so it's ironic that the song rocketed up the charts and became Joel's first #1 single.

Only the Freaks and Geeks-utilized C'Etait Toi (You Were the One) and the closer Through the Long Night are anywhere near life-affirming. The former is a love song wherein Joel sings the three verses in English and translates those same verses into French. (Note that Don't Ask Me Why featured the line, "Now you parlez-vous Francais," further proof that Joel was singing to himself.) Through the Long Night isn't exactly a happy tune, what with all the lines about bad dreams, old fears, and past sins, but it's a comfort and a love song and a lullaby all in one. Check out this ending: "No I didn't start it / You're brokenhearted / From a long, long time ago / Oh the way you hold me / Is all I need to know / And it's so late / But I'll wait / Through the long night / With you." The multi-tracked Joel harmonies are mighty pretty too.

Despite its many charms, Glass Houses is definitely the weakest album in Joel's amazing 1976 - 1983 run (Turnstiles, The Stranger, 52nd Street, Glass Houses, Nylon Curtain, An Innocent Man; 35x platinum sales, 7 top ten singles) but that's okay. It's kind of like being the worst player on the team that wins the World Series. You're still a champ no matter what.

Grade: B+
Fave Song: Through the Long Night