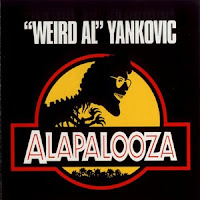 Even for "Weird Al" Alapalooza is a weird album. A surprising contender for Rock Bottom status (though it fell just short), this 1993 opus contains some of Al's best work, as well as some of his most puzzling.

Song Parodies:
We start with Jurassic Park. Sometimes Al's parodies are all about the subject matter and sometimes they're about the song (in rare cases it's both). Jurassic Park is all about the subject matter; the movie was a massive hit in 1993. The song (Richard Harris' 1968 hit MacArthur Park), though it fits very well lyrically, is in odd choice, mostly because it's so anachronistic in context with the other, more modern, song styles on the album. It's also strange that Al chose to sing the song from Jeff Goldblum's character's point of view ("I admit it's kinda eerie / But this proves my chaos theory"). And remember what I've said before about a bad song making for a bad parody? It holds true here.

Achy Breaky Song ALMOST breaks that rule. While Miley Cyrus' dad's song was never very good, Al's take is interesting because he doesn't pull any punches and ends up being somewhat hypocritical. For one thing, he makes the song about not wanting to hear the song, which is enough to give you a slight headache if you think about it too much. It's like hiring Dick Cheney to write a criticism of George W. Bush's presidency. Also, the song's narrator lists supposedly bad musicians he'd still rather hear over Billy Ray, including Donny and Marie, New Kids on the Block, Barry Manilow, Village People, Bee Gees, Slim Whitman (the second time he's been referenced in an Al song, by the way), Yoko Ono, Tiffany, Vanilla Ice, ABBA, Debbie Boone, and Gheorghe Zamfir. It saddens me a little bit to hear Al buy into the hipster "uncool" dynamic because I like to think of him as someone who loves all kinds of music (and it's worth pointing out that Al had already parodied three of those 12 musicians). Of course none of this makes Achy Breaky Song good, it's just interesting to think about.

Next is Bedrock Anthem, another tune in the grand tradition TV show descriptions put to pop songs (see also: Ricky, The Brady Bunch, Money For Nothing/Beverly Hillbillies, and Isle Thing). This time it's a mash-up of Red Hot Chili Peppers' Under the Bridge and Give It Away, with mildly funny lyrics about The Flintstones ("Got a neighbor by the name of Barney Rubble / He's a midget but he makes a lot of trouble / Doesn't like to shave; he's got caveman stubble").

Finally there's Livin' in the Fridge, a take on Aerosmith's 1993 hit Livin' on the Edge. I know it's shocking to hear Al take a pop song and make it about food, but it did actually happen. As it is, it's the least interesting and clever of the four parodies on Alapalooza, and falls victim to the eternal "Weird Al" parody problem. Say it with me: The title is the extent of the joke.

The album's first style parody is Young, Dumb, & Ugly, which would seem to be about the grunge trend that had overtaken pop music by '93, as well as an indictment of commercialized, suburban rebellion. It would seem to be a no-brainer to use a Pearl Jam / Soundgarden musical landscape and call it a day, but instead Al does the song in an AC/DC / Twisted Sister style.

And then there's Traffic Jam, about a poor soul who is, yes, stuck in traffic. Musically, Al goes back to Prince's 1984 hit Let's Go Crazy, not parodying but getting so close to that song's distinctive keyboard line as to risk plagiarism. Why choose a song that was, at the time, 9 years old? Maybe it's because Prince had declined to allow Al to parody the song in the past.

So we have two songs with poorly off-kilter style choices, and then things get even stranger. Alapalooza features not one, but TWO songs based on Peter Gabriel's style. Talk Soup, believe it or not, was written as a theme for the E! show of the same name. In the spirit of In 3-D's Midnight Star (which listed crazy tabloid topics), Talk Soup lists the ridiculous themes of episodes of Rikki Lake, Maury Povich, Sally Jesse Raphael, Phil Donahue, etc. (eg. "I'm just a cross-dressin' alcoholic neo-Nazi porno star"). Musically the song is a sibling to Gabriel's 1992 hit Steam. Waffle King is the other Gabriel-by-way-of-James-Brown tribute, this time to 1986's Sledgehammer. Lyrically, it's about a guy who makes good waffles and is proud of it.

We also get Harvey the Wonder Hamster, a very short theme from Al's MTV hosting gig, and She Never Told Me She Was a Mime, a Rolling Stones-indebted tune that's about...well...reread the title.

Overall, a very poor showing on the style parodies, which is sad because 1) They're the majority of the album, and 2) they're usually Al's strong point. We could write Alapalooza off as a fluke if not for the final style parody, Frank's 2000" TV, which is one of my top 5 Al songs of all time! Done in a clear-but-not-derivative R.E.M. style, the song details the story of the titular Frank who buys a ginormous TV. The song is strangely spiritual, while at the same time making a clear statement about our proclivity for excess and to keep up with the Joneses.

Polka:
It's just "polka" this time, no "medley" because for the first time Al decided to do an entire song polka style. That song? Queen's 1975 hit Bohemian Rhapsody, which had been repopularized by its use the movie Wayne's World in 1992. Al's version is faithful and fun.

And there you have it, one of Al's strangest albums, and not necessarily in a good way.