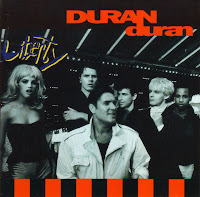 When I chose Duran Duran's Liberty as 1990's representative, I didn't really know what I was getting into. I picked up the album very cheap at the end of last year, and it spent a couple of weeks on repeat in my CD player. Since I'm pretty much ignorant of Duran Duran beyond their hits, I thought it'd be a fun album to investigate and review.

Wouldn't you know that in the course of my research, I discovered that Liberty is considered Duran Duran's worst album! Now, I'm not really including it as part of the Rock Bottom feature for a couple of reasons. One is that I don't have an enough expertise on the band's oeuvre to make a good judgment call, and the other is that Rock Bottom rule about "missing vital members." Duran Duran has a complex personnel history, but there's an agreed-upon Fab 5 (even though that line-up was only responsible for 4 of the band's 12 studio albums). That makes it tough to truly compare their albums. In Liberty's case, Andy and Roger Taylor were not with the band. They had been (seemingly) permantly replaced by Warren Cuccurullo and Sterling Campbell on guitar and drums (the latter stayed only a year; the former was with the band until 2001).

Regardless of its circumstances, fans and critics did not enjoy Liberty. The AllMusic Guide gave it one star. Amazon.com fans found countless ways to name it the band's low point. Even singer Simon LeBon said of the record: "I don't think we got it right; I don't think we were paying enough attention." But you know what? Maybe I need my ear checked, or maybe my Duran Duran ignorance is preventing me from seeing the whole picture, but overall, I think Liberty is a pretty good record.

The ballad Serious is the album's calling card. Though not a big hit, it was included on their 1998 Greatest compilation and is one of their best songs. It's also a clear precursor to the thoughtful, mannered sound of subsequent hits Ordinary World and Come Undone (both from 1993's Duran Duran album). My Anarctica is along the same lines, a great lost ultra-melodic ballad from the band, with dreamy shades of Avalon-era Roxy Music. I think it's about a girl who's cold and unexplored, but that's all I can really discern.

The biggest surprise of the album is the band's use of '80s stye funk. It suits them well. Opener (and semi-successful first single) Violence of Summer (Love's Taking Over) has a loose feel and a keyboard line worthy of Prince. The chorus, however, is pure Duran Duran. The excellent title track is an R & B / synth-pop hybrid in the George Michael manner. The pre-chorus sports a strong, memorable melody, while the chorus itself is all about the horns and background vox. Lasting First Impression and Can You Deal With It mine similar territory.

The socially-minded Hothead features samples, a funky guitar lick, and a brief attempt by LeBon to rap. Even if it doesn't quite work, I give the band points for trying something new.

Though its spirit of experimentation is admirable, Liberty stumbles when it puts trickery before melody. Think U2 on Zooropa. All Along the Water is as percussive and propulsive as it is repetitive and insubstantial. Read My Lips has its merits, but is a bit too tricked up, to the point that it becomes undistinguished dirty rock. Album closers Venice Drowning and Downtown are best forgotten all together.

Again, since the only other Duran Duran albums I've heard in their entirety are Duran Duran (The Wedding Album) and Astronaut, I'm in no position to declare Liberty either their best or worst. But it is an album with at least 6 good songs and only two kinda awful ones. Plus,the title track, Serious, and My Antarctica all deserve to be in any discussion of the band's greatest singles. It just goes to show that the difference between "worst album" and "forgotten gem" is in the ear of the behearer.

Barely Awake In Frog Pajamas said…
I've owned half of Duran Duran's albums and have hear the rest and, as I recall, I thought Liberty was pretty atrocious.

Of course, I haven't heard it since 1990. Your review is making me think I might have to give it another listen.
6:55 PM

Ellen said…
It's pretty brave of you to give "Liberty" a listen. Like Barely Awake In Frog Pajamas, I also thought it was atrocious, but that was back in 1990. I should probably listen to it again.

Nevertheless, "Serious" has been one of my favorite Duran songs.

Cheers from a longtime Duranie
10:59 AM

オテモヤン said…
This comment has been removed by a blog administrator.
7:28 AM