So You Wanna Be a Rock 'n Roll Critic: Lesson 4

September 04, 2009
Welcome to So You Wanna Be a Rock 'n Roll Critic, a ten-part instructional feature that will provide you with all the tips and tricks you need to become a real life music reviewer. As a matter of process, I've taken these lessons from exhaustive research into printed music reviews in Entertainment Weekly, Q, The New Yorker, Musician, Rolling Stone, and Spin. Additionally, I've looked into the uberhip perspective of Pitchfork.com and read several pieces by the godfather of music reviewing, Lester Bangs. And finally, I have not shied away from an examination of my own work here on 3 Minutes, 49 Seconds.

Let's think about the word "criticism" for a moment. By definition it's simply another word for "evaluation" or "analysis", which could have a negative or positive connotation. But in common usage, it's usually considered to be something bad, a pointing out of flaws. You must keep this latter definition in mind as you write. Being a critic is not about joy, it's about finding fault.

As a teenager, I told my dad that I might like to be a movie reviewer for a living. At the time, I couldn't imagine a more alluring lifestyle: I'd see three to five movies a week, write about them, and cash the check. My dad had wisdom about this that. He told me that becoming a movie critic is condemning yourself to hating films. I didn't understand him at the time, but now I see it clearly. The critic's job is find imperfection. Imperfection leads to abhorrence.

So it is with music criticism as well. If you work hard enough, you will come to a point where your tastes become so refined and finely-tuned that you will rarely find pure joy in a song or album. I must point out that Lesson 3 is key in this case. Just automatically, because of the sheer volume of uncool musicians out there, you're going to hate about 90% of what you hear.

As usual, this begs some questions:

1) If I have a hatred for a musical artist, is it unfair for me to agree to review their album?
No. Your hatred will fuel some of your best, most pithy writing. If you become a professional music reviewer it will be easy, because you'll often be assigned albums by crappy bands. However, if you are an amateur and make your own review choices, resist the urge to only review albums that you adore, or about which you have conflicted, complex feelings. Pick the easy targets. That way you'll never miss. 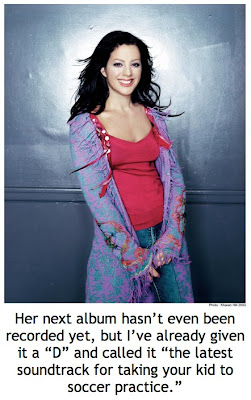 hat's how the professionals do it. Consider Spin's Andrew Beaujon's review of Fiona Apple's 2005 album Extraordinary Machine. In the second line of his review (the first being a paraphrase from Apple's song Criminal), Beaujon claims, "six years ago, it seemed like Fiona Apple was out of our hair forever" and goes on to detail her history of erratic behavior. He throws some backhands when he praises Apple for avoiding her usual "tendency to plod" and "reigning in her fondness for fingering her thesaurus." In this case, Beaujon was pleasantly surprised by the album, but still displays a clear bias against its creator.

Rob Mitchum (Pitchfork.com), in a piece about Red Hot Chili Peppers' Stadium Arcadium record, says the band's career consists of "progressively diluted funk songs about California, sex, and having sex in California." A more incisive summary of 8 albums and 22 years worth of work you'll never find.

In my review of Fountains of Wayne's Traffic and Weather, I pointed out that Paste magazine writer Marc Hirsh was writing with a clear hatred of the band. The second sentence of his review goes like this: "Still writing songs as if the goal was simply to get from rhyme to rhyme, they remain far too impressed with their own cleverness...". At the time I condemned him for even choosing to review an album by a band he hates, but now I see the light.

2) What about keeping an open mind?
No. You don't even need to listen to the new Sarah McLachlan album to know it sucks. The bad part is that, should you choose to review it, you will have to listen to the album. But take comfort in the fact that you only need to listen once, and even then probably not all the way through every song. You'll just need to hear enough to be able to reference the songs, some lyrics, and to find anything that fits with your preexisting theory that it is awful, awful music.

Pitchfork.com's Brent DiCrescenzo (who once told the Dallas Observer that "writing about music is not all that interesting to me.") took on Steely Dan's 2000 comeback album Two Against Nature with that exact approach. In fact, he took it even farther. Not only does he display a contempt for the band, but for those who he imagines as their fans as well. His intro begins with the following line: "If you are a die-hard Steely Dan fan from 'back in the day' let me congratulate you on figuring out how this whole 'Internet' thing works." He goes on to label them as "pony-tailed Jeep drivers and terrier-walkers." Do you see what I mean about writing from a hateful place? It allows you to throw around bon mots like confetti. 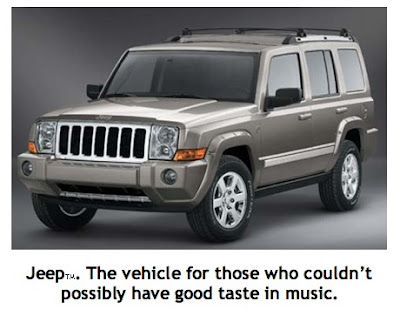 And DiCrescenzo doesn't even mention a single song in his entire review. It's as if he didn't even listen to the album. Indeed, it seems DiCrescenzo is offended by the very idea of Steely Dan, not just the fact of them coming back after a 20-year gap, but by them ever having existed at all. "Amazingly," he says, "Steely Dan's name has been popping up as a hip musical crush. Remember, this glossy bop-pop was the indifferent aristocracy to punk rock's stone-throwing in the late '70s. People fought and died so our generation could listen to something better." If you, as a writer, can similarly concentrate your vitriol so well, the world of music criticism will be your oyster.

3) What about new artists? How do I know if I should hate them or not?
This is one of the toughest parts of the job, because often you don't know right away. Of course there are certain artists, ones with Disney shows or ones who are movie or reality stars, that you can dismiss easily. But some new artists are difficult to peg. My best advice is to rely on your instincts and do your best. There is a trick to saving face, and I will reveal it to you if you promise to use it well. Here it goes. If you end up praising an artist that later turns out to be uncool, you just wait until their second album and say that the band obviously used up all of their good ideas on the first album. If you give a bad review to an artist that turns out to be cool, you just use the occasion of their second album to express your utter shock at how they've improved.

4) Is it possible that someone else might have a different opinion about an artist or album I hate?
Yes, but that person is an idiot. Lesson 9 will provide more detail.

5) If I hate 90% of music, am I really a music fan?
Yes! Remember, music criticism is not about joy. It's about image and lifestyle. If you meet a smoking hot girl with a terrible personality and she takes a liking to you, the only smart choice is to marry her, right? You're going to be miserable most of the time, but everyone will be jealous of you. That's what it's all about.

And that's about it for this lesson. I hope it has helped you realize that your cynicism, rage, anger, and general unhappiness can be a powerful force for good. Next week we'll learn about music criticism as academic pursuit. It's called Lesson 5: I'm Looking Through You. See you then.