September 22, 2009
The one constant in every established artist's oeuvre is the bad album, the one that's reviled by both fans and critics. Those unlovable albums are the ones this feature, Rock Bottom, is concerned with.

Innovative as always, U2 have given us another first. In every other case where a band has had two or more albums vying for Rock Bottom status, I was able to find some tiebreaker. In U2's case, they have two records that are statistically indistinguishable. What's more, neither is the record I expected to be considered their worst.

I was sure 1993's Zooropa would be the musical nadir of Bono, Edge, Larry, and Adam. It has no real standout tracks and is definitely my own personal least-played of their CDs. But according to my established criteria, that album is only the band's fourth-worst. Their second album, October, is not exactly beloved, but it still ranks above two others, 1989's Rattle & Hum and 1997's Pop.

Therefore, we have our first co-rock bottoms. 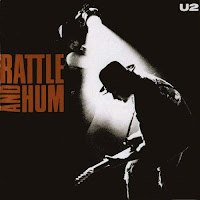 Let's start with Rattle and Hum. After the massive success of The Joshua Tree, a plain old follow-up album apparently wasn't sufficient, so U2 made a documentary of their 1987 tour of the U.S. The accompanying soundtrack album is a mix of 7 live tracks (including 2 covers) from that tour and 10 newly-recorded tracks.

Good old Stephen Thomas Earlewine labels the album "tentative" and "all over the place." Most Amazon.com reviewers center their hatred on 1) the cover songs, 2) Bono's between-song banter on the live tracks, and 3) a lack of cohesiveness. For example, E.Becker says U2 "are not very good live musicians and that juxtaposed with their self important preachiness has not worn well through the years." Rolling Stone's Anthony DeCurtis said in his 1989 review, "But for all its excitement, Rattle and Hum seems a tad calculated in its supposed spontaneity" and that the album is "the sound of four men who still haven't found what they're looking for."

I agree with the criticisms overall. Rattle and Hum has a lot of problems. The cover songs only serve to illustrate that U2 shouldn't do cover songs. Album opener Helter Skelter, which Bono portentously introduces with the comment "This is a song Charles Manson stole from the Beatles; we're stealin' it back," is plodding and awkward, with Bono flubbing lyrics left and right. Dylan's All Along the Watchtower was an unoriginal and self-defeating choice since Hendrix already did the ultimate version. Same story with the brief guitar version of The Star Spangled Banner. Stop me if you've heard that one before. The live versions of songs from previous albums, I Still Haven't Found What I'm Looking For (with a gospel choir), Pride (In the Name of Love), and Bullet the Blue Sky are all fine for a film, but feel superfluous on the album. The latter ends with some stage patter from Bono, affecting a southern accent and denouncing TV evangelists.

Where Rattle and Hum shines is in the studio tracks. The U2 classics Desire and All I Want Is You hail from here. Angel of Harlem shows up. Collaborations with B.B.King and Bob Dylan (When Love Comes to Town and Love Rescue Me, respectively) are serviceable if not outstanding. Hawkmoon 269 sounds like the title of a sci-fi film but is actually a tough-minded ballad, and has to be one of the band's greatest lesser-known songs. And God Part II, despite its dodgy premise (let's make a sequel to John Lennon's God but not use the same lyrical structure or melody at all), presages the electronic-tinged lowdown-and-dirty rock of Achtung Baby that would soon follow, and is redeemed by Edge's guitar pyrotechnics. Heartland and Van Dieman's Land (featuring Edge on vocals!) are worthwhile as well. The only real clunker is Silver and Gold, which is a fine song, but ends with a laborious spoken passage wherein Bono delivers a sermon on apartheid. Save it for VH1 Storytellers and let the lyrics speak for themselves.

So, overall, Rattle and Hum is an album that simultaneously contains everything that people might love and hate about U2. But what about Pop? 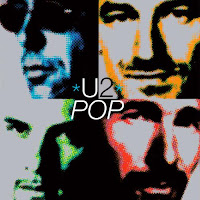 That album was the follow-up to Zooropa, and was released at the height of the electronica "craze" that swept across music, allowing acts like Fatboy Slim, Massive Attack, Daft Punk, Portishead, and even Bjork to creep into the mainstream. What's more, established acts like Madonna and Smashing Pumpkins made albums influenced by the sound (Ray of Light and Adore, respectively). Pop was part of the same trend, though to be fair the band had already been moving steadily in that direction since Achtung Baby in 1991.

Earlewine found merit in the album, but little joy. He sums it up as "easy to admire, hard to love." Amazon reviewers were less kind. Masochistic Carl Mack says, "I still have this CD and every once in awhile I pop it in to see if maybe by some miracle I am missing something." Joseph A Gaizutis remarked that, "the latter part of the CD is complete crap. Sort of like some of early Pink Floyd's worst songs." Curiously, Neel Aroon finds the album to be "a weak attempt to recapture the time when their music was still groundbreaking and well written." One wonders if he would be happier had U2 not tried make well written music. Fransicso Jose Villanueva finds an interesting comparison, "This Pop of U2 it is equivalent to at the time to Hot Space of Queen," which despite the tortured translation is actually a pretty good analogy in that both albums find established bands trying their hand at dance music. The comparison fails when you learn that Hot Space was a huge success, with Body Language and Under Pressure becoming hits.

Barney Hoskyns, writing for Rolling Stone, gushed over the album and addressed those who wanted to jump on the "U2 have lost it" bandwagon after being disappointed with Zooropa and Pop: "Well, if people have stopped caring, it won't be U2's fault. With Pop, they've defied the odds and made some of the greatest music of their lives."

My take? Pop is not as bad as all that, nor is it as good as all that. There are gems, especially among the disc's first six songs. Discotheque makes a righteous stomp and If God Will Send His Angels is a great ballad. But the second half falls off dramatically, with If You Wear That Velvet Dress and Miami especially stretching the limits of a listener's patience. That said, the album is certainly no worse than Zooropa, which also starts somewhat strong before wandering off into the wilderness at its midpoint. So why then, does that album get a pass while Pop gets the shaft?

I think it's the same effect I mentioned in my Weezer Rock Bottom, wherein Make Believe suffers a worse reputation than its inferior predecessor, Maladroit. My hypothesis is that fans and critics will forgive a band one disappointing album, but if another follows it immediately, they turn like a jar of mayo left out in the sun.

And thus my final word on U2's Rock Bottom is as follows: While Rattle and Hum is bizarrely sequenced and features some poor choices, it still contains some amazing highs. Pop probably doesn't deserve the level of vitriol it receives from fans and critics, but it's not a great album by any stretch. My choice then, is Zooropa. Even though the fans and critics may have found several merits in it, I really don't. I'd rank it just a hair's width worse than Pop, and thus, Rock Bottom.

Anonymous said…
For me, I would say the worst U2 album is Pop, perhaps that's the reason because the next album (ATYCLB) is a real pop album :)
10:19 PM

Uncle E said…
I'm really loving these rock bottom posts, I gotta say! But I also have to point out a minor error in an otherwise excellent overview of U2, and it doesn't have anything to do with U2, but rather Queen. You state: "The comparison fails when you learn that Hot Space was a huge success, with Body Language, Under Pressure, Another One Bites the Dust all becoming hits." Well, Another one Bites The Dust was on The Game album, not Hot Space. A minor gripe in an otherwise excellently researched entry!
10:06 AM

Paul V. Allen said…
Thanks for the kudos and the fact-correction Uncle E! I've fixed the error.
11:33 AM