October 19, 2008
The one constant in every established artist's oeuvre is the bad album, the one that's reviled by both fans and critics. Those unlovable albums are the ones this feature, Rock Bottom, is concerned with. 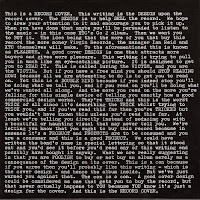 On this there can be little argument. Even the most die-hard XTC fan will not bend too far backwards defending their second album, 1978's Go 2. Nor will critics. AllMusic Guide's Chris Woodstra says: "Recorded in a rush... Go 2 predictably suffered...the material is considerably weaker this time out." At the time of the album's release, British magazine Trouser Press pointed out that the sound of the record seemed more important than the songs themselves.
While there are some supportive fans, the Amazon.com reviews of Go 2 can be summed up by an anynomous poster who said, "it falls short from the usual excellence with which XTC has rewarded its admirers."

And once again, as has happened on a surprising number of these entries, we have the artist weighing in. Lead XTC man Andy Partridge summarized Go 2 like this: “Four weeks worth of songs, hastily scribbled on hotel notepaper and beermats. We were living out of carrier bags and in rental vans, making nasty noises at each other and with each other. Something had to give and here it is.” Amazon.com reviewer J.Garratt paraphrases a Partridge interview: "he likens seeing a copy of Go 2 in a Virgin Megastore to seeing a blown up photo of your teenage self being projected over Times Square. The whole world can see your messy hair, your acne, your yellow teeth, etc."

The album definitely represents growing pains. There's a line of thought that says an artist's true mettle is revealed on their second album. A songwriter has his or her whole life to write a first album, and 6 months to write a second. The logic goes that if there's true songwriting talent in the artist, the second record will be better, not worse.

XTC is an exception to that all around. Their first album, White Music, had its moments but was nothing spectacular. Go 2 was more of the same. The band's true evolution came once manic keyboardist Barry Andrews left the band and was replaced by gifted guitarist Dave Gregory. They subsequently blossomed into one of the most lyrically intriguing and melodically rewarding bands to come out of the New Wave movement.

That leaves Go 2 as little more than a prologue, a preview, a warm-up act. By all accounts (most of them in Neville Farmer's XTC: Song Stories) the recording of the album was difficult. The rest of the band had no love lost on Barry Andrews, leading to lots of arguments. Additionally, songwriters Andy Partridge and Colin Moulding were still learning their craft. Go 2 is the sound of a band in an early chrysalis stage, still mostly what they were but with hints of what they would become.

Opener Meccanik Dancing (Oh We Go!) is one of the best songs on the album. It's all about the going out to a club and dancing. Over a strong rhythm and melodic baseline Partridge barks: "Alcohol is an easy key / It helps you unwind / And dance with me!" The melody on the pre-chorus ("Can't wait until the weekend comes / I wanna be with all my chums") presages the band's tuneful future. Moulding's The Rhythm is in a similar lyrical vein. It's catchy but unsubstantial, only made interesting by Andrews' very un-punk piano flourishes.

At the least, one can say that Moulding, the band's soft-spoken bassist, was making progress in his songwriting. While his White Music contributions were forgettable and/or annoying, his songs on Go 2 are at least servicable, but his themes are extremely limited. Basically all of his songs are about being in a band, be it life on tour (Buzzcity Talking) or playing to an unpredictable crowd (Crowded Room and I Am the Audience). I Am the Audience provides some intriguing snatches of melody and inventive production from John Leckie, again showing the path to the band's future.

Go 2 also sports some unexpected ska-influenced tracks. First is the chaotic Red, which shows that even when going off the rails, the band can't help but be a little bit pretty. The other is the irrevrant Jumping in Gomorrah, in which Partridge exclaims, "I'm religion-free!" Dear God would come along 7 years later.

Barry Andrews' two songwriting contributions, while maybe not the worst songs on the album, are definitely the most out-of-place. My Weapon sports purposefully misogynistic and crude lyrics, but is musically varied, sounding like corporate rock on the verses, with a little bit of disco thrown in for good measure. Supertuff is a slow, contemplative ode to thuggery. Out of the context of the album, no one would identify it as an XTC song.

The album's remaining songs are surprisingly experimental for a band just starting out. Beatown, Life is Good in the Greenhouse, and Battery Brides (Andy Paints Brian) are all interesting in theory more than practice, but they do show that Partridge's imagination stretched far and wide, both musically and thematically. The best song of the album was not really on it until CDs came along. Are You Receiving Me is an energetic blast of New Wave attitude. It's a paranoid plea from a man who suspects his girl is cheating, and one of XTC's greatest early singles.

Partridge's teenage photo comparison is very apt. Everyone goes through their awkward years. These years are often full of strange excitement and experimentation, with sporadic flashes of the future. It's easy to be embarrassed about these times, but hard to disown them, because they were so necessary. Go 2 is a lot like that.

astroblogy said…
I LOVE Go 2. The first album was promising, but compromised by songs like X Wires (fun, but not an album-masterpiece), This Is Pop? (c'mon, I don't know why critics rate this, it's just a stammer and then a shouted chorus) and the Dylan cover. Go 2 is my favourite of the first 3 albums as an album, even though there are some better songs on the first album and the third.
I love your reviews, BTW.
8:50 AM