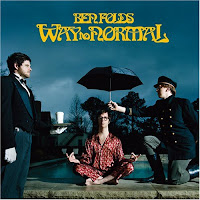 All hail the King of the Break-Up Song.

Many have vied for the throne, but all are pretenders when compared to Ben Folds. On his 1995 debut, Alice Childress and The Last Polka worked their regretful way into our hearts. 1996's Whatever and Ever Amen stepped it up a notch, with Fair, Selfless, Cold, and Composed, Smoke, Evaporated, and Song for the Dumped each addressing broken relationships in their own unique ways. 1999's The Unauthorized Biography of Reinhold Messner gave us the grandeur of Mess and Don't Change Your Plans. Folds only gave us Gone on his first solo effort, Rockin' the Suburbs, instead focusing on character pieces and love songs. He came back with a vengeance on 2005's Songs for Silverman: Landed, Give Judy My Notice, Trusted, You To Thank, and Time all explored the fineries of romantic failure.

Anyone can write a lot of songs on the same subject, but Folds' genius is a gift for devastating detail that makes you feel like he has lived every moment. (And maybe he has; he's currently on his fourth marriage.)

Way to Normal continues the trend, with no less than 4 new additions to the Ben Folds Break-Up Canon. But something is slightly different here. With the exception of the hilariously bitter Song for the Dumped, the tone of the above-mentioned tunes is resigned and/or sad. On the new album the dominant emotion is anger.

The musically buoyant You Don't Know Me sounds cheery enough, especially with the irrepressible Regnia Spektor on co-vocal duties. But the lyrics are cutting: "If I'm the person that you think I am / Clueless chump that you think I am / So easily led astray / An errant dog who occasionally strays and needs a shorter leash, then / Why the fuck would you want me back?" He picks up on that particular lyrical strand on Errant Dog, expanding it into an entire song. It's a confusing tune until you realize he's writing from the perspective of a woman who is comparing her cheating man to a runaway dog. Lest you think this is a sensitive move by Folds, it's really just another way to portray his ex as heartless: "I know I said dead or alive / But really dead is fine."

Bitch Went Nuts is the harshest of the lot. Folds described the title in a recent interview, saying that when a break-up occurs, women will give you a variety of complex reasons for it. Men, on the other hand, usually boil it down to those three words. The song itself is boppy, but the lyrics are dark. He admits fault ("I made my bed / I lie in it") but is dismayed by how his ex has spread her newfound animosity among so many other women in his life ("They're at my door with torches").

Interestingly, there's a completely different song of the same name, Bitch Went Nutz, which serves as a bonus track on the iTunes version, and can currently be heard on his MySpace page (www.myspace.com/benfolds). It's one of 6 "fake" analogue versions of songs from the album that were leaked early, and it's even better. While not strictly a break-up song, the couple in it don't seem long for the world. The conservative narrator is livid that his liberal girlfriend did a line of cocaine at his office Christmas party and then proceeded to, among many other things, yell "Fuck Dick Cheney!" The song is hilarous, whether you bleed red or blue.

Cologne is more of a "typical" Folds break-up song, with a balladic pace, strings, and a "what just happened?" air. The title refers not to the fragrance but the German city, apparently the place where things became final. The narrator's wonders about his ex's thoughts on Lisa Nowak, the astronaut who drove from Texas to Florida in diapers to confront a colleague's girlfriend. Bizarre as it is, his musing perfectly illustrates his sense of loss.

Two other songs address relationship drama more peripherally. Kylie From Connecticut is a tearjerker about an older woman who suspects her husband of cheating, leading her to guilty/longing remembrances of her own affair years ago. Brainwascht is not about the break-up itself, but an intriguing side plot. It's a scathing diatribe against a former friend who apparently wrote a "bad country" song about Folds after his latest divorce, taking the ex-wife's side. Remind me not to piss Folds off, but it does provide some of the record's best lyrics: "Isn't there something in the Bible about forgiveness and love / And more importantly about throwing stones and what your house is made of / You might reflect upon your own arrangement / In '94 getting blown in your basement (While your wife slept!)"

As a whole these songs provide a gripping narrative of a relationship gone very sour.

The rest of the album is not so cohesive. In reviewing 2005's excellent Songs For Silverman, I pointed out that Ben Folds' music always straddles the line between the silly and the sublime. Some of the tunes on Way to Normal cross the line. Songs like Dr.Yang, The Frown Song, and Free Coffee, while all melodically solid, are aimed at easy targets (mainly the rich and uppity) and ultimately feel empty.

Others fare better. Opener Hiroshima (B-B-B-Benny Hit His Head) cleverly recalls the old Elton John hit, with a percussive piano and fake live audience and tells a true story about Ben's tumble off the stage while performing in the titular city. In Effington Folds namechecks my hometown of Normal, Illinois while pining for a simple life in a small city and providing the title for the album. I can assure him, people aren't normal in Normal either, but he probably already knows that. Musically, the song is very reminiscent of the The Unauthorized Biography of Reinhold Messner era, which is a very good thing.

And while Way to Normal can't approach the the entire album listenability of that 1999 masterpiece, it's still another fine entry in the catalog of pop music royalty.

CTV said…
A perceptive review, and excellent point about the rather vacuous songs on this set (Free Coffee, Frown).

It seems to me that Folds took the critics' misjudged dismissal of Silverman -- it's not Ben Folds Five, they cried -- to heart and tried to receate his old sound. A pity.

I do disagree with your view of Suburbs though. It's a fine album indeed.
3:36 PM

I think you're right about the reaction to Silverman getting in his head a bit.

And I didn't intend to disparage Rockin' The Suburbs, only to point out that it's short on break-up songs. I love that album.
1:34 PM

CTV said…
Oh, sorry about misreading you on Suburbs. Gone is one of the great break-up songs.

I don't follow Ben's divorces much, but am I right when I understand the break-up songs on Normal asreferring to the woman he addressed in The Luckiest?

Anyway, great blog. I really enjoy your insights. So much that I usually feel I have nothing constructive to add.
3:22 PM