October 05, 2008
The one constant in every established artist's oeuvre is the bad album, the one that's reviled by both fans and critics. Those unlovable albums are the ones this feature, Rock Bottom, is concerned with.

Here's how it works: I've consulted three sources, the AllMusic Guide and Rolling Stone (for the critical point-of-view) and Amazon.com (for the fan perspective*). The album with the lowest combined rating from both sources is the one I'll consider the worst. I may not always agree with the choice, and my reviews will reflect that. I'll also offer a considered alternative. Finally, there are some limits. The following types of albums don't count: 1) b-sides or remix compilations, 2) live albums, 3) albums recorded when the band was missing a vital member, and 4) forays into a different genres (i.e. classical).

* * *
Maybe this is where my methodology fails me. I love James Taylor a little more than the next guy, but even I was shocked at what my research turned up. Basically, there is no bad James Taylor album. And if you are in disbelief, consider this: In 40 years of recording, the man has only released 16 albums. Elton John has been recording a comparable amount of time, and he put out album number 16 in 1981. He's at 30 now. Besides proving that Taylor is definitely not prolific, it's also evidence of strict quality control.

As it is, only two of his albums can reasonably contend for the title of "worst." The AllMusic Guide gives 1972's One Man Dog and 1974's Walking Man each 2 1/2 stars. Amazon.com reviewers were hesitant to disparage either, feeling mostly adoration for the former, and directing some gentle letdowns toward Walking Man ("mixed bag" and "good not great" are as bad as it gets). That, added to the fact that it remains his poorest selling album, lead it to get the nod as "worst." 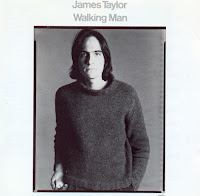 I can see why. Don't get me wrong; Walking Man is far from a bad album. In fact, it received a rapturously wordy review from Rolling Stone. AllMusic Guide's William Ruhlmann was not so kind, writing that the record "sounded like the statement of a songwriter who either had nothing to say or didn't know how to say it." While I don't agree with the first part of that assessment, the second part is right on. Walking Man's problem is not one of substance, but of style.

Some artists are eclectic and experimental by nature. James Taylor is not one of those artists. Over half of Walking Man features the warm, mannered types of songs you expect. Some of them are pretty great. The title track, of course is a classic. It's an earthy, enveloping song about the titular character, a man with no true place. Rather than painting the walking man as spiritually beyond the rest of us, Taylor makes it clear that he has no true direction or destination. It's a song about being lost.

Other traditional Taylor tunes include the folk-pop Let It All Fall Down (featuring background vocalists Carly Simon and Paul and Linda McCartney), the hoedown Me and My Guitar, and the catchy Ain't No Song.

I'm not a person who blames production for the problems of an album or song. I'm too much of a pragmatist. But as I wrote in the Bowie entry, production is only a problem when it mars a good song. That's what happens here, on two songs. Hello Old Friend, about returning home from tour, sports a great melody and above-average lyrics. Unfortunately, the presentation makes it sound like a Bette Midler or Barbara Streisand showstopper. That's simply not Taylor's strength.

Similarly, Migration has a good melody, a great vocal, and mysterious lyrics. But once again, the arrangement is misguided, sounding a little bit Pink Floyd, a little bit Spinal Tap's Stonehenge. The song makes needless use of a Vox Humana, a ghostly pipe organ sound.

Those two added to a lifeless take on Chuck Berry's The Promised Land help to sink side two of the album. Thankfully, things come around at the end with the closer, Fading Away. Serving as an informal bookend to Walking Man, the two songs could conceivably be about the same character: "You can strike up the band without me / You can have your doubts about me / But I'm just fading away" Taylor sings. They aren't the words of someone who's got it all figured out.

Taylor himself wasn't quite as lost as the characters he wrote about, but Walking Man was obviously a searching sort of album. And ultimately, James found what he was looking for. He learned his lesson, and never again strayed too far from his signature sound.

Sometimes you have to leave home to truly appreciate it.

Bill said…
Walking Man features one of the lamest Chuck Berry covers of all time-- and to make matters worse, it is of one of Berry's best numbers. James Taylor's work is not without its pleasures, but he should never be permitted to attempt material written by African-Americans.
7:18 PM

Paul V. Allen said…
I completely agree about the Chuck Berry cover. Anyway, Elvis did the definitive cover version of that song.
9:31 AM