October 29, 2008
The one constant in every established artist's oeuvre is the bad album, the one that's reviled by both fans and critics. Those unlovable albums are the ones this feature, Rock Bottom, is concerned with. 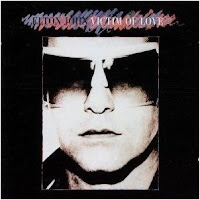 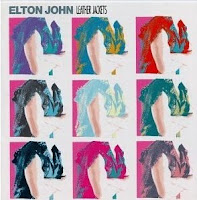 Sir Reginald Dwight is so prolific, he doesn't have just one worst album, he has two! In every statistical category (basically AllMusic and Amazon.com ratings) 1979's disco experiment Victim of Love and 1986's Leather Jackets are tied. I thought listening to them would clarify things, but it really didn't. So my only option is to break it down, borrowing a page from Bill Simmons (who in turn is borrowing a page from Dr.Jack Ramsey). The idea is to create "bad album" component categories, grant an edge (which is actually bad in this case) to one of the albums in each category, and see who comes out on top (or bottom, as it were).

So, let's break this baby down Dr.Jack style:

AllMusic Guide's Lindsay Planer labels Victim of Love a "dismissable platter," while Rolling Stone's Stephen Holden adds "the album is empty of ideas." He also calls it "anonymous" and "derivative."

Planer breaks out the hyphens for her Leather Jackets review, calling it out "less-than-inspired" and "half-hearted."

Amazon.com fans were full of bon mots about Victim of Love. David Insignia says, with the kind curious grammar that only Amazon reviewers can muster, "if Elton John wanted to piss off any of his beloved fans this album could do it." The single-monikered Hapworth states: "The only reason to own this terrible disc is if you wish to experience, first-hand, what it must feel like to be trapped in Hell." Nevin tells us that "what makes Elton John's Victim of Love so, well, horrible, isn't just that the music is atrocious (which it is) but that it was so desperate." But maybe the worst that can be said of a disco album by a gay artist is as follows: "This album does not even work as kitsch or camp." However, Gary Gardner informs us that Victim of Love is "not Elton's worst album (Leather Jackets still takes the prize), but comes close."

So what about Leather Jackets? Hapworth gives this advice, "Stay Away!" He also calls it a "stinker." D.R.Hayes points out that "there is no traditional piano on this as it sounds like all keyboards and machines. It really zapped out the beauty of what these songs could've been." S.J. Buck backs that up: "There are some good songs buried behind the monstrous production."

Well, despite Gardner's assertion, at least Leather Jackets gets some qualified praise.

Vicitim of Love, as I mentioned, is Elton's disco album. What I didn't mention is that Pete Bellotte, a producer/writer most famous for his work with Donna Summer created and wrote the album. Elton is little more than a voice (though I can't believe he didn't contribute slightly to the melodies). So if the album is bad, is it really Elton's fault? It does have his vocals, and his name is on the cover, but I have to absolve him somewhat.

Leather Jackets, on the other hand, has little excuse. Granted, the album was comprised mostly of outtakes from 1985's Ice On Fire, and was released to fulfill a contract with Geffen Records. However, Elton has his classic '70s band almost fully in tow, along with producer Gus Dudgeon. Elton and faithful lyricist Bernie Taupin wrote all the songs. So if the album is bad, it is definitely Elton's fault.

What I mean by this category is basically this: Does the production distract from otherwise good songs?

In the case of Victim of Love, no. If I were making a film noir, I'd have to have a central mystery, murder, a femme fatale, and a strong light/dark contrast in the cinematography, right? Those are the rules of the genre. This is a disco album, so the songs use the production techniques that these types of songs call for. Yes it's dated, but it's also appropriate, thus this album is exempt from this criticism.

Leather Jackets is also a product of its time, namely the '80s. This means that many of the songs feature "synth programming" on the credits and lack bass and real drums. As hinted at by some of the Amazon.com reviewers, this causes one to expect that the songs would sound much better when stripped of the of-the-moment production choices.

Did you ever wonder what it would sound like if Elton covered Johnny B. Goode, disco style? You don't have to; it's the opening song on Victim of Love. Elton's version is actually fairly faithful to the original, if the original had the sax from the Cosby Show theme, a slap bass solo, and was about three times longer. It's definitely crappy. I don't think the other 6 songs can quite be defined that way. They have pretty good verses, but unimaginative choruses (usually the title phrase shouted by Elton and a trio of backup singers).

Leather Jackets has twice the number of sucky songs: Go It Alone opens like incidental music from Miami Vice before it begins to "rock" and Memory of Love features a weird voice emulator (kind of like Steve Winwood) and is slightly countrish and unintentionally depressing.

Pop music needs to be catchy. Victim of Love suffers on that point, with none of the songs sticking in my craw.

On the other hand, Leather Jackets has at least three songs that I found myself singing after the record was over: Hoop of Fire (a more classic-sounding, Beach Boyish tune) and Don't Trust That Woman (Elton emulates Billy Ocean, with writing help from Cher). Gypsy Heart also rattled around a little bit.

Elton John is gay. I don't want to hear him pretend not to be, even if a straight man does write his lyrics.

Victim of Love only has one incident, Warm Love in a Cold World. It's a love song featuring the repeated line: "girl we gotta make it."

Angeline, with two members of Queen playing along, is Leather Jackets' most egregious offender. "Talk real dirty and I'll make you scream Angeline," Elton offers. Heartache All Over the World has a chorus that goes "girls! girls! girls!", bringing to mind the far superior Island Girl. Elton got married to a woman in 1984, so this is definitely a product of its time.

Greg Brady, Amazon.com reviewer, had this to say about the Victim of Love cover: "The album cover says it all...Elton closing his eyes to what he's created, hoping if he looks away it will cease to exist."

That considered, it's still a much better cover than the one Leather Jackets sports. And if you add the fact that the back cover has a truly laughable portrait of Elton and the band dressed up in, you guessed it, leather, then you have a truly terrible package. Remember, he was pretending to be straight here.

Admission: If you told me I could only own one Elton John album and these two were my only choices, I'd pick Leather Jackets. That means it can't be the worst right? Well, in this case I am done in by my own system. The categories don't lie. By a score of 6 to 3 Leather Jackets is Elton John's rock bottom.


Author's Note 1: UPDATE: In the January 2011 issue of Rolling Stone, Elton calls 1997's The Big Picture his worst. "That was just making a record to make a record," he says. In my opinion, that album is not great, but neither is it terrible. Elton is probably not the best judge of his own work.