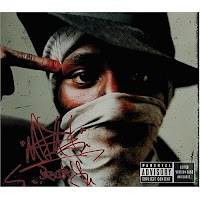 Sometimes (more often than I'd like, actually) I walk out of the record store with something I never expected to purchase. Such was the case a month or so ago when I went into the Electric Fetus and walked out with Mos Def's latest effort The New Danger.

A couple of nights before I'd seen Mos Def perform his new song Close Edge on the Chapelle Show. His performance was simple but unconventional. As Dave drove, Mos sat in the passenger seat and rapped, seeming for all the world like he was making it up on the spot. I was mesmerized.

Even so, I hadn't even thought about seeking out the album until someone came into the Fetus and asked about it. Anyone publicly expressing interest in an artist is always fascinating to me, and I eavesdropped as I heard the clerk say, "Yeah, you want to listen to it first? It's pretty weird." And that sold me.

The rap-rock tracks, recorded with the band Black Jack Johnson are likely to be the biggest head-scratchers to hip-hop fans who seek this out. I think they're stand-outs though, and the band recalls Rage Against The Machine, but with a better rapper/vocalist. But I must admit, hearing Mos repeatedly call out to "Jack Johnson!" brings up unpleasant images of laconic acoustic guitar players.

The raps are the best part of the album, of course. Sunshine comes in at track #9 and is the disc's first transcendent moment. Using a Hair sample, Mos claims he's "the shot clock / way above the game" and that his "style's fresh / Like I'm a day old." It's hard to argue when he flows...not angry but intense, not your typical money - guns - girls rapper but still hip-hop, a movie star but still completely authentic. Close Edge's dizzying chorus "Don't touch me 'cause I'm close to the steets, to the beats, the bitches, the niggas, the women, the children, the workers, the killers, the addicts, the dealers, the quiet, the livest, the realest...I'm like J.Brown gettin' involved" speaks for itself.

Modern Marvel is perhaps the most interesting song. It's an epic tribute to Marvin Gaye that uses a subtle-to-obvious What's Going On sample. Mos breaks off a rap that wonders how Marvin would react to our modern world, when socially-conscious masterpieces like Mercy Mercy Me, Inner City Blues, and What's Going On spoke of the exact same problems in 1971. It's an unconventional, if sobering and effective, way to put things in perspective.

At 75 minutes, I could trot out the old rap album complaint: "It's too long and overindulgent; why couldn't he have done a bit more self-editing?" That's valid, but two things set this record apart from the other albums that have to suffer this criticism. One is that Mos Def is just so damn cool (think about it... he's got a rap career, AND he's been in movies with Robert DeNiro, Eddie Murphy, Marky Mark, Ed Norton, Halle Berry, and Billy Bob Thornton and, yes, Kevin Bacon...not even Ice Cube has worked with that caliber of talent), and the stylistic changes are at least daring and different. We don't have the usual 2/4 of monotonous filler and skits that sink so many rap albums.

Is it going to be a classic? Probably not. But for a unexpected purchase, it ain't bad.

tom said…
ohh goodness, I've once had that experience, purchased something which never been expected before. but it became bad luck to me because it did not satisfy me. I was disappointed and regret purchased that thing. now I have to make sure that I really like or know it before I decide to purchase.
9:09 PM

Zane said…
I'm sure that everyone has experienced anything like that before, especially if you are one of those people who like to go shopping around. Maybe there will be good and bad thing. It's all up to you...!
3:59 AM

I agree with @Tom that he said: "now I have to make sure that I really like or know it before I decide to purchase."

It is better to choose a proper thing for ourselves than get unexpected purchase.
10:20 PM

Anthony said…
Yeah, that’s right! I often buy things that I do not need and the results, I'm just wasting my money for stuff that I do not use until now. But from this mistake now I am more thinking of buying before I buy it. Thanks for sharing this information.
11:22 PM