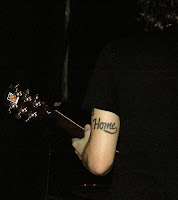 When it comes to feeling settled, we all have a certain temperament. For many people, it can change depending on the situation, but you always hold a basic idea of what's most comfortable. As I face holiday travel tomorrow I'm reminded again how much I just like to stay home.

But I've already written about that (Jellyfish, I Wanna Stay Home). And though that's a part of Mayer's song, it's not the whole story.

The real story is the search for romantic satisfaction. God, how many songs have been written about it? I'm guessing that an objective overview of the history of pop music would prove that more songs have been written about the negative side of love than the positive side. As the Carpenters sang "the best love songs were written with a broken heart."

Mayer doesn't appear to have a broken heart in this song, though he's definitely resolute that he doesn't want one. "I refuse to believe," he sings, "that my life's gonna be / just some string of incompletes / never to lead me to anything remotely close to a home life." It's a statement of strength that also acknowledges failure. That's very comforting to me right now.

The song goes on to pine for a "normal" life. Mayer puts it like this in the chorus: "I want to live in the center of a circle / I want to live on the side of a square." I assume the circle is a family circle, and the square is a house. You know, the things that most of us middle class kids were brought up to expect from our life. And now, so many of us are frustrated to find it's not as easy to achieve as we'd been led to believe.

The song doesn't offer much in the way philosophy or advice. It's merely a statement of purpose. But such an un-rockstarish sentiment is what endears me to John Mayer while so many others flee from him. In fact, there's even some self-deprecation when he acknowledges that his professional accomplishments are nothing compared to the prospect of creating a happy life: "I will go to my grave / With the life that I gave / Not just some melody line / On a radio wave."

I used to think that if I was completely happy professionally, I wouldn't mind if that middle class ideal life never happened, but now I know just it isn't true. Thanks a lot, Mayer.

Album: Heavier Things (2003)
Fave moment: The bridge, when he vows, "I can tell you this much / I will marry just once / and if it doesn't work out / give her half of my stuff / It's fine with me / We said eternity." It may be a little naive, but you gotta admire the intention.