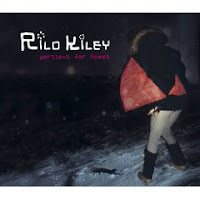 Ah, a great opening line can be a work of art, and Jenny Lewis, Rilo Kiley's singer, obviously recognizes this. Portions For Foxes begins thusly: "There's blood in my mouth 'cause I've been biting my tongue all week."

That kicks off a catchy, guitar-driven, too-realistic rumination on romance. This isn't the typical a boy-broke-my-heart story, but instead a complex confession from a girl who knows she's just using someone to satisfy her earthly desires, and has no lasting romantic interest. She hates to do it, but she has little self control because "the talking leads to touching and the touching leads to sex." Immediately this leads to regret because "then there is no mystery left." Ouch.

The chorus, then as if we didn't know, Lewis tells us in the chorus: "And it's bad news / Baby I'm bad news."

Bad girl songs are nothing new. Fiona Apple's Criminal is probably the torchbearer. Songs like that are perfect for sensitive boys who fear they're always destined to get their hearts broken. To hear a girl admit fault is comforting.

But Lewis won't let them off the hook that easy. In the song's last verse she turns the tables and imagines how the guy might feel: "There's a pretty girl in front of you / yeah she's real pretty and she's real into you." Turns out that girl is her and she realizes (or hopes?) the guy is just as detached as she is. This makes the song infinitely more interesting, because suddenly we're wondering if she's really a bad girl, or if she just wishes she was.

In fact, the end may be a clue. Though her friends are all telling her to get out of the relationship she decides: "I don't care, I like you."

Anybody with recent experience / observation of modern romance will not be shocked by this sort of scenario but the fact that there's a song about it is pretty damn cool.

As for the title, it IS a line in the song, but that's the only cryptic thing about the whole affair. Lewis sings, "we'll all be portions for foxes." My guess is that it refers to the fact that foxes are smart animals who get the meat they want with little concern for the consequences.

Album: More Adventurous (2004)
Fave Moment: After the line "I know I'm alone if I'm with or without you" the guitar does an subtle imitiation of the Edge's riff from that song.

Anonymous said…
Interesting take on this song. I've been wondering what "P4F" might mean and your interpretation makes a lot of sense.

Allen Lulu said…
I couldn't love this song more. I didn't catch the u2 reference until you pointed it out. Silly me I just thought then title was a nihilistic outlook along the lines of Belly's Feed The Tree. The "Walking corpse" line led me down that path and I still don't know if I am wrong. It's unlike a lot of Rilo Kiley's stuff but it's powerful.
But I think you have the last verse wrong. I think she explains that by the line "I don't blame you, I'd do the same thing, I get lonely too.". Clearly he's moved on and she can't get past her desire for him.
Still and all, thanks for calling attention to such a great tune.