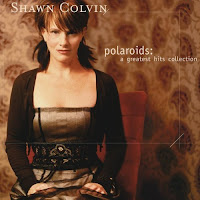 Shawn Colvin is easy to dismiss. The fluke Lilith Fair success of 1996's Sunny Came Home has given her the aura of a mainstream artist, which in truth she really isn't. She's a wordy, guitar-playing folkie who looks like a prettier version of my college American Romanticism professor. There's a whole sub-genre of artists like this, people like Lucy Kaplansky, Claudia Schmidt, Carrie Newcomer. Who? Exactly. These are artists with a small devoted following, who sell enough records to make a living but will never enter the collective consciousness.

Sunny Came Home falls right about at the two-thirds mark of Colvin's newly released Polaroids: A Greatest Hits Collection and some might be surprised to find that it's not a stand-out track. It's simply another in a flow of great songs, not the song you wait through the others to hear.

Just for that simple fact, Polaroids should set the record straight on Colvin, for those who stumble across it. For me, it cements a radical re-thinking that began in August when I saw her perform at the Great Minnesota Get-Together (otherwise known as the State Fair). It was a clear, temperate summer evening, and Colvin came on as the sun set, just her, a mike, and a guitar. A true folkie. And she nailed the performance. She ran through her ouvre, including most of the songs on this collection, and the crowd was mesmerized. It was by far the best-behaved crowd I've seen at a Minnesota concert. My experience of Minnesota concert crowds has proven to be a strange combination of enthusiasm-free politeness and "let's have a loud conversation right now" rudeness. This crowd was neither. They were deathly quiet during the songs, and generously praiseful after each one.

The fact that Colvin could perform so minimally is testament to the strength of the songs and her talent as a performer. Indeed, my clearest memory of the show (beyond a rare sense of complete well-being) was her cover of Talking Heads' This Must Be The Place (Naive Melody). Though Talking Heads are one of my very favorite bands and this is one of my very favorite songs by them, it took me nearly half the song to place it. Like the best cover versions, it made me hear something old in a new way. In this case, it was the beauty and humanity of the lyrics, something David Byrne's voice, God bless it, could never put across.

That cover is included here in a live version and I'm happy to have it. Other standouts include the opener Steady On, the irresistable Round Of Blues, and the glossy late period Whole New You. Steady On was from her first album, Whole New You from her last, and there's not a beat skipped between them. An artist whose first hit can be as consistent as her last shouldn't be dismissed lightly.

Grade: A-
Fave Song: This Must Be The Place (Naive Melody)