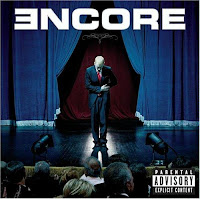 What does a person expect when he or she buys an Eminem album? I think the answer to that has changed since 2001's The Eminem Show. After that album's ubiquitous success and then the even more ubiquitous success of 8 Mile and its accompanying theme Lose Yourself it was okay for your mom to sing an Eminem song. In a couple of fell strokes, Eminem went from a reviled fringe figure to someone who was widely embraced by the mainstream. In other words, he earned artistic capital. Now how has he spent it?

Well, if you judge from the first five songs on Encore. Evil Deeds is his typical family issues song, a sort of Cleaning Out My Closet sequel. Sign of maturity? Em says he's thankful for his talent. Never Enough features the ever-reliable Nate Dogg and a uncharacteristically tight verse from 50 Cent. Yellow Brick Road details Em's past and focuses specifically on the recently-discovered tape wherein he used the n-word. And get this: He actually apologizes! Like Toy Soldiers rescues Martika's Toy Soldiers from obscurity for the chorus and addresses the repercussions of the beefs that rappers engage in. Again, Em's tone seems conciliatory. Finally, Mosh is a strident call to action that expresses some strong feelings toward Mr.Bush and his policies. It's a great track and don't think it's not still important now that the election is over. I hope tons of young people are out there listening to and internalizing it.

But just when you're getting comfortable, the old Eminem shows up. Puke is the first skip-worthy song of many on the latter three-fourths of the album. Dedicated to his ex-wife Kim, the song details why she elicits the title reaction. As much as in interviews he speaks of wanting his daughter to have a positive impression of her mother, he doesn't really seem too intent on it. And though the song is not my thing, I can't hate too much, because he's not falling out of character, only reverting to a former one. The same can't be said for several songs that follow.

Instead of being juvenile and offensive, several of the next few songs are just plain inconsequential. My 1st Single is a messy word spill highlighted by repeating burps and farts. Big Weenie, Ass Like That, and Spend Some Time can all fall under my worst category for a song: Boring. Rain Man, a funny stream of consciousness that features Em parroting the titular figure, is an exception, but it also accidentally reveals his the strategy for the aforementioned songs when Em says: "I just did a whole song and I didn't say shit." The Eminem Show was a flawed affair, but managed to always be gripping even when it was cringe-worthy. We expected to be shocked and offended, but not bored or baffled.

One Shot 2 Shot is also completely useless. It's the obligatory D12 song and if you're wondering why he included it when a whole D12 album came out just 7 months ago, think about royalties. When Encore sells a ton of copies, those D12 can finally get enough money to feed their families (just like Latrell Sprewell).

But not all hope is lost for the album; there are a couple of gems in the rough. Mockingbird is dedicated-to-Hallie song, and while writing a song to your daughter is generally a horrible idea, this one actually works, thanks to a refusal to sentimentalize. Crazy In Love samples Heart to good effect and is a more fitting explanation of his feelings toward his ex-wife than Puke. And Just Lose It is the My Name Is, The Real Slim Shady, Without Me of the album, the insanely catchy, insanely funny single. I have it on repeat. Favorite part besides the Pee-Wee Herman laugh? "Yeah boy shake that ass / oops I mean girl, girl, girl, girl / You know you're my world."

Final verdict? I resisted liking Eminem for so long, then finally gave in and now I don't feel rewarded for that choice. I feel like that artistic capital has been misspent. Given Em's immense verbal talent and the strength of 8 of these songs this album could have been so much better. Actually, I wonder if contentment just doesn't sit right with him. Perhaps the critical lambasting he gets for this album will give him enough material and vitriol to blow us away on the next one.