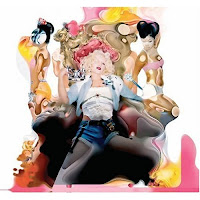 Here's why I love Gwen Stefani: It's not because she's sexy, cute and stylish (though that doesn't hurt), it's because she's so goofy and neurotic. Her lyrics have always been as transparent as a freshly-washed window. There has never seemed to be a filter or front between her thoughts and her words. Through her songs we've been made a party to her hopes, dreams, confessions and fears. No Doubt's first huge hit, Don't Speak, was cool because it was written about how pissed she was at the band's bassist. Return Of Saturn was full of songs about her desires to have a functional relationship and get married and have a baby. Even the party record Rock Steady was full of specific personal statements like Making Out and Underneath It All.

Usually when an artist goes solo, she uses the occasion to get personal, to write about things she couldn't in the confines of the band. I guess Gwen felt she had no choice but to go the opposite direction. In recent interviews she has made it clear that she wanted to make a dance record, and wasn't concerned with baring her soul. She definitely succeeded in that, in part because she continues her band's penchant for switching musical styles like Mr.Rogers switched shoes. The album makes use of multiple producers, including several top hip-hop hitmakers. As a result, the sound veers from disco to R & B to '80s pop to movie musical.

The throbbing What You Waiting For starts things off comfortingly. Here's Gwen writing a song about why she decided to do a solo album, which is so typical of her. But the program gets fuzzier from there. Faux-hip-hop songs like Rich Girl (produced by Dr.Dre), Harajuku Girls (produced by Jimmy Jam and Terry Lewis), and Hollaback Girl (produced by the Neptunes) are essentially throwaways. They're catchy, inconsequential and hard-to-hate, especially the latter when Gwen says "Repeat after me / this shit is bananas / b-a-n-a-n-a-s."

Still, hearing an artist I'm so used to wearing hear heart on her sleeve be so material and mindless is slightly troublesome. It puts a little too much guilt into the pleasure.

It doesn't help that those tracks are all in close proximity to Cool, the best song on the album. A decidedly '80s synth ballad it features Gwen singing about Tony Kanal (the aformentioned No Doubt bassist) and how their friendship has settled into a comfortable place after several obstacles. It's a specific story matched to perfect music and exactly what I love about Gwen.

Speaking of Kanal and the '80s, he produces the album's second best song, Serious. Taking the lead from synth pop gods like Depeche Mode and O.M.D. it really sounds like a lost '80s hit. The best part? Gwen's voice going all Oingo Boingo on the title word in the chorus. Kylie Minogue would kill to have done this track...

The Real Thing also fares well, though it features a generic lyric. But who needs perfect lyrics when you have two members of New Order playing with Wendy and Lisa?! Now that Gwen has worked with Prince, Wendy, and Lisa, I fully expect Apollonia and Morris Day appearances on the next No Doubt album.

Elsewhere there are two collaborations with Andre 3000 from Outkast. Bubble Pop Electric is clearly inspired by Grease, as Gwen and Andre take on the roles of teenage lovers heading out on a date. It's musically-complex and melodically-pleasing addition to that time-honored tradition of songs about sex in cars. See the Misc. Lists section for more details. The other Andre 3000 track, Long Way To Go is a Prince-ly rumination on jungle love, but essentially reduces Gwen to a guest on her own album. It shouldn't have been included.

As of now, I'm really looking forward to the next No Doubt record. Love Angel Music Baby, though full of worthwhile moments, is sort of like a vacation. It was nice enough while you were there, but the biggest benefit was that it made you appreciate home more. Hearing Gwen put on a front makes me appreciate her transparency that much more.