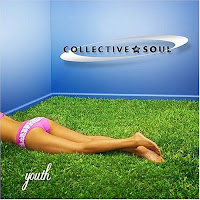 What if Collective Soul singer Ed Roland had a nasal, whiny voice instead of a booming baritone? Besides making his long hair seem silly, it would turn Collective Soul into a top-notch power pop unit. Afterall, their songwriting almost exclusively focuses on the high H's of power pop: Hooks and Harmony. Fortunately for them, Roland's manly voice has allowed them to masquarade as a hard rock band.

Forget that. Youth, their sixth album (and first since 2000), is pure pop. It begins with Better Now, as an effective "we're back" song as you could ask for. Roland tells us he's "newly calibrated" and "happy as Christmas" over a bed of praiseful vocals and saxophone (!). It sets the tone for an album that hasn't met a catchy chorus it didn't like.

Highlights include rockers Home, Feels Like (It Feels Alright), and Perfect To Stay. There are a couple of ballads, the best of which is the romantic Under Heaven's Skies. All are immaculately written, performed, and produced.

Herein lies the problem. Collective Soul is somewhat like a well-crafted dining room table. They are so well put together that you tend to take them for granted or not notice them at all. It doesn't help that Roland's lyrics are completely nondescript. There are no great lines or deep meanings. In fact, the vocals might as well be another perfectly tuned instrument in the mix. (This has been true for all of Collective Soul's albums except, oddly, for their third album, 1997's Disciplined Breakdown. That album had a very appealing spiritual focus.)

I guess that's why Collective Soul will never inspire great devotion in me. But I'll never miss one of their releases, either.