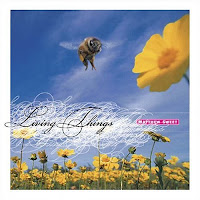 Matthew Sweet has worked with lots of notable people through out his career: Aimee Mann, Hanson, Mick Fleetwood, Pete Droge, Shawn Mullins, members of The Attractions, The Bangles, Big Star, The B-52's, R.E.M., Talking Heads, Television, and Voivoid, as well as session musicians who played with The Rolling Stones and Beach Boys.

On Living Things, he adds another name to that resume. Van Dyke Parks is an idiosyncratic musicial prodigy who has done critically acclaimed solo work, but is best known for working on the songs that were to make up Smile, the Beach Boys' never-released (at least until the end of this month) follow-up to Pet Sounds. Matthew appears to be doing whatever he can to become this generation's Brian Wilson.

What Parks apparently brought to the table was a diversity of instrumentation. The gripping opener The Big Cats Of Shambala (I looked it up...Shambala is a wild animal preserve located on the edge of the Mohave desert, not far from where Matthew makes his home, Los Angeles) makes prominent use of steel drums. Elsewhere there're accordian, theremin, mandolin, and clavoline, as well as more organ and piano than we've ever heard on a Sweet album.

That said, this record isn't anywhere near the Wilson / Spector wall-of-sound used on 1999's In Reverse. That is Matthew's most controlled and focused album to date. Living Things is the loosest and most carefree album in his ouvre. There are snippets of conversation here and there. The solos seem slightly off-kilter. Songs end as they see fit, sometimes going off into jams that don't quite know when to end. It's nice that Matthew isn't afraid here to let things get a bit out of hand (such as on the almost dissonant Dandelion), because we know he'll always pull in the reins when it's needed.

The combination of the diversity of sound along with the shambling attitude make it a bit of a jarring listen the first few times through. After that, the beauty of the songs begins to emerge.

One high point for me is the long-delayed appearance of Matthew's sense of humor. He's never been known as a funny or clever lyricist. At best you might have called a handful of his songs "wry." Cats vs. Dogs is thus easily the funniest and most whimsical song he's ever done. Over a piano bar melody, the verses examine the pluses and minuses of both types of creatures, while the chorus tells us: "you're going to have to decide which one are you in your heart." Compared to the generic sentiments of all of the songs on last year's Kimi Ga Suki* Raifu, it's a welcome change.

The CD was recorded two summers ago, probably after Kimi Ga Suki* Raifu but before The Thorns side project. It's a logical progression, a melding of the straight ahead rock of the former and the harmonic gentleness of the latter.

True to the album title, song names mention trees, seasons, dandelions, and sunlight. We hear the sounds of lions roaring and bees buzzing. There even seems to be a structure at work. The first half of the CD contains 6 songs, culminating in Cats vs. Dogs. The second half is solid, kicking off with the Altered Beast-recalling anger anthem I Saw Red and ending with four pretty songs, In My Time, Sunlight, Season Is Over, and the optimistic Tomorrow. All could have slotted easily onto In Reverse and they end the record on high note. I'm a sucker for that, since so many albums start off strong and fritter their energy and quality away as they go on.

Overall, if I were to put all of Matthew Sweet's albums into categories of Great, Good, Okay, and Pass, this one goes firmly in Good. And Sweet's Good is a few light years ahead of most artists' Great.

Rating: B+
Fave Song: The Big Cats Of Shambala

Paul V. Allen said…
Thanks to Richard for pointing out that Matthew has also worked with The Jayhawks (how could I forget a Minneapolis connection?) and Lindsey Buckingham.
6:53 PM