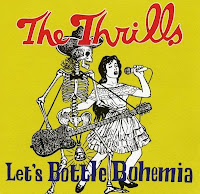 I would never begrudge another music listener their opinion, but some opinions fly so brazenly in the face of truth that one can't help but react negatively. Witness Jody Rosen's review of The Thrills' new album in the October 2004 issue of Blender. She (or he?) uses adjectives such as "overwrought," "strained" and "self-serious" to describe the effort. He (or she) seems to think that the band has become pretentious and full of itself. I don't know what album Jody Rosen listened to, but I just don't hear it.

Instead, I would use these words to describe the album: "loose," "effortless" and "charming." And clearly no band high on their own importance would name a song Whatever Happened To Corey Haim?, nor would they write a line like "I'm too vain for greatness." Maybe Jody Rosen has some secret grudge she (or he) is playing out in print, because the only whiff of pretense on this album is the brief orchestral reprise of Found My Rosebud that ends the affair.

The greatness of a song can be measured by the presence of at least one memorable moment. You know the moments I'm talking about...the ones that you point out to your friends, the instrumental touches or great lines that really stick out and make you want to listen again. Each of the ten songs on this album have at least one of those moments. From the way the melody downshifts unexpectedly on the word "night" in Saturday Night, to the sudden swell of synthesizers on The Curse Of Comfort, to great lines like "I guess everybody went to a better party" and "your frat boy past could be president."

Usually, the sophomore album tends to be a huge burden for a band. In fact, The Curse Of Comfort appears to be about that very problem...how it's hard to make relevant art when you are fat and happy and praised for your work. Their solution is to "hope love gets in the way." But scanning the lyrics, I think I may have discovered the source of Jody Rosen's anger: "the suburbs dream tonight of finding their muse / damn those rape victim writers and their five star reviews." Okay, that's a little harsh, but get over it!

At any rate, comfort obviously hasn't harmed them yet, and The Thrills have shambled right past the potential sophomore slump. And they did it quickly! It was just last November that I reviewed their first album. In that review I wondered if the band could forge their own identity outside of the California / Beach Boys / Neil Young thing. The answer is a resounding yes! In fact, I would go so far as to say that not since Weezer has there been a more promising debut /follow-up pairing.

So the fact that singer Conor Deasy claims they're just getting started ("Let's bottle bohemia / and start a career") might be a bit boastful. But bravado is definitely not the same thing as pretense, Jody Rosen!

Rating: B+
Fave Song: Not For All The Love In The World