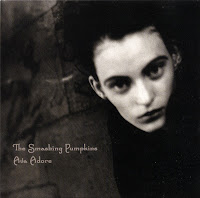 Here's a secret: Adore is an awesome album. Created in the wake of the massive success of Mellon Collie and the Infinite Sadness and the temporary firing of drummer Jimmy Chamberlain, it's the Pumpkins gloomy gothic eletronic Depeche Mode record.

Many say that the band went in this direction as a direct result of Chamberlain's abscence, but there's actually evidence that they were headed this way no matter what. The two soundtrack songs that directly preceded Adore, Eye and The End Is The Beginning Is The End, were completely different from anything the band had done before. It's as though Mellon Collie was the band's late '70s power rock album and these singles were their shot at early '80s new wave. The first time I heard Eye on the radio it was a thrilling moment to hear the band trying something so different.

Anyway, Ava Adore is the best song of this Pumpkins phase. Musically, the marching beat (not unlike Chamberlain's usual style) is played on a set of eletronic drums, the bass is dirty, and the guitars are spiky (and sporadic; they only appear on the chorus). Lyrically, it's a valentine that Charles Addams might have written. Ostensibly it's a love song, but our twisted narrator tells his beloved she's a "gun to (his) head" and "the murder in my world." He even says she'll always be his whore. 'Scuse me?! Last time I checked this was not the preferred method of wooing a lady.

But, strangely, it works. This is mostly because there are also sweet sentiments, such as "in you I count stars" and "in you I taste God." But it also works because love is an extreme emotion. It reminds me of the movie Punch Drunk Love, when Adam Sandler tells Emily Watson that he loves her so much he wants to "smash your face in with a sledgehammer" and she comes back with "I want to scoop your eyeballs out of your sockets and chew and suck on them." Love isn't always pretty.

Album: Adore (1998)
Fave Moment: They way Billy says the word adore, with the perfect combination of distaste and longing.