Sometimes and artist needs 12 more songs to summarize their career. Case in point... 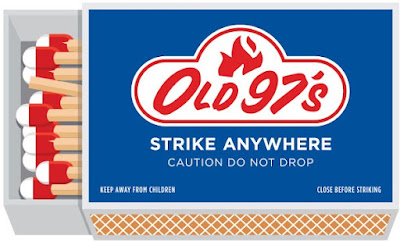 Old 97's kept chugging along through the 2010s, and show no signs of slowing down. Thank goodness for that.
Why not check out the original 12 by Old 97's so you have the whole story?
1. "Every Night Is Friday Night (Without You)" (from The Grand Theatre, Volume One, 2010)
This album found the band returning to a purer, rawer country rock sound, and this barn-burner is one of the finest examples of that.
2. "Champaign, Illinois" (from The Grand Theatre, Volume One, 2010)
How could I not include a song that references a place about 45 minutes from where I live (and where I've spent quite a bit of time)? That said, its pretty clear Rhett Miller chose the name for its syllabic and phonetic qualities, and not much else. Fun fact: The song is actually a rewrite of Bob Dylan's "Desolation Row," thus Dylan shares 50% songwriting credit.
3. "How Lovely All It Was" (from The Grand Theatre, Volume Two, 2011)
Just like every Old 97's album, you've gotta have at least one Murray-sung song. This one is warm and sweet, with Beach Boys harmonies.
4. "Perfume" (from The Grand Theater, Volume Two, 2011)
Given that "Murder (or a Heart Attack)" was about a cat, is it too far-fetched to assume this one is about a dog? Listen carefully and convince me otherwise!
5. "Longer Than You've Been Alive" (from Most Messed Up, 2014)
Shuffling tune in which Rhett and the boys take an honest look back at 20+ years of living the pop life: "Most of our shows were a triumph of rock / Although some nights I might have been checking the clock."
6. "Wheels Off" (from Most Messed Up, 2014)
The band channels some of that Violent Femmes acoustic attitude for a typically Millerian tale of a guy, a girl, and too much alcohol.
7. "I Don't Wanna Die In This Town" (from Graveyard Whistling, 2017)
Chugging rhythm and atmospheric guitar set the mood for this story of an outlaw on the lam. It doubles as that tried-and-true rock 'n' roll staple, the on-the-road song.
8. "Bad Luck Charm" (from Graveyard Whistling, 2017)
If modern mainstream country leaves you cold, look no further than this twangy tune, which combines all the best elements of the genre: harmony, pedal steel, and down-on-your-luck lyrics.
9. "Jesus Loves You" (from Graveyard Whistling, 2017)
A tune in which our narrator casts himself and the lord Jesus Christ as rivals for a lady's love. The lyrics are so clever that this song deserves to be in a Broadway show: "You can talk to him all night / But I'm right here / He makes wine from water / But I just brought you a beer."
10. "Diamonds on Neptune" (from Twelfth, 2020)
Recalls their early-2000s power pop days in all the best ways.
11. "Our Year" (from Twelfth, 2020)
It takes some guts to do a song that immediately brings to mind the Zombies' classic "This Will Be Our Year," but damn if they don't make it work.
12. "Bottle Rocket Baby" (from Twelfth, 2020)
It's the kind of shit-kicking country & western song the Old 97's do in their sleep, but boy do they do it well.