12 More by Death Cab for Cutie 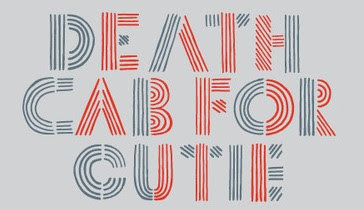 If you stopped paying attention to Death Cab for Cutie around the same time The O.C. went off the air, you should do yourself a favor and take some time to catch up.
Before you go on, you might want to check out the original 12 by Death Cab for Cutie.
1. "Little Bribes" (from the Open Door EP, 2009)
A tune exploring the fact that there's a depressing side to "What happens in Vegas stays in Vegas."
2. "Doors Unlocked and Open" (from Codes & Keys, 2011)
Hypnotic, driving, mysterious.
3. "You Are a Tourist" (from Codes & Keys, 2011)
Melodically rich song full of wisdom about listening to what your heart is telling you.
4. "Unobstructed Views" (from Codes & Keys, 2011)
There are two atheist anthems on Codes & Keys, this and "St. Peter's Cathedral." But while that song focuses on a downer death-is-the-end message, this one is more hopeful. "Unobstructed Views" reminds us that the point of religion is not specific tenets and texts, but love.
5. "No Room In Frame" (from Kintsugi, 2015)
Kintsugi was written and recorded in the aftermath of Ben Gibbard's divorce from Zooey Deschanel, and naturally many of its songs seem to address their relationship. This one has a chorus that poses a question he seems to already know the answer to: "Was I in your way / when the camera turned to face you / no room in frame / for two."
6. "The Ghosts of Beverly Drive" (from Kintsugi, 2015)
Less specific than some of the other songs on Kintsugi, "The Ghosts of Beverly Drive" is instead full of symbolic imagery concerning a relationship that clearly isn't healthy.
7. "Little Wanderer" (from Kintsugi, 2015)
"Little Wanderer" explores a couple that rarely spends time together because of their travel-heavy careers. I love these lines, and the way they take on a sadness with the knowledge that the couple weren't destined to last: "And I hope your absence makes us grow fonder / I hope we always feel the same / When our eyes meet past security / We embrace in the baggage claim."
8. "Everything's a Ceiling" (from Kintsugi, 2015)
A morsel of post-break-up navel-gazing, made sublimely palatable by the bed of synths its presented on.
9. "Northern Lights" (from Thank You For Today, 2018)
Perfectly captures the way love, loss, nostalgia, yearning, and beauty can all coexist in a single memory.
10. "Near/Far" (from Thank You For Today, 2018)
Since there won't be another Postal Service album, shimmery songs like this one are as close as we're going to get.
11. "Gold Rush" (from Thank You For Today, 2018)
Over a Yoko Ono sample, Gibbard laments the way gentrification turns quirky, diverse neighborhoods into rows of ugly condominiums and interchangeable chain restaurants, as well as the emotional toll of losing a place that held so many memories.
12. "Before the Bombs" (from The Blue EP, 2019)
An exploration of trying to find light in dark times, and very pertinent to the four-year-era in which this song was written and released.