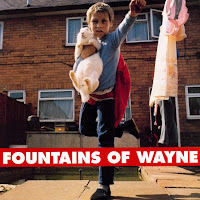 I was hip to them almost from the start. Their first album came out in the fall of 1996, when I was a sophomore in college. I'd gotten a job at the campus radio station, which gave me access to a vast library of promotional CDs. Most of these went ignored, as the program manager had very narrow tastes (basically if it wasn't in top 10 on the CMJ charts he didn't touch it). I must have read about Fountains of Wayne in a magazine, and doubtless said magazine used the magic words "power pop" because I sought out the group's self-titled debut immediately. I was thrilled to find we had it, and would end up borrowing it for at least the balance of that school year.

That's probably why the reverb-heavy guitar intro of "Radiation Vibe" transports me not only immediately back in time but also in space, specifically to the mailboxes in the student center at Augustana College in Rock Island, Illinois. Why there? I can't rightly say. Listening to it now, I'm struck by how much the band's power pop is sublimated within a clean and affable indie sound. It certainly doesn't commit to the genre as lustfully as the their next three albums would. I still love the melodic-richness of "She's Got a Problem," "I've Got a Flair," and "Leave the Biker," just as much as I did 24 (!) years ago. 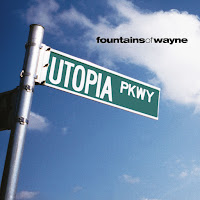 The band's second album - Utopia Parkway - came out in April 1999, less than a month before I graduated college. My primary memory from the time of its release is listening to "Red Dragon Tattoo" and "Denise" over and over in my little office at the American Cancer Society annex in Saint Paul, Minnesota. As I said, the band - especially Schlesinger - amped up their power pop influences on this one, embracing stacked harmonies and guitar solos. But it was a song called "Troubled Times" that spoke to me the most, not just when it came out but over the years as well (I wrote about it here whilst in the throes of a particularly bad romantic episode). One thing I didn't appreciate then as much as I do now is the way the album commits to its theme of exploring the experiences and emotions of being a teen. Perhaps in 1999 I was still too close to my teenage years, and painfully aware that my own experiences weren't all that typical (though I related well to the sense of bored isolation depicted in "It Must Be Summer"). 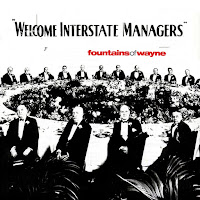 By June 2003 when the band's next record arrived, I was living in Minneapols, and had just finished classwork for my teaching license. I took the scary step of quitting my job at the American Cancer Society in anticipation of finding a job as a teacher. I wouldn't land one until July, so when I went to Cheapo Records in Uptown to buy Welcome Interstate Managers on its release day, I was short on funds, and blanched at the $16.99 price tag. But I'd heard the thrilling, Cars-like "Stacey's Mom" on the radio already, and knew I couldn't leave without getting the CD. Just a few days before that song hit #21 on the Billboard charts that November, some friends and I went to see Fountains of Wayne at the (late, lamented) 400 Bar in the Dinkeytown neighborhood. OK GO, who were a good couple of years away from their "Here It Goes Again" video fame, opened up; we got our money's worth that night. The album itself continued the push toward heavily melodic pop bliss ("Mexican Wine," "Bright Future in Sales") but also had some gentler, more spacious tunes ("Hey Julie," "Hackensack," "Valley Winter Song").

That dynamic may have been down to the band's two songwriters, Chis Collingwood and Schlesinger, whom I discovered while researching this piece wrote separately but always took co-credit. Collingwood claimed this was because they didn't want people parsing out "Chris songs" and "Adam songs." Of course now I'm going to do that anyway and grossly overgeneralize by saying the poppier, more "produced" songs were Adam's and the more contemplative singer-songwritery ones were Chris. 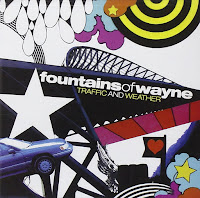 To reinforce that, the band's next record was largely Adam's work, and it shows. Traffic and Weather came out in April 2007, and in the four years between albums I'd fallen in love with a beautiful girl named Wendy. In fact, at the end of that very April we moved in together. Since Traffic and Weather is the soundtrack to one of the happiest times of my life, it's no surprise it's my favorite FOW album. And though that probably also means I tend to like Adam's work better, one of the standout songs for me is Collingwood's "Fire in the Canyon." Also of note about this record is the fact that I was so incensed by the reviews it received that my belief in music criticism perished in a spectacular explosion. You can witness it happen in this review I wrote at the time.

It's fitting that the second and final time I saw Fountains of Wayne, it was with Wendy, now my wife. They did a full band "acoustic" tour in 2009 and played at the Cedar Cultural Center, just around the corner from the 400 Bar. Again they had a notable opener, Jon Auer from The Posies (of which FOW drummer Brian Young used to be a member). They were funny and loose, and it turns out that acoustic tour was a good preview of their next record. 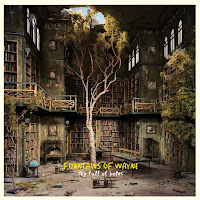 Wendy and I were on a belated honeymoon in New York City when the band's now-final record, Sky Full of Holes, was released. It was summer 2011, and I made it one of our goals while walking around Brooklyn to find an independent record store where I could buy the album. It took some doing, but were eventually successful, finding it at Music Matters on 7th Avenue. The folky style and more serious tone of the album threw me at the time, and honestly they still do. I can appreciate the artistry of the songwriting and performances, but as a whole it's my least favorite FOW album. In researching it, I discovered that Collingwood and Schlesinger's relationship fell apart during its making. Even so, songs like "Dip in the Ocean" and "A Road Song" stand up with their best work. And maybe this is only because I like when things come full circle, but the record feels in many ways like an older, wearier, more weathered version of their debut.

Fountains of Wayne disappeared so quietly that I wasn't even aware they'd broken up until I read Schlesinger's obituary in Rolling Stone. I didn't keep detailed tabs on his non-FOW work, but I checked in here and there. As I suggested earlier, I recognized that his name as producer on a project was pretty much a quality guarantee. I didn't follow his other bands religiously either, but I had Ivy's 2005 album In the Clear, and was obsessed with the song "Keep Moving," which served as a soundtrack to many long contemplative walks. I loved his supergroup Tinted Windows and their self-titled album (which I wrote about here). There was a bonus track on that album called "New Cassette" that, at least in part, captures the feeling Fountains of Wayne always gave me:

"Now I can't get it out of my head
And I'm sure it's your best one yet
Now there's 10 songs I'll never forget on your new cassette."

There's really only way to summarize the fact that there aren't going to be any more new cassettes from Adam Schlesinger: