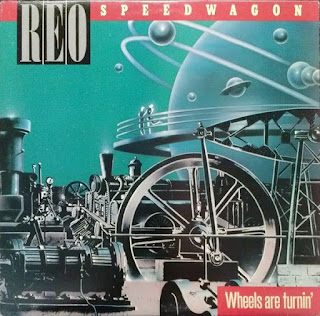 Where we left off:
REO Speedwagon rushed into the studio to follow up the mega-selling Hi Infidelity, producing Good Trouble. The album sold well and featured two top 40 hits, but was nonetheless seen as a disappointment.

Part of REO's disappointment with Good Trouble was that they'd felt hurried to complete it. They were also, according to the band's VH1 Behind the Music, seriously overindulging in drugs and alcohol. With their next album, they tried to rectify both of these problems. Kevin Cronin led the band (all save guitarist Gary Richrath) on a campaign of improved diet and exercise, and encouraged everyone to moderate their drinking and drug use. And the group took its time in crafting and choosing the songs that would end up comprising Wheels Are Turnin'. Cronin, Richrath, and drummer Alan Gratzer produced, bringing in David Devore (Grateful Dead, Fleetwood Mac, Santana, Foreigner) for production and engineering assistance.

When writing about Good Trouble I refuted the notion that the follow-up to Hi Infidelity was where REO essentially gave up their rock 'n' roll credentials and became synth pop balladeers. It didn't happen here either. There are two major ballads, and synths appear in four of the nine songs, but for the most part this is a "traditional" REO record. Opener and first single "I Do' Wanna Know" is a throwback to the band's boogie woogie roots, with a bluesy opening and doo-wop vocals from Tom Kelly and Richard Page. The closer and title is a rocker in the classic mode, stretching to nearly six minutes and dominated by Neal Doughty's piano.

Gary Richrath's songwriting presence in the band was clearly receding at this point. Whereas in the past he'd be responsible for at least half an album's songs, here he only has one solo composition (the piano-driven "Break His Spell") and two co-writes (the hard-rockin "Gotta Feel More" and the reflective "Rock 'n' Roll Star"). That said, his guitar is all over the record, providing defining moments on several tunes. 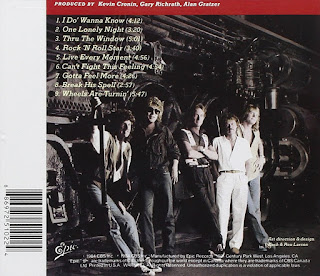 To pick up the songwriting slack, Neal Doughty offers his first solo composition since 1974's "Sky Blues," the synth-driven "One Lonely Night." The tune, about the aftermath of a fight between lovers, reached #19 on the Billboard Hot 100, and features background vocals from Tommy Funderburk, lead singer of the bands Airplay, The Front, and What If. Bassist Bruce Hall also has his now-requisite composing turn with "Thru the Window." Stylewise the song is a bit of a Frankenstein's Monster, part new wavey Police track and part Springsteen road anthem.

Of special note is "Rock 'n' Roll Star," in that it offers a through line from the band's earliest songs about trying to make it in the music business, tunes like "Music Man" and "Find My Fortune." Co-written by Richrath and Cronin with Tom Kelly, "Rock 'n' Roll Star" looks at things from the other side of success. "Now I'm center stage but it feels bizarre," Cronin sings. "Despite new cars and caviar." Rather than feel satisfied he still has something to prove: "Rock 'n' roll star / That's what they call you / That's not what you are...I still wanna be / A Rock 'n' roll star."

And of course there's "Can't Fight This Feeling," which would, for better and worse, become the band's signature song. It was REO's second number 1 (a bigger hit than "Keep On Loving You," topping the charts for three weeks to that song's one week of dominance). Cronin had been playing around with elements of the song for nearly 10 years, and finally put it all together. The song didn't invent the slow dance power ballad subcategory, but "Can't Fight This Feeling" may well have defined it, with the slow intro, the soaring full band entrance, and the heart-on-sleeve sentiment of the lyrics. And of course Gary Richrath's guitar is the primal element, ascending on the second half of the chorus and providing a wailing, instantly identifiable solo that would be imitated ad nauesam.

The extra time and deliberation resulted in an album that REO were happy with, but ironically it sold about the same amount as Good Trouble had, topping out at 2 million copies. 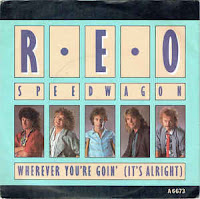 In 1985 REO contributed their first original song to a movie (and very first non-album track), landing "Wherever You're Going (It's Alright)" on the soundtrack to The Goonies. Written by Kevin Cronin and built on a sparkling synth line from Doughty and a chorus of child singers, the tune is a feel-good pep talk for someone setting out on a new phase of life. It would have been a perfect fit for the movie's closing credits, but instead plays early on in the film when we first meet Mikey and Brand.