August 30, 2019
Where We Left Off:
After the release of The Hits in 1988, founding drummer Alan Gratzer and guitarist Gary Richrath quit REO Speedwagon.

According to REO bassist Bruce Hall, there was never any question about whether REO should continue on after losing two key members. He told Malcom Dome, "as long as we had Kevin [Cronin], then we had the man whose voice was the most identifiable part of the band." It sounds a bit mercenary, but then REO's history had always been about survival and moving forward. "Roll with the changes," indeed.

According to Cronin, there was a moment of truth where the rest of the band (sans Gratzer, who quit first) might have chosen to stay with him or go with Richrath. This creates a fascinating alternate reality in which REO finds its fourth singer, a new drummer, and once again becomes Richrath's band.

But here in our timeline, REO recruited drummer Graham Lear (known for his work with Gino Vannelli) to replace Gratzer. At the beginning of the video for 1988's "I Don't Want to Lose You" you can see Gratzer literally pass the drumsticks to Graham and wish him luck. Once Richrath left, guitarist Miles Joseph (a well traveled L.A. backup player) took over. Both replacement players had played with Cronin and Hall in a for-fun side project called The Strolling Dudes.

But those two were only temporary, as it turns out, as the band soon brought in drummer Bryan Hitt and guitarist Dave Amato. Hitt was a Texas native who'd played with the likes of Cher, Graham Nash, and Wang Chung. Massachusetts native Amato was known for his vocal and guitar session work and a stint in Ted Nugent's band. Amato is reported to have said that joining REO was appealing because "every song has a guitar solo." 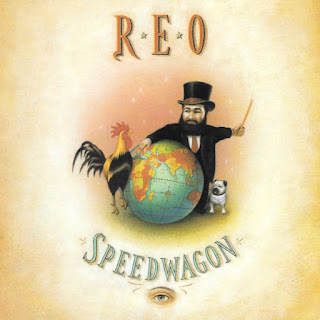 REO also brought in another keyboardist, Jesse Harms. Harms had worked most prominently with both Van Halen singers, playing on David Lee Roth's Eat 'Em and Smile as well as several Sammy Hagar solo albums dating back to 1984. As strange as it was to add a second keyboardist, Harms was likely brought in for his songwriting ability more than anything else.

The first album by this new configuration was given the laborious title The Earth, a Small Man, His Dog, and a Chicken - a literal description of the album art - and appeared in late summer 1990.

The songwriting was much more of a committee effort than on past REO albums, with seven of the eleven tracks attributed to more than one writer, and several outside songwriters participating. This is a bit of a head-scratcher, since the band already had two talented songwriters in Doughty and Hall, and yet those two have no songs here outside of a couple of co-writes.

In fact, since my write-up for Good Trouble I've been refuting the commonly-held notion that the success of Hi Infidelity led the band to abandon their rock roots and go after synth-driven radio hits. It simply didn't happen that way, but The Earth, a Small Man, His Dog, and a Chicken is the first of their albums where the criticism has some merit. Because of all of these extenuating circumstances , it's difficult to take the album purely at face value.

Cronin's "Love is a Rock" starts things off promisingly. Centered on an acoustic strum, a sparkly synth hook, and heavenly harmonies, this statement of devotion would end up being the band's last charting single, getting up to #65 on the Billboard 100.

From there, the record can be pretty cleanly split into "rockers" and "ballads."

The ballads - in theory the band's strength - are miss and hit. "The Heart Survives" (a Cronin/Harms cowrite) and "All Heaven Broke Loose" (written by Cronin, Doughty, and guitarist Adrian Gurvitz) are both fine songs, but are also somewhat boilerplate. The shiny, crystalline production doesn't help that. "Love In the Future" (written by Cronin and Tom Kelly) has a more organic feel, but the direct, well-intentioned lyrics about environmental stewardship can't quite rise above it being a "message song." More successful are "Half Way" (written by Cronin, Harms, and Mark Spiro, who'd worked with Cheap Trick and Julian Lennon) and "Can't Lie to My Heart" (written by Cronin with once-and-future hitmaker Diane Warren). The former rides a strong vocal and female backing singers to that classic REO ballad vibe. And the latter is melodically rich and soaring, with Dave Amato doing an effective Richrath impression. 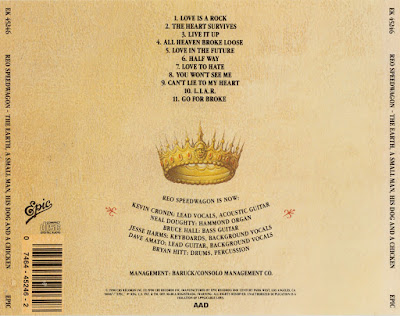 The rockers are a similarly mixed bag. For one thing, the band had dabbled in "hard" rock before, most prominently on Nine Lives, but their rock had always had elements of boogie woogie, blues, and country. Those genres aren't really present in songs like "Live It Up" (written by Harms) , "Love to Hate" (Also Harms), and "Go For Broke" (cowritten by Harms, Cronin, Hall, and Amato), instead falling more in line with the generic polished hard rock of bands such as Warrant and Winger that were popular at the time. Cronin's "You Won't See Me" (not a cover of the Beatles song), is more familiar, thanks to a twangy guitar riff and brassy eff-you lyrics. The other standout in this group is the propulsive "L.I.A.R.," the first REO song credited to the entire band (Cronin, Doughty, Hall, Amato, Hitt) since their 1971 debut. The title acronym stands for "love is all right," and had this song come out a couple of years earlier, it might have been a fairly significant hit.

The Earth, a Small Man, His Dog, and a Chicken was REO's worst performing album, chartwise, since 1976's R.E.O., and their lowest-selling record since Nine Lives in 1979. Harms left the band after the tour. The poor reception, along with the early 1990s ascendance of grunge and alternative music, would effectively send REO Speedwagon into temporary dormancy. It would be six years before they'd release new music.