August 16, 2019
Where We Left Off:
Wheels Are Turnin' was REO Speedwagon's third consecutive multi-million selling album, producing the #1 hit "Can't Fight This Feeling."

Produced by the same team as Wheels Are Turnin' (Cronin, Richrath, Gratzer, and David DeVore), Life As We Know It was recorded while when Kevin Cronin was going through a divorce. He says making the album was a welcome distraction from his family falling apart. At the same time, his relationship with Gary Richrath was fraught with tension. 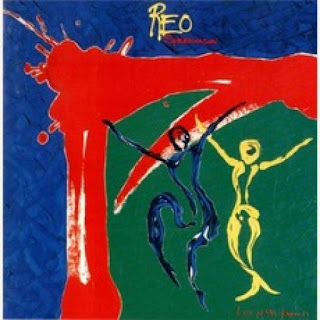 That set of circumstances played a huge part in the album's lyrical content, and knowing the record was the last one for the band's classic line-up makes for an intriguing listen. For example, it's commonly held that "Too Many Girlfriends," a tune about someone running too hot for too long, is Cronin taking a shot at Richrath. This is most evident in the self-referencing line, "he better find the one / he's gonna take on the run / before it runs him down" (Richrath, of course, wrote "Take It On the Run").

There are other songs that are even more pointed, doubling as messages to both an ex-wife and a soon-to-be ex-musical partner. There's the horn-laden, bluesy album closer "Tired of Getting Nowhere" in which Cronin is frustrated about the lack of forward progress in a relationship. It could be romantic, but knowing how things with Richrath were decaying, it could just as well be about that. Same for rave-up opener "A New Way To Love" which is about how opposites should be able to co-exist and thrive.

And "That Ain't Love" is about a partner that puts many qualifiers and conditions on a relationship: "As long as I say what you wanna hear / do what you wanna do be who you want me to be," Cronin sneers, "You think that's love, well baby that ain't love to me." When Richrath comes in with his screaming guitar it seems like we're eavesdropping on an argument.

Richrath's songwriting presence continues to wane, to the point that he only has two songs, both co-writes with Tom Kelly (an REO studio stalwart since 1979) and his songwriting partner Billy Steinberg (you can read more about them in feature coming up next week). "Screams and Whispers" is a poppy rocker with an on-the-nose moment where Richrath's guitar solo gives away to Doughty's synthesized sax solo. "Over the Edge" is a catchy number with some musical similarities to Kenny Loggins' "Footloose." The lyrics concern finding your way to clarity after going too far with drugs and drinking ("I was numbing all the pain / You taught me how to feel again"), which is ironic and sad, since Richrath's overindulgence is what would ultimately lead to his split with the band.

Once again other band members contribute, with Neal Doughty and Bruce Hall both landing one song each. After the chart success Doughty had with "One Lonely Night" he gets another shot with the fun "Variety Tonight." Opening with a synthscape not dissimilar to Tina Turner's "We Don't Need Another Hero," the song is all about keeping things interesting in the bedroom. The gospel singers are a throwback to the band's 1971 debut, and Richrath's gives a fiery guitar performance. Hall's "Accidents Can Happen" is a offbeat new wave gem that makes me wish we'd gotten a solo record out of him during this era.

Finally, there's "In My Dreams," a synth-laden sad ballad that lends some credence to the allegations that the band had strayed too far from their roots. It's about as different from their typical melange of boogie woogie hard rock blues as you can get. But divorced from preconceived notions it's an affecting and epic tune. The backing vocals, as on many of the record's songs, are by Cronin and Tom Kelly along with a new partner, future-"Butterfly Kisses" singer Bob Carlisle.

Life As We Know It produced two top 20 hits in "That Ain't Love" and "In My Dreams" but its sales were only about a fourth of the previous two albums, putting it on par with 1979's Nine Lives.

Life As We Know It also has the ignominious distinction of being REO's Rock Bottom. In this long-running feature, I use the AllMusic Guide and Amazon reviews to determine which album in a band's catalog is least loved. I had to invoke a rule about band-composition to determine this one, deciding to disqualify albums not featuring both Cronin and Richrath in the line-up. It didn't matter much though, as The Earth, A Small Man, His Dog, and a Chicken (1990) would have merely tied Life As We Know It at the bottom.

Of Life As We Know It, All Music Guide critic Doug Stone wrote, "As always when worrying about the wallet, REO alienates the old fans without drawing any new." He also says "the band's reach overextends its grasp" and brings up the fact that the album was included in Jimmy Guterman and Owen O'Donnell's 1991 tome The Worst Rock 'n' Roll Records of All Time.

Fans on Amazon echoed Stone's complaints about the band chasing hits. "J.HARMON" wrote that REO "sold out for pop radio hits and the drug addled lack of creativity that resulted from the drives for hit songs."

And, as is required for any album released between 1986 and 1988, fan's also criticized the album's "dated" production. "BillyG in Texas" complained, "Alan Gratzer's drum kit is drenched in gated reverb and goofy video game sound effects. Neil's synthesizer and emulator parts might have sounded cute or cool in 1987, but now are annoying." "Kyle McLaughlin" took time from his acting career to charge to write, "Where they mainly compromised was Gary Richrath's guitar. It is the worst tone I have ever heard on an REO album, thin, whiny, little or no over modulation/distortion. And the mix of the entire CD is atrocious."

Neither of these charges really resonate with me. What's funniest about the whining about REO chasing hits is that it makes it seem as though they were some underground band who suddenly  compromised their principles on this record. As we've seen, they'd been a commercial juggernaut for years. And the complaints about production are what they are. Some people really don't like the sound of the mid-1980s, just as some really can't stand the sludgy production of the 1970s. It's all a matter of perspective and taste.

I don't agree that Life As We Know It is REO's worst, but in terms of my own pick for that particular dishonor, I'll save that for my final summary.