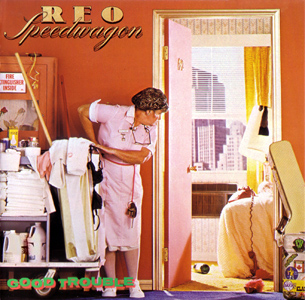 Released in June 1982, meaning the guys barely had a moment to breathe following the mega-tour for Hi Infidelity, Good Trouble is in many ways the yang to its predecessor's yin. While Hi Infidelity was a loose concept album about heartbreak, this one is heavy on love songs and devotionals. Cronin's ballad "Sweet Time" (a top 40 hit) is an ode to taking things slow in a new relationship. Richrath's "I'll Follow You" is a story song about a romance born in an all-night cafe somewhere in Texas. And bassist Bruce Hall's power poppy "Girl With the Heart of Gold" is a celebration of finding "the one."

There are a couple of tunes that aren't so joyful, both written by Richrath. "Every Now and Then" is a wistful remembrance of a past love, while "Stillness of the Night" is a dark-night-of-the-soul tune in which he admits, "it hit me like slap, you're never coming back." And the title track - written by Cronin - isn't so much of a love song as a lust song, a celebration of indulging in a bit of good old fashioned hedonism while on tour. 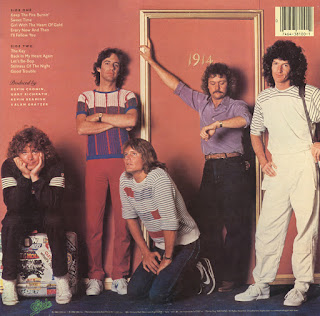 The are two songs that hit on REO's two enduring themes. "Keep the Fire Burnin'" and "Let's Be-Bop." The former is another of the band's perseverance anthems, imploring a romantic partner to not give up on the relationship. And "Let's Be-Bop" - like "Music Man," "Find My Fortune" and "Back on the Road Again" - is a song about the band itself. Written and sung by Hall, the song is mostly a expression of the gratitude and joy REO take in being able to perform for an appreciative audience, but it also addresses their ascension to fame:


"Suddenly it happened,
Here we are with all this glory
We never thought for a minute,
That we were writin' a story
We took our chances,
Somehow we held it together
And now I feel there is justice,
I always knew there was"

The album was made by the same team as Hi Infidelity, with John Beamish once again co-producing along with Richrath and Cronin. Drummer Alan Gratzer joined in on the production side as well this time around. The band's old friend Tom Kelly - just a year away from releasing a record with his own band, i-Ten - is back to provide soaring background vocals and harmonies on four songs. He's joined once again by future Mr. Mister singer Richard Page. This duo, along with Cronin, are billed in four different ways in the liner notes, including as the "Good Trouble Makers" and the "Powdertones."

The band's measure of success was now very different, and so it was inevitable that Good Trouble would be viewed as a failure. This is despite the fact that it sold 2 million copies and "Keep the Fire Burnin'" made it to #7 on the Billboard Top 200 (making it their third biggest hit to that point after "Keep On Loving You" and "Take It On the Run"). The band now say they were pressured by Epic to capitalize on their momentum. "It is still a good album," Gratzer said in a 2018 interview, "but it could have been so much better had we resisted the temptation to get into the studio so fast." As evidence of the band's slight disdain for the album, its songs are only very rarely performed live, and none appeared on 1988's The Hits.