April 16, 2019
Every musician hits a bum note once in awhile. Sometimes they hit a whole album full of them. Those unlovable efforts are the ones this feature, Rock Bottom, is concerned with. Here's how it works: I've consulted two main sources, the All Music Guide (for the critical point-of-view) and Amazon (for the fan perspective). The album with the lowest combined rating from both sources is the one I'll declare the worst. I may not agree with the choice, in which case I'll offer an alternative. Finally, there are some limits. The following types of albums don't count: 1) compilations (greatest hits, b-sides, remixes),  2) live albums, 3) albums recorded when the band was missing a vital member, and 4) forays into different genres (i.e. classical).

In the last couple of decades it's become a record geek cliché to claim that an artist's first album is their best, so much so that it serves as a cheat for those who are underinformed but don't want let on. For example, you could have basically zero knowledge of 1990s punk outfit Braid's recorded output, but still state, "They made a better record than their first" and sound like you know what you're talking about.

This has not always been the case. From the 1960s through to the 1980s it was all but expected that an artist would take at least a couple of albums to find their footing. Think of any major act from those decades and you'll find very few instances where their first album is considered their best. I believe this was a result record companies investing in artists over the long term. There was an expectation that musicians would grow into stardom.

That model fell away in the 1990s, and the pressure on artists rose significantly. Musicians on major labels are now generally expected to hit a home run on the first at bat. This is a big factor in the first album cliché. So is a general hipster sense of everything older being better.

Well, Sloan are decidedly old school, influenced by 1960s garage bands, the British Invasion, and 1970s glam and power pop. So it makes sense that they'd buck the trend and have their first album, Smeared, generally considered to be their worst. 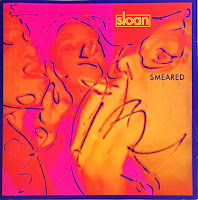 All Music Guide's Steven Thomas Erlewine gave the album three stars, calling it "a bit of a mess" because of its uneasy combination of the band's two influences at the time, the old-school ones listed above and the more de rigeur genres of shoegaze and noise rock. Amazon reviews sit at a three-and-a-half average, with "Derek V" echoing Erlewine's feelings. He wrote ,"Their original sound is all but lost under heavy overproduction that turned their song into something geared towards the popularity of early 90s Grunge." Production aside, some felt the songwriting just wasn't quite developed yet. "Mike Stone"'s generally positive review admits, "the latter half of the album is filler."

Surprisingly, I agree with all of this, though "Derek V"'s assertion of "overproduction" is a misnomer. Smeared came out on Geffen in 1992, a direct result of the post-Nirvana frenzy to sign "alternative" bands. Sloan had recorded the album in a living room in Halifax with their own money, and Geffen released it as is. It isn't as thought the band went into an expensive studio with a big name producer to make themselves sound current. The sound is DIY.

That said, the straightforward, simpler songs have stood the test of time. Opener "Underwhelmed" is still a crowd singalong to this day. "500 Up" and "Sugartune" also stand out. Thankfully they served as a blueprint for the Sloan we came to know and love.

One person who doesn't agree is the band's guitarist, Jay Ferguson. In a 2015 Noisey article in which he ranked the band's albums, Jay placed Smeared at 8 out of 11, ranking only Parallel Play (2009), Pretty Together (2001), and Action Pact (2003) lower. He said, "I still love Smeared...there are certain songs that I'm not crazy about, but it's probably the most current, of-the-time record we've ever made."

He's pretty much alone in his opinion, though. The closest competitor to Smeared in terms of the numbers was 2011's The Double Cross, which scored a full star higher. The fact that that record was second-to-last, I definitely don't agree with, but we'll get to that in Sloan's Rock Solid.