No band has put me through more of an an emotional roller coaster. There were times that I might have placed them in my top five favorite acts and times when I completely disavowed them. That recent Saturday Night Live sketch where Leslie Jones and Matt Damon argued vehemently about the band? I've been both of those people.

I basically gave up on Weezer after Hurley in 2010, but starting with 2016's White Album, I started to come around again. With this year's double dose of earnest goofiness (the Teal Album and the Black Albums), I'm pretty sure I'm on Todd's side: ride or die.

When I wrote the Rock Bottom on Weezer ten(!) years ago, they only had six albums. Can you imagine? Since then they've added seven discs to their catalog, not including the odds-and-ends compilation Death to False Metal (I don't).

So I figured it was time for a revisit. While I didn't have any illusions that the consensus about their best album would change (it didn't)*, I wondered if things might have shifted at the bottom. When I first tabulated the numbers, 2005's Make Believe but was almost statistically tied with 2008's Red Album. Since then, esteem for the Red Album has risen to the point that it was actually in the upper echelon, points-wise.

At the same time, of the seven records Weezer has released since 2009, Ratitude and Hurley are clearly the least loved, and are both fell into a statistical tie with Make Believe. Using the percentage of 1 and 2 star ratings on Amazon, Ratitude emerges as the new winner (loser).

Now I didn't agree with Make Believe as Weezer's worst, and I don't agree with Ratitude either, but let's hear the critics and fans out. 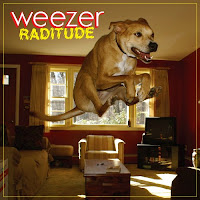 Matt Collar's AMG review curiously has nothing negative to say. Here's his conclusion: "Ultimately, it's Weezer's deft mixing of immediately hummable rock with lyrics that reveal Cuomo's own melancholy gaze on the pop landscape that makes Raditude a passionate surrender to growing up and a throw-your-arms-up-and-scream ride down the other side of the mid-life roller coaster." That sounds more like a four star review than the three-and-a-half it got.

Amazon reviewers, on the other hand, were brutal. "AM" writes, "Raditude has nothing going for it at all. The songs are universally unpleasant to hear, with some borrowing from '50s and '80s tunes, and none having even a modicum of the energy that once made Weezer a great band."

"Jayson Berray" says, "The only thing that listening to Raditude makes me want to do is go back and re-live classic Weezer so that I can pretend like their most recent stuff just doesn't exist." And Drew Blair gets graphic, "I couldn't finish it," he wrote, "it was like being raped in the ears."

Finally, ClydeNut addresses the Make Believe question: "I didn't think Weezer could really sink lower than Make Believe. Oh how did "Beverly Hills" make me cringe more then I'd ever cringed before. It was so bad...at that time. At least that song doesn't cater to current dance music. They made sure to take care of that in this album, and boy did they."

I feel like all of that is a bit histrionic. Ratitude was actually the album that won me over again after the Red Album disappointed me. I wrote about it here, finding it a solid album with simple pleasures. In retrospect its still a peg below the band's current-'10s renaissance, but I don't believe it's anywhere near their worst.

In my original Weezer Rock Bottom entry, I declared Maladroit (2002) to be my least favorite of their albums, and that's pretty much still true. I wrote that it was the first time I was really disappointed by the band. Relistening now, the album still has a claustrophobic, joyless feel that I don't believe was intentional. I'm no big fan of Hurley either, but that's mostly because it contains the band's all-time worst song, "Where's My Sex?"

So that's that. Let's check in again in 2029 when Weezer are on their 25th album and have run out of colors for their album covers (The Blue Album II anyone?).

*The White Album, however, has risen to third place in the rankings.