April 18, 2019
Welcome to Rock Solid, where we pseudo-scientifically determine the most beloved album in an artist's catalog. I've consulted two main sources. The All Music Guide provides the critical point-of-view and Amazon offers the fan perspective. The album with the highest combined rating from both sources is the one I'll consider the best. An artist's entire body of work is eligible, with one exception: No compilations (i.e. greatest hits). In each case, I'll also share my personal favorite album by the artist in question.

We learned in Sloan's Rock Bottom that their first album is not their best.  But apparently their second one is?

As the question mark indicates, this was a surprise to me. Though it's not anywhere near my favorite, I was 90% sure - based on my general knowledge of Sloan - that 1996's One Chord to Another was going to be the critic and fan choice. Even the band's guitarist Jay Ferguson placed it at number one on Noisey's Rank Your Records feature.

But when I crunched the numbers, that album came in a distant third, behind Never Hear the End of It (2006) and the winner, Twice Removed (1994). 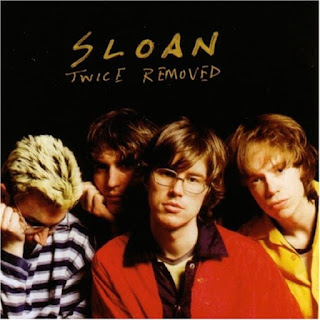 All Music gave Twice Removed four-and-a-half stars, with reviewer Stewart Mason calling it "a clever and varied collection of smart and catchy pop songs." Amazon reviewers adore Twice Removed. "Secoulte" says, "this album blows me away every time I hear it."  "Mike Stone" calls it "an album stacked top to bottom with great pop songs written by four great pop songwriters with very distinctive pop songwriting styles." And "Amazon Customer" says, "This is a top ten MUST have records of the 1990's if you are ANY kind of rock fan." Many reviewers cited it as their favorite Sloan album.

As if all that weren't enough, the album was twice voted the "Greatest Canadian Album of All-Time" by Chart Magazine readers, once in 1996 and again in 2005. Jay Ferguson placed it at second in their oeuvre, saying, "I had friends that weren’t really as keen on Smeared. But when they heard Twice Removed they were like, 'Wow, this is fantastic!'"

I'm still not quite convinced. While I find Twice Removed to be charming, to have more than its share of Sloan classics (the first four songs, "Worried Now," "Snowsuit Sound," and "I Can Feel It"), and to be a huge leap forward from Smeared, it still sounds a bit like the band hadn't quite grown into themselves yet. I admit that this is likely just a matter of perspective. I joined the Sloan bandwagon with 1999's Between the Bridges. By then they'd nearly perfected their balance of classic '60s and '70s rock and pop. Had I heard Twice Removed when it came out, I'd probably feel differently.

My personal favorite Sloan record is a toss up between Never Hear the End of It and 2011's The Double Cross, and that's a little odd because they're really polar opposites. The former is sprawling and long, while the latter is cohesive and concise. But both show off the insane amount of talent and range within the band.