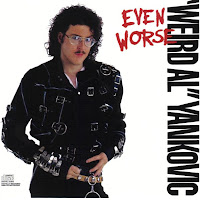 Here it is, the one that started it all for me. If I gave the impression that I experienced any of the first 4 "Weird Al" albums upon their initial release (well, besides that 45 of Eat It), I'm sorry. That wasn't the case. Even Worse was my first Al album.

I don't remember what attracted me to the Even Worse tape at Kohl's (back when they actually had a music department), but it probably had something to do with the cover. I was a Michael Jackson kid and the proud owner of the Bad album, the cover of which is parodied on Even Worse. No matter, I bought it, and that was that.

But how does it hold up against the odometer of time and with a whole career perspective? Let's find out.

Song Parodies:
There's an interesting pattern in the song's Al chose to parody on Even Worse. I'll see if you can figure it out before I get to the end of this section.

First up is Fat, a take on Michael Jackson's Bad. Al admitted that he formulated the idea for this song with the visuals in mind, and to that end the video and stage performances always feature Al doing the song in a fat suit. The lyrics are pretty funny, if not always clever. The one exception is "I've got more chins than Chinatown," which I just got for the first time. The song was what Al needed after the dismal performance of Polka Party. Piggybacking on Michael's success just like he did with Eat It, Even Worse was Al's best-selling album yet. By the way, Fat is the only song that doesn't fit the pattern I mentioned above.

Next, Al tackles George Harrison's cover of James Ray's 1962 tune (I've Got My Mind) Set On You, turning it into a meta-song called (This Song's Just) Six Words Long. In it, the narrator gives a play-by-play on his songwriting process ("I gotta fill time / 3 minutes worth of time / I'll throw in a solo, a solo, a solo, a solo, a solo here.") Nevermind that the original is actually seven words long; that wouldn't have worked syllabically.

One of Al's best parodies is I Think I'm a Clone Now, a reworking of the Tiffany-popularized Tommy James tune I Think We're Alone Now. The lyrics work perfectly throughout, as the singer tells the tale of his laboratory birth ("they took a donor's body cell and fertilized a human egg") and the benefits of being a clone ("I can send myself for pizza").

Side two opens with Richie Valens' La Bamba, which had been redone by Los Lobos in 1987, reimagined as Lasagna. The lyrics are an impressive feat of rhyming, and the song features the prominent return of Al's accordion-playing (which had been relegated exclusively to the polka medleys on previous albums). Nevermind the fact that a song with Latin origins was being used to celebrate the virtues of Italian cuisine.

The final parody on the album is Alimony, which is based of Billy Idol's remake of Tommy James' Mony Mony. Al's version is about a divorcee's financial woes, and does a good job of replicating the fake live sound of the original. I also like the back and forth with the background singers on the "I'm in debt" portion.

Did you figure out the pattern? Four of the album's five parodies are based on remakes (and two of Tommy James tunes nonetheless) That says something about what was popular in the late '80s, but I'm also guessing a music-savvy person like Al knew full well what he was doing when he made his choices.

Style Parodies:
Stuck In a Closet With Vanna White kicks off the style parodies, and though it doesn't take on a single artist, it's securely in the hair band genre, most closely resembling Motley Crue, Twisted Sister, and Def Leppard. The lyrics are another example of Al's increasing proclivity toward Crazy List songs (if you remember there were two of them on Polka Party!), wherein Al rattles off a litany of improbable events.

You Make Me is a clear homage to the clanging rhythms of Oingo Boingo. It's a love song, but also a Crazy List song, with Al listing off all of the things his beloved makes him want to do, such as, "when I'm with you I don't know whether I should study neurosurgery or go to see The Care Bears Movie." Velvet Elvis is also pretty clear about its source material, bringing The Police to mind immediately. It's curious that Al would do a Police tribute 5 years after their break-up and after already taking on King of Pain (King of Suede on In 3-D).

Twister is significant in that it marks Al's first foray into hip-hop. It's basically the lyrics to the ad jingle for the Twister game over a Rick Rubin-style rock-rap backing. Al raps the song with in a clear Beastie Boys imitation (his Ad-Rock is spot-on).

What The?!
Melanie is one of Al's best original songs ever, about a stalker who can't understand why the titular girl doesn't love him. If it sounds more grim than funny, that's because it pretty much is. In fact, it ends with the narrator committing suicide (begging the question: Is he singing this song from the afterlife?). Musically, the song is the opposite of its sentiment, gentle, melodic, sweet, and harmonic, bringing to mind the '60s revivalism of Marshall Crenshaw (and ripping off at least part of the melody of Crenshaw's You're My Favorite Waste of Time, as well).

Of a piece with Melanie is album closer Good Old Days. The narrator is a complete psychopath who details torturing animals, kidnapping high school girls, and assaulting elderly shopkeepers. This would be bad enough if it weren't all done in the style of a James Taylor song. Though I admire the spot-on imitation of Taylor's gentle style and the jarring juxtaposition of subject matter and tone, it just still feels so wrong given how much I loved Taylor's music as a child.

So how does Even Worse hold up? It's no longer my favorite Al album, but it's definitely up in the top tier of his work. The parodies are funny beyond their titles and the style parodies are diverse and plentiful. The only thing that might have improved the album is a polka medley of then-current hits, though I don't blame Al for putting that gimmick on hold to make us miss it.