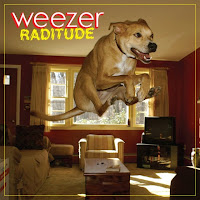 1) Can an artist who made his name on being an awkward outsider become a everyman populist?
2) Is it possible to write a review of a new Weezer album without negatively comparing it to their first two records?

Surprisingly, the answer to both is yes.

Raditude, Weezer's new album, comes hot on the heels of last year's disappointing Red Album, and it continues (one might even say it cements) the band's curious transformation from intelligent geek rockers to block-headed geek rockers. Weezer's early appeal was frontman Rivers Cuomo's kooky outsider personality, but since the band's return to active duty in 2001, he's been steadily moving away from that. His lyrics have gotten more and more simplistic and generic, even if the sentiment behind the songs was genuine.

Now it seems the opposite has happened. Many of the songs on Ratitude contain that attention to oddly specific detail that distinguished the band's debut and Pinkerton, but what they're saying is completely different. There are odes to living a decadent lifestyle (Can't Stop Partyin' and Let It All Hang Out), randy come-ons (I'm Your Daddy and Girl Got Hot), and regressive teen anthems (If You're Wondering If I Want You To) I Want You To and Trippin' Down the Freeway). Instead of hanging out In the Garage, you can now find Weezer In the Mall. This is surprise #1.

Surprise #2 is the fact that the band brought in outside songwriters. Cuomo, who writes songs with the effort it takes most people to blink, has rarely been lacking for inspiration. And handing over composing reigns for two tunes to bandmates Patrick Wilson and Brian Bell on the Red Album didn't exactly work out (they were two of the album's worst tracks). And look who he brought in! Jermaine Dupri (Mariah Carey and Usher), Butch Walker (Avril Lavigne), Nick Wheeler & Tyson Ritter (All-American Rejects), and Dr. Luke (Kelly Clarkson, Miley Cyrus, Katy Perry).

Some might cry sellout, but think about that for a moment. This is a band that had former Cars singer/songwriter Ric Ocasek produce their first album. You don't hire a man who has sold more than 17 million records in the hopes of appealing to the indie underground.

But Ratitude's biggest surprise (#3 if you're counting) is that it's a pretty good album.

Laboriously-titled opener (If You're Wondering If I Want You To) I Want You To (co-written by Cuomo and Walker) is the band's best single in 8 years. It's a joyous love song, mostly, about a vegetarian boy who falls for a girl in a Slayer t-shirt. My favorite part are the barbershop harmonies that lead into the bridge. I'm Your Daddy, despite the cringe-inducing title, is actually quite infectious and likable. But what else would you expect from the co-writer of Since U Been Gone, I Kissed a Girl, and Party In the U.S.A.? I love the synth breakdown where Rivers goes all, yes, Ric Ocasek. Girl Got Hot has a shouty, marchy appeal.

Can't Stop Partying is likely to be the most divisive track. The Jermaine Dupri-assisted lyrics are pure hip hop ("I got the real big posse with me/yeah I'm deep/And if you're lookin' for me I'm in V.I.P./Just follow the smoke/they're bringin' bottles of the Goose/And all of the girls in the corner gettin' loose") and there's even a guest rap from L'il Wayne. What makes it intriguing is the minor key delivery that lends an oddly depressive air to the song, as if the partying is actually a joyless compulsion.

Completing the album's rock solid first half is Put Me Back Together, which brings us back to more familiar Weezer territory. It seems like Wheeler and Ritter (whose band is not a far cry from Weezer) took it on themselves to play the Matt Sharp role, because the synth bits on the chorus are totally reminiscent his songwriting with The Rentals.

Things falter a bit in the record's second half. Trippin' Down the Freeway is a fine enough song, but the title phrase has no relevance to the rest of the song and ends up being somewhat distracting. Love Is the Answer finds the band experimenting with Indian singers and instrumentation (Slumdog Millionaire piggybacking?). It's also a bit jarring to hear Cuomo be so heartfelt and simplistic while singing the title phrase, but he's also kinda right. Strangely, the song appears in a non-Indian version on Sugar Ray's latest album. Let It All Hang Out is another collaboration with Dupri, and it's clearly the lesser of the two, though it'd probably be fun to hear live.

The album's worst song is the Patrick Wilson-penned In the Mall. It's not awful, just pointless faux-hairband drivel. Yeah, it's fun to hang out at the mall when you're a teenager. We get it.

Closer Don't Want To Let You Go brings things around a little bit. It's a slow starter, but eventually builds into an appealing Beach Boys homage (a sure way to win my heart).

Don't get me wrong, Ratitude should not be called a comeback. Those who are still clinging to hopes of a resurrection of Weezer past are going to be disappointed, maybe even disgusted. But those whose expectations of the band have been worn down to a nub (like me), will find several simple pleasures. That's a small victory, but a victory nonetheless.

Anonymous said…
Gee, you're being very generous to Weezer - and I am a big defender of the Green Album and the 2005 effort. But Raditude really annoyed me; it's so utterly pointless.
12:14 PM

I'm also a disenchanted Weezer fan that found something redeeming in Raditude. Sure, lyrically this album can be disappointing, but it has enough ear-worms to keep me coming back.

And unlike their other recent efforts, this one is mostly enjoyable instead of frustrating.
11:53 AM