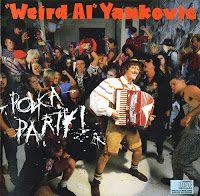 Into the life of every musician a little commercial and critical failure must fall, and so it was with Polka Party! It's not Al's Rock Bottom (we'll get to that eventually), but it is definitely ranks with his worst. Tellingly, he didn't even tour behind the album (though he did do a string of dates opening for the reunited Monkees). What happened? The inevitable letdown? Lack of inspiration? Burnout? (It was his fourth album in as many years).
Let's see what we can learn.

Song Parodies
The album opens with Living With a Hernia, a parody of James Brown's Rocky IV song, Living In America (in the film Brown performs it before Apollo Creed comes out and gets beaten to death by Ivan Drago). It's a spirited tune, and Al's actual research into hernias is so impressive that the song could probably be used by medical students to study for their exams (Check out the song's bridge: "You may not be familiar with the common types of hernias that you could get /So just settle down, let me clue you in / There's incomplete, Epigastric, Bladder, Strangulated, Lumbar hernia, Richter's hernia, Obstructed, Inguinal, and Direct.") But my favorite part is when instead of Brown's famous "I feel good!" Al exclaims, "I feel bad!"

Here's Johnny takes on the theme to Short Circuit, El DeBarge's Who's Johnny. Instead of going the Shining route, Al fashions a tribute to Mr. Ed McMahon, replete with references to American Family Publishers, Clydesdales (he was a Budweiser pitchman), and Johnny Carson. A McMahon imitator even comes in and throws in a few trademark laughs and "Hi-O!"s. It's all around a good time.

Things go downhill, however with the other two parodies. A take on Mick Jagger's Ruthless People has the double handicap of being not that clever (the title, Toothless People, is about all of the joke you really need) and being based on a bad song (since it was composed by Jagger, Daryl Hall and Dave Stewart of the Eurythmics, it should have been much better; at least the movie was pretty good). Word is that this the first time Al asked permission to parody a song before it was even released. It might have been the last as well.

The other stinker is a take 0ff of Robert Palmer's 1985 Addicted To Love. Al plays a poor soul who loves potatoes so much that he is, yes, Addicted to Spuds. Despite a clever line here and there ("Potato bug has gotten me too"), the song is rote. It reminds me of the only fan letter I've ever written. In 1988 I wrote to "Weird Al" and told him that I thought he should turn Palmer's then-new hit Simply Irresistible into the potentially hilarious Simply Indigestible. Shame he didn't listen to me, though I should have at least taken a crack at doing it myself for a school project or something.

Style Parodies
The best of the style parodies is Dog Eat Dog, a combination of Office Space and Talking Heads. Coming THIS close to ripping off Once In a Lifetime and And She Was, Al tells the daily drama of being a cubicle dweller.

Also up there on the quality scale is Good Enough For Now, a straight-up foray into country and western. The narrator is a non-particular feller who is willing to settle for second best: "You're the woman I've always dreamed of / Well, not really, but you're good enough for now." It reminds me a bit of another Al, namely Al Green and his nonchalant Let's Get Married (basically the song's narrator is bored and proposes to his girl; "Might as well," he says.)

Less easy to pin down is Just One of Those Days, an early example of a specific type of tune Al would later rely on way too often: the crazy list song. This one reels off a litany of absurd and terrible things that happen to the narrator in the course of a day, including getting a Coke bottle stuck on his tongue, being covered in ants by Nazis, and having nothing but tater tots for dinner (obviously this isn't the same narrator as Addicted to Spuds). Though it doesn't succeed for me overall, there is sort of a satisfying absurdity to the final line: "Just before bed / The world blows up and everyone's dead." I'm also always in favor of providing perspective to people who always have something to complain about. Musically it's a generic blues-based rocker, and is very reminiscent of In 3-D's Midnight Star (though it's nowhere near as good).

Don't Wear Those Shoes is another list song with no specific genre, though it's kind of in that Rick Springfield rock wheelhouse. This one is just kind of pointless, with the singer detailing the crazy things a person can do besides wear the titular shoes. It makes one yearn for the early Al songs that actually dabbled in real social commentary.

What The?!
I wasn't sure I'd be able to sustain this category, but so far Al has come through every time. On Polka Party, the honor goes to Christmas at Ground Zero. Sonically replicating classic '60s Christmas recordings, this gruesome ditty finds humankind celebrating Jesus' birth in the aftermath of nuclear destruction. Summing up the fear caused by Reagen having his finger on the button, Al sings lines like, "If the weather's okay / I'll go out with you and see all the new mutations on New Year's Day." The added air raid siren effects are just the bow and ribbon on the present.

Conclusion
So what's wrong with Polka Party? Taken as individual songs, the album only has a few true clunkers. And there are a couple of truly impressive tracks. But the majority of its tunes are just sort of there, mediocre and going through the motions. And if nothing else is true in this world, this is: A parodist who isn't having fun is not worth listening to.

Term Papers said…
Party is always sounds great feel good to know and read all this keep posting.
4:51 AM