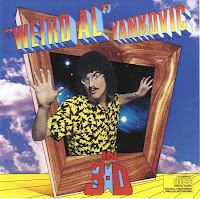 In 3-D, "Weird Al" Yankovic's second album, represents the beginning of a golden age. I say this knowing full well that my bias is toward Al's work from 1984 - 1993. Those were my formative years, and the years he could do no wrong in my eyes. Fortunately, that period also represents a huge chunk of his catalog.

Anyway, top to bottom, In 3-D may be Al's greatest accomplishment.

Song Parodies
The album begins with Eat It, a parody of Michael Jackson's Beat It. Basically, this is the song that gave Al a long-term career; it's how most people first heard of him. And it's not even that clever of a song! Jackson's Thriller was so white hot that anything riding its coattails became popular as well. Anyway, the big story with Eat It (and the rest of the parodies on the album) is the new coat of polish on the arrangements. Unlike on the first album, where accordion dominated every song, Al's band does a great job of replicating the instrumentation. And kudos to guest Rick Derringer for taking on (and nailing) the Eddie Van Halen guitar solo!

Brady Bunch is a fun take on the already-fun original Safety Dance by Men Without Hats. After a little intro about not liking anything on TV, the song basically turns into the Brady Bunch theme song put to different music. Inspired.

Another TV tune comes in the form I Lost On Jeopardy (the source being the Greg Kihn Band's Jeopardy). This is the first instance of an eclipse-the-original parody. What I mean by this is that after hearing Al's version, you can't hear the original song with out putting Al's lyrics to it. I'm still not sure whether this is a good or bad thing or who to blame or praise.

Though you're not likely to hear it on an '80s station very often, King of Pain by the Police was a fairly big hit in 1983. Al turns it into King of Suede, featuring a vaguely foreign store owner advertising his sartorial wares. The juxtaposition of the haunted minor key music with cheery self-promotional lyrics is intriguing, as if there is a deep well of sadness underneath this businessman's exterior. This is also a good time to point out that Al's parodies are only as strong as the originals. King of Pain is a great song, so King of Suede is too. If he parodies a bad song, the parody is going to be bad. We'll see some examples of this in later albums.

The final parody is Theme from Rocky XIII, a funny take on Survivor's Eye of the Tiger (which served as the theme song for Rocky III in 1982). The song finds Rocky in retirement "fat and weak" and running a deli ("Try the rye or the kaiser"). My favorite part is how Al works in the line "not gonna fly now" an allusion to the theme from the original Rocky.

Style Parodies
Al truly takes off on In 3-D's style parodies. Even the least of them is still pretty good. First is Gonna Buy Me a Condo, a reggae joint about a Jamacian immigrant who has completely bought into the American dream of consumerism: "Gonna buy me a condo / never have to mow the lawn / get a funny little t-shirt / with the alligator on." As with the originals on Al's debut, the social commentary is clear.

Al's first overt style parody (a song with original lyrics and melody, but still obviously in the style of a certain band) is a B-52's-copping number called Mr. Popeil. The song isn't about the Ronco infomercial guy, but his father, who started the family business. Speaking of family, taking over the Kate Pierson / Cindy Wilson role is none other than Lisa Popeil, the daughter of the song's subject!

The other two style parodies, Midnight Star and That Boy Could Dance are harder to pin down. There's no fan consensus on whose style they're taking on, and Al has never confirmed either as being a true style parody. Even so, they both clearly owe debts. The loser-makes-good tale That Boy Could Dance has a tinkling piano line and a sax solo that call to mind Bruce Springsteen and the E Street Band.

The melodically-rich Midnight Star belongs on any top 5 Al originals list. The lyrics are a list of funny/weird National Enquirer-type headlines ("Hear the story of the man born without a head!", "The ghost of Elvis is living in my den", etc.) and the closest musical analogy I can find is to the J.Geils Band, but even that isn't a clear match. No matter the inspiration, it's a great song.

Polka Medley
On In 3-D, Al introduced a new trick, the polka medley of hit songs. He was Marty Culp before it was cool. In modern times the gimmick has evolved to include only "current" hits, but Polkas on 45 features a mix of then-new songs and classics. Here's a list: Jocko Homo (Devo), Smoke on the Water (Deep Purple), Sex (I'm A...) (Berlin), Hey Jude (Beatles), LA Woman (Doors), In-a-Gadda-Da-Vida (Iron Butterfly), Hey Joe (Jimi Hendrix), Burning Down the House (Talking Heads), Hot Blooded (Foreigner), Every Breath You Take (The Police), Should I Stay or Should I Go (The Clash), Jumpin' Jack Flash (Rolling Stones), and My Generation (The Who).

What The?!
A "what the?!" reaction can be good or bad. In this case it's good. The album's final number is a strange concoction called Nature Trail to Hell. The song is an advertisement for a horror film of the same name about a homicidal maniac who terrorizes a Cub Scout camp. Mostly Al spoofs the thin predictable plots of these types of films, but he also gets some more social commentary in there when he says, "If you like the 6 o'clock news then you'll love Nature Trail to Hell." Musically the song has elements of metal, Rocky Horror Picture Show, and prog rock, but doesn't remain slavish to any one of these genres. And of course the film is "in 3-D". We have a title!

Paul said…
I'm surprised you didn't mention the backward masking on the final track: "Satan eats Cheez Whiz." Knowing how hot the whole topic was at the moment, and the backwards track at the end of Darling Nikki, I found that one of the best parts of the whole album as a 14-year-old.
8:46 AM