So You Wanna Be a Rock 'n Roll Critic: Lesson 8

October 09, 2009
Welcome to So You Wanna Be a Rock 'n Roll Critic, a ten-part instructional feature that will provide you with all the tips and tricks you need to become a real life music reviewer. As a matter of process, I've taken these lessons from exhaustive research into printed music reviews in Entertainment Weekly, Q, The New Yorker, Musician, Rolling Stone, and Spin. Additionally, I've looked into the uberhip perspective of Pitchfork.com. I also read many pieces by the godfather of music reviewing, Lester Bangs. And finally, I have not shied away from an examination of my own work here on 3 Minutes, 49 Seconds.

Let's cut to the chase here: Being a music critic means never having to say you're sorry.

Are you going to be flat-out wrong in your assessment of an album, song, or band from time to time? Well, yes and no. Yes, because you are, and no because you'll never admit it.

It's a music critic's job to make sweeping, definitive statements about things so it follows that naturally you aren't going to be right about all of them. Wait, you may be saying, if it's my opinion, how can it be wrong? And that's how you should be thinking, but every once in awhile all available evidence flies in the face of your opinion and makes it seem ill-considered.

Let's look at an example. Today, Prince's 1987 album Sign O' the Times album is generally considered to be one of his best. Rolling Stone's Toure calls it Prince's "masterpiece" and gives it 5 stars. AllMusic Guide gives it an identical rating, and Stephen Thomas Erlewine uses words like "tremendous", "fearless", and "liberated" to describe it. The album had 3 top ten hits, including the title track, I Could Never Take the Place of Your Man, and U Got the Look, in addition to the favorites If I Was Your Girlfriend and Adore. It's unequivocally a high point in the man's career. 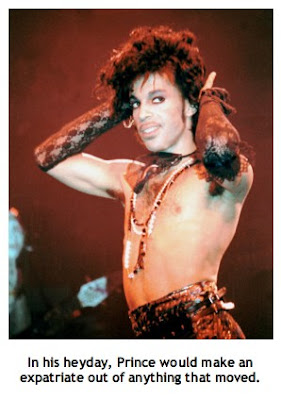 But when Steve Perry (not the singer for Journey, I'm assuming) reviewed the album in a 1987 issue of Musician, he didn't see the album as anything near classic. Words like "unremarkable" and "contrived" show up. As do "lame", "masturbatory", and "scattershot." Even stranger, this is not just a good old-fashioned lambasting, wherein the critic vents his spleen (the benefits of which we learned about in Lesson 4). Perry seems to genuinely like Prince, and he rarely gets as mean as he could. He even finds some good things to say about It's Gonna Be a Wonderful Night and The Cross and a couple of other songs. But his ultimate summation of the album is unquestionably negative. In a bravura conclusion, Perry states that Prince is "the first major pop star since Dylan to make an expatriate of himself without leaving home." What he means, we're left to assume, is that Sign O' the Times is actually a sign of Prince's withdrawl from the pop mainstream.

So it's safe to say that Perry's assessment was wrong. Luckily, we critics are prepared for such occurrences. Let's say an album you trashed eventually comes to be considered one of the best albums in an artist's catalog. Fans buy it in mass quantities, radio plays the hell out of it, and even other critics start admitting it's not so bad. What do you do then? Well, this is where it's helpful to cop a rock snob persona. The rock snob creedo is as follows: "Nothing that people actually enjoy can possibly be remotely good." So if that's your attitude, you're covered when something you didn't like becomes popular.

And then there's the flip side. Every so often you will sing to high Heaven the praises of a band, song, or record that everyone else basically hates. Case in point, Mick Jagger's 2001 solo album Goddess in the Doorway. The AllMusic Guide gives the album three stars (the same as Jagger's first two solo albums and less than his third one), and Erlewine calls it "disappointing" and says that it sounds like it could have been released in 1987. Amazon.com reviewers give it 3 1/2 stars, with the lowest total of any of his four solo albums. Metacritic.com averaged reviews of the album and came up with a 62 out of 100, and a quick look at the adjectives leveled at the album reveals words like "blandness", "sub-par", "formulaic", and "unsatisfactory." The album failed to sell well or leave any sort of lasting impression on the pop music audience.

In short, in the eyes of many, many people, it's not a great album.

So imagine your surprise when you'll learn that Rolling Stone PUBLISHER Jann Wenner reviewed the album and gave it 5 stars! FIVE STARS! That means it has no noticeable flaws. That means it deserves to be mentioned in the same breath as Exile on Main Street, Sgt.Pepper's Lonely Hearts Club Band, London Calling, or Pet Sounds. And Wenner, one assumes, is well aware of this. In his conclusion he says Goddess in the Doorway is "an insuperably strong record that in time may well reveal itself to be a classic." Other laudatory terms Wenner employs include: "exceptional", "extraordinary", and "beguiling." Even your world-wise professor (me) was so taken by Wenner's impassioned review that I ran right out and purchased the album. My impression? Well, let's just say I disagreed with Wenner more than I agreed with him and that the album is no longer in my collection. 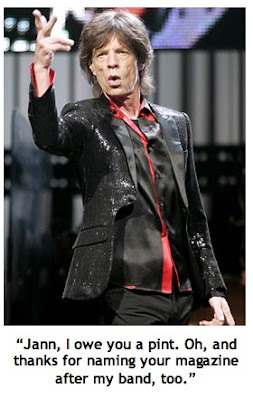 So Wenner went out on a limb, and it broke off. Again, the rock snob mindset offers a solution. Afterall, the opposite of the rock snob creedo is also true: "Everything that people hate is actually very good." If given the occasion, you just label the band, song, or album as one of the unders. You know, underground, underappreciated, or underrated.

Finally, you might be wondering what happens if you, *gasp* change your mind! It's entirely possible that you might, after multiple listens, or some life-changing event, come to realize that a record or band you once despised is actually kind of intriguing after all, or that something you thought was pretty good was actually kind of awful. What do you do then? Well, I'll tell you what not to do: Admit you were wrong. DON'T DO IT.

Consider the results when, in 1998, former Entertainment Weekly critic David Browne devoted an entire two pages to admitting he was wrong. The gasp of horror I emitted when I first came across this article was audible even in the outer-ring suburbs. Entlited "Second Grades," the piece finds Browne reconsidering some of the ratings he'd given out in the past. First he lists albums which he didn't rate high enough the first time around, including Radiohead's OK Computer (duh), Hole's Live Through This, and Snoop Dogg's Doggystyle. THEN, he admits that he is sometimes too kind (he needs to read Lesson 4), and therefore wishes that he'd given lower marks to Frank Sinatra's Duets and Cranberries' To the Faithful Departed.

But Browne's also violates Lesson 7 by admitting he has a bias, and that his personal feelings about Mary Chapin Carpenter and R.E.M. led to overinflated ratings for their Stones in the Road and Monster albums. And though he tries to smooth things over with a Celine Dion-sucks joke at the end, the damage is done.

I only bring this sordid affair up as a cautionary tale, and to reinforce my central point. Remember this if you remember nothing else: YOU ARE AND ALWAYS WERE RIGHT!

And if you guessed that we've reached the end of the instructional part of this feature, then you're also right. The final installment is a final exam, wherein we'll compare and contrast two different critics' reviews of the same album. We'll see what they did right and what they did wrong, and review everything we've learned over the last two and a half month. So get a full night's sleep, eat a good breakfast, and bring a sharpened number two pencil. This will go on your permanent record.