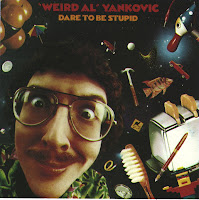 I hate to go all curmudgeoney, but remember the days when it was common practice to let a hot and prolific artist release an album a year? Why was this ever deemed to be NOT a worthwhile approach? Now, we typically wait 4 years between albums. Anyway, on his third album in as many years, Al continues his commercial and artistic hot streak. While a definite step backwards in quality from In 3-D, Dare To Be Stupid is still a very satisfying album.

Song Parodies
Like a Surgeon, Al's take on Madonna's Like a Virgin, may have kept him in the spotlight, but stands today as one of his lesser parodies. Reportedly, the idea for the song came from Madonna herself, when she wondered aloud why no one had made Like a Surgeon yet. I do like the line: "I'm a quack / it's a fact / The disgrace / Of the AMA / 'Cause my patients die / Before they can pay" and the use of the EKG monitor for rhythm, but otherwise it doesn't do much for me. Then, I'm not a huge fan of the original either, though.

Girls Just Wanna Have Lunch takes Cyndi Lauper's fun original and makes it pretty boring. One just has the feeling that Al could have tried harder. It's interesting to note that Al wisely doesn't attempt to imitate Lauper's distinctive singing style.

I Want a New Duck, a reworking of Huey Lewis and the News' I Want a New Drug, fares better thanks to weird / funny lyrics about a man who wants a feathered friend. Though the "new" part of the lyrics suggest he had or has an old one, which is intriguing in and of itself. Al gets in a bunch of groaner puns too (e.g. "He'll show me how to get down...get it?!"). I'm surprised no one saw fit to use this on the soundtrack to Howard the Duck.

The best of the four is, of course, Yoda. Taking The Kinks 197o hit Lola and makes it an ode to the diminutive Jedi master. As a kid, I could think of no better subject matter for a song, so this was my FAVORITE "WEIRD AL" SONG EVER (it's not anymore, just another example of the faded luster of the Star Wars franchise). Al does a good job with the lyrics, though one can tell he wrote it much earlier than it was released (legal wranglings with Lucasfilm held things up) because of the line, "I know Darth Vader's really got you annoyed / But remember if you kill him then you'll be unemployed." By '85, Return of the Jedi (featuring Vader's death) had come and gone.

Style Parodies
For the most part on Dare To Be Stupid, Al continues writing originals that don't owe anything obvious to a particular artist. The one exception is the excellent title track, an obvious riff on the robotic songwriting of Devo. In the lyrics, Al suggests not following fortune cookie cliche advice ("bite the hand that feeds you", "look for Mr.Goodbar", "it's time to let your babies grow up to be cowboys", etc.).

One More Minute is a '50s style doo wop song. Inspired by a real break-up, Al put his pain to song and wrote one of those I'm-claiming-not-to-care-that-you-left-me-but-the-fact-that-I'm-singing-about-it-undermines-my-message tunes. Things get more absurd and graphic as the song goes on. Sample lyrics: "I'd rather clean all the bathrooms in Grand Central Station with my tongue / Than spend one more minute with you." Love this one.

Al jumps a couple of decades even further backward for This Is the Life, a Depression era swing tune with braggart lyrics ("I hire somebody to chew my food" and the like) from a ridiculously rich narrator. The song appeared in the Michael Keaton film Johnny Dangerously. It's also notable that, as a nod to the growing popularity of hip hop, the middle of the song features some anachronistic DJ scratching.

Cable TV, extols the virtues of the titular subject (at that time still a newish invention) and appropriately sounds like an '80s theme song. It's got prominent piano, a sax solo, and a chorus of female back-up singers. Sporadically it calls to mind Ray Charles, but for the most part it's cheesy '80s rock.

The final style parody, Slime Creatures from Outer Space, is also hard to pin down. It's got a very '80s sound as well, making use of a drum machine, heavy funky bass, and computerized voices. Add in some horns and it vaguely nods to Prince's 1999 and Purple Rain sound. The lyrics concern an alien invasion, if you didn't guess.

Polka Medley
Al obviously recognized a good thing after In 3-D's Polkas on 45, so he tried again with Hooked on Polkas. Here're the songs he tackles: State of Shock (The Jacksons feat. Mick Jagger), Sharp-Dressed Man (ZZ Top), What's Love Got To Do With It (Tina Turner), Method of Modern Love (Hall and Oates), Owner of a Lonely Heart (Yes), We're Not Gonna Take It (Twisted Sister), 99 Luftballoons (Nena), Footloose (Kenny Loggins), Bang Your Head (Metal Health) (Quiet Riot), and Relax (Frankie Goes To Hollywood).

What The?!
Again in this case my "what the?" reaction is not necessarily negative, but I do wonder why Al decided to record a faithful cover of the theme song to George of the Jungle (a short-lived '60s cartoon by same guys that did Rocky and Bullwinkle). Oh well, it's kinda fun.