5 Years: A Brief But Indulgent History

November 06, 2008
When taken in whole, my life has basically been an endless series of obsessions supplanting obsessions. Some last briefly and are overtaken, left behind. But others soldier on, sometimes toiling quietly in the background, sometimes stepping to the fore. On November 1, 2003, I took two of those ever-present obsessions - writing and music - and married them. And it's been domestic bliss ever since.

I had two inspirations. One was friends who constantly asked me for my thoughts on new albums and artists. The other was Richard, whose foray into blogging (Highway 290 Revisited) showed me a forum I could use.

I had hoped, by this anniversary, to reach review #200, but I'm currently stalled at 196, so we'll save that celebration for later. Instead, I offer a brief, link-riddled series of reflections, recollections, and revelations:

The Name:
At first I called the blog Till My Head Falls Off, after the They Might Be Giants song and my opinion column in the Augustana Observer. I quickly decided to change it to the more appropriate Pop Life (after the Prince song). Unfortunately, the Minneapolis Star Tribune soon appropriated the name for their music blog, so on January 1, 2006 the current and final name took over. 3 minutes, 49 seconds is the average running time of ten of my favorite songs (the list is here).

Blog Fever:
In July of 2004 I started Baby, I'm A Star (also named after a Prince song). The idea was to watch pop music movies and then write about them. It was always intended as a finite project, but it's not done yet. I must admit it's one of those aforementioned obsessions that fell by the wayside. However, I have every intention of completing it. I even daydream about it being published as a book. 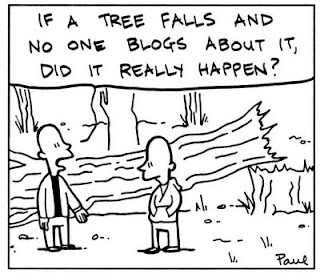 Other blogs followed. Brain Clouds features a one-panel gag comic I've been doing since 1996. Though I haven't drawn any lately, every printworthy cartoon I've done is there. Try is the newest addition, a collection of essays that I update sporadically.

Evolution:
3 Minutes, 49 Seconds has changed designs more than a couple of times. I've refined it along the way. I figured out how to add pictures (a big moment for me), and at Richard's clever suggestion, I added a review index (I probably use it more than any reader ever will).

My productivity has varied wildly. From 2003-2004 I wrote 87 entries! Looking back, I think album-reviewing was my mental escape from a rough first year of teaching. I hit a low in the unusually dismal 2007, which I wrote about here, posting a measly 20 times. I'm happy to say that 2008 has been my most productive year ever.

You Mean People Are Actually Reading?
Blogging has brought me to some interesting places. One year, I exchanged mixes one year with Betty Rocker, a fellow music blogger who found me thanks to Rilo Kiley. A Swedish online magazine mistook me for an actual journalist and asked me to become a contributor. The Star Tribune's Jon Bream found my blog and e-mailed me to participate in their Pick 6 feature. It was less than 200 words, unpaid, and he hasn't asked me to do it again, but I was published in the newspaper, writing about music, and that was exciting. I responded to an unnecessarily hateful Pitchfork of Matt Pond PA's Last Light album and sent it to the band, receiving a terse but gratifying thank you from Matt himself. A handful of local bands contacted me, either thanking me for a shout-out or soliciting one. I even had a free CD sent my way for review, like a real music critic (that was Dave Dill's excellent Follow the Summer, by the way).

But the most embarrassing moment was discovering that Vicious Vicious (a.k.a. Erik Appelwick, the former Hopefuls principal and current Tapes 'N' Tapes bassist) had posted my glowing review of his Don't Look So Surprised on his MySpace page. Very cool right? Except in the review I called his first album "almost exclusively unlistenable." It was one of those over-the-top cliche reviewer assessments without much thought behind it. Oops! I wrote him and apologized and since have chosen my words very carefully, at least when I think the actual artist might read my words.

Cringing and Crowing:
Looking back on past work, there are always moments of embarrassment, but I'm proud to say that I can stand by every review I've written. Maybe I was a little overzealous about some albums that I've never really listened to since, like this one, this one, and this one, but I meant it at the time.

I have much more to be proud of, from the week that I did a review every single day, to the massive decade lists ('70s, '80s, and '90s) I made with the help of several friends, to the review of every single Beatles album, to the 12 By lists, to the New Monkees review that continues to elicit comments and reaction.

The Future:
Obsessions are strange, not only for how they dominate our thoughts, but for how easily they dissipate. My dad, who is very similar in mental constitution, used to be a big pop music fan. In the last 10 years or so, I've watched him drift away. Now he likes jazz and bird-watching and says rap isn't real music. Will I meet the same fate?

The good news is that for now, I'm as inspired as ever. As the year wraps up, I'm going to continue the very fun Rock Bottom entries, and the 2008 End of the Year lists are just around the corner. In the new year, I plan to review every single Monkees album, take a look back at 1979, 1989, and 1999, as well as start work on a multi-part guide to music criticism. And of course I'll continue to post reviews. Thanks for reading!

Richard said…
I'm so proud to have had something to do with you starting this blog, which has been almost as much fun for me to read as I can tell it's been for you to write. Congrats on five years--may you continue for many more!
7:24 PM

You might not see yourself as a journalist, but your reviews are superior to many created by people who get paid for their labour.
4:12 AM

Carmamma said…
I still listen to the mix you sent and love it, especially the Carbon Leaf song. I'm still listening to so much music, but haven't had the energy to write about it.

And remember, I mistook you for a college student. Ha! Keep up the good blog!
11:07 AM