November 22, 2008
The one constant in every established artist's oeuvre is the bad album, the one that's reviled by both fans and critics. Those unlovable albums are the ones this feature, Rock Bottom, is concerned with.
Here's how it works: I've consulted two main sources, the AllMusic Guide (for the critical point-of-view) and Amazon.com (for the fan perspective*). The album with the lowest combined rating from both sources is the one I'll consider the worst. I may not always agree with the choice, and my reviews will reflect that. I'll also offer a considered alternative. Finally, there are some limits. The following types of albums don't count: 1) b-sides or remix compilations, 2) live albums, 3) albums recorded when the band was missing a vital member, and 4) forays into a different genres (i.e. classical). *A note about Amazon.com. I consider this the fan perspective, because most people who choose to review albums on this site are adoring fans of the artist in question.
* * *
This is a story of a very gifted and wildly popular pop musician/composer who simply stopped releasing new music. 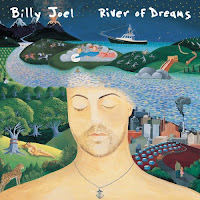 River of Dreams came out in 1993; it is Billy Joel's 12th album, and his final one as well. It's also his consensus worst. AllMusic Guide's Stephen Thomas Erlewine calls the album "labored" and says that "by the end of the record, he [Joel] sounds as exhausted as the listener feels." He says it's an unfitting end to a strong career. On Amazon.com T.Gore writes, "Every artist lays an egg with an album sometime, and this was Billy's EGG."
A superficial look at the facts would seem to create a simple narrative: Artist with fragile ego and an improbable run of success realizes he has made a below-par album and has a crisis of confidence that leads him to call it quits to preclude any future failures. But it isn't that simple.
For one it's pretty clear that Joel's early retirement wasn't a reaction to the album's reception. River of Dreams sold 5 million copies and produced the top ten title track. Further, there's evidence in the album itself that Joel is considering calling it quits. This is no more obvious than on the album's final song, Famous Last Words. In the final verse of that final song, Joel sings: "And these are the last words I have to say / It's always hard to say goodbye / But now it's time to put this book away / Ain't that the story of my life." Finally, if Joel truly did retire because of this record, it was a huge overreaction. It's not a bad album by any objective criteria. In fact, Joel never made a truly terrible album; some are better than others, for sure, but none of them sound dated or out of character, and none failed to sell well and produce at least one hit single.
So why the negative feedback from some critics and fans? Perhaps they were simply reacting to the tone of the album. It's possessed of anger, cynicism, and resignation. These emotions and themes were nothing new for Joel, but not since 1982's The Nylon Curtain had he released such a downer collection. In fact, the three songs that got radio play (the title track, All About Soul, and Lullabye) are the only fully positive songs on the record.
It also doesn't help that the album is a slow starter. Opening song No Man's Land is a guitar heavy condemnation of modern society. Billy had written eloquently about societal ills before (such as the plights of working men and women on Allentown and The Downeaster "Alexa"), but here ham-fistedly takes lower-rung topics like mega-malls, tabloids, and television. Great Wall of China is similarly bitter, and at first blush appears to be a pretty good break-up tune. However, further analysis points to the song being about a business partner or manager of some sort, given that it's addressed toward a man, and the line "In lieu of diamonds, gold, and platinum / Reminders will still shine bright." The song is quite strong melodically, with a definite mid-period Beatles feel.
Blonde Over Blue is in that same musical vein, and alternates despairing verses with buoyant choruses about a girl who inspires him. A Minor Variation has a groovy, blues-based sound and lyrics that are not the words of a well man. The final lines of the song go: "Until I'm through with this blue situation / Pass me the wine, it's just a minor variation." It wouldn't be so bad if Joel's alcohol addiction and depression issues weren't a matter of public record.
Shades of Grey just beats out No Man's Land as the album's worst moment. It's an awkward rock song with strained vocals and lyrics that don't say anything that Davy Jones didn't say better 27 years earlier in the Monkees song of the same name. Of course, the hits of the album are strong, especially All About Soul (a love song for wife Christie Brinkley, though they would divorce the next year) and the title track, which pays homage to African music, and The Tokens.
The album's last two songs round out a strong finish, mostly because they are a return to the piano-based songwriting that is Joel's strength. Two Thousand Years is sort of a spiritual sequel to the apocalyptic Miami 2017 (Seen The Lights Go Down On Broadway), looking forward to building a bright future on a crummy past. Billy wisely dusted this off for his millennium concerts.
Finally, we come to Famous Last Words. As I said before, it seems that Joel has already made his decision to call it quits, and it almost seems that he already knew his future held a series of never-ending tours: "These are the last words I have to say / Before another age goes by / With all those other songs I'll have to play / But that's the story of my life." It's worth noting that he also says, "There will be other words some other day." A Joel fan can only hope that that line is similarly prophetic, but with every passing year, it seems less likely we'll ever see another pop album from him.
I suppose that's the true shame of River of Dreams. But is River of Dreams the worst Billy Joel album? I don't think so. No doubt it's lower rung on on a very tall ladder, but I'd actually nominate The Bridge as the worst. It features blah cover art, a two duets (one with Ray Charles, the other with Cyndi Lauper), and has been labeled by Billy himself as disappointment. And we all know the man is is own worst critic.
Author's Note: This is album review # 197.

Anonymous said…
That is a very fair review of this album. 'River of Dreams' was almost as strong an effort as 'The Nylon Curtain', which I consider Joel's best work. The arc of the songs reveal a man initially feeling betrayed and bitter, only to find solace, redemption and faith through love - especially for his child. Erlewine's dismissal is way off the mark. This is one of Joel's best. Rock bottom would have to be 'The Bridge', which even Joel agrees is his weakest album.
7:40 PM

CTV said…
Very well written review. I was a massive Billy Joel fan in my teens, but I divorced him after An Innocent Man. There is no album after which I'd rate highly, though I have them all. River Of Dreams was a suitably disappointing bookend. The title track is probably the most awful song on the set.
10:10 AM