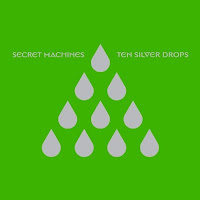 In All You Get From Love Is A Love Song, Karen Carpenter tells us that "the best love songs were written with a broken heart." And that's pretty true. Songs about heartbreak are nearly always more genuine and interesting than your average love song.

This is good news for Secret Machines. Apparently before the recording of their second album, all three band members went through break-ups. And while their happiness was temporarily sacrificed, Ten Silver Drops is the beneficiary. It's my favorite kind of record, a break-up album.

Ten Silver Drops meets both criteria. The music is cold but the melodies are warm, served on a bed of Beatlesque harmonies, making it exceedingly interesting to listen to. And the songs run the gamut of emotional experience. In fact, though the lyrics are often vague and impressionistic, they almost tell the story of an aftermath.

Like any good opener, Alone, Jealous And Stoned sets the tone for the record. Starting out as a piano-based swaying rumination, it temporarily blossoms into a propulsive guitar-driven movement right out of a Who song. This is the beginning of the end; the fact that his relationship is over seems to catch our narrator by surprise: "Must've lived so long with covered eyes / When did you say goodbye?".

Questioning soon turns to frustration. Musically, All At Once (It's Not Important) manages to gallop and soar all at once, showing the contrasting emotions of the lyrics. As the title indicates the song is about that feeling of waste and loss when a relationship ends, the idea that you put so much thought and effort into nothing. But you only have these thoughts because there's a longing to hold on to what you've shared. The next song, Lightning Blue Eyes, explores that longing and romanticizing in more depth. The drums are cracking, the harmonies are dreamy and the singer is confused again. "What changed?" he asks, as he reminisces about his love.

Daddy's In The Doldrums and I Hate Pretending are two mildly creepy songs that address the low point, the sense of hopelessness, and the anger, this time bare of any fondness. Not coincidentally, these two songs are the low point of the album musically.

Faded Lines brings things back with a roar. It sounds like Jimmy Eat World at their best as two guitars chime and slash against one another and the background vocals moan: "ahhh-ahhh." This seems to be about the tricky time when your ex has suddenly begun to show tenderness to you again and you think that maybe you could be together again. Fittingly, the song sounds hopeful, but our narrator is urging decisiveness and attempting to downplay the importance of the decision. "Make up your mind," he says, then adds, "'cause it's only love, that's all."

I Want To Know If It's Still Possible shows that he's only fronting when he says that. The title says it all, as hope for reconciliation becomes a direct question, though the answer is obviously no. The song is the best kind of slow jam, and features a catchy accordion performance from The Band's Garth Hudson.

Finally, we reach acceptance. 1,000 Seconds, a piano-driven musical bookend to Alone, Jealous And Stoned, looks unflinchingly at what was wrong with the whole relationship in the first place (as is often necessary for the healing process). These are the words of someone who is moving on: "I need love / That don't mean I need you."

Time will tell if Ten Silver Drops can join 'Til Tuesday's Everything's Different Now, Richard and Linda Thompson's Shoot Out The Lights, Fleetwood Mac's Rumours, and Vicious Vicious' Don't Look So Surprised in the pantheon of great break-up albums. Right now, I'd say it has a really good chance. The CD makes me feel that even if all you get from love is a love song, that's not such a bad deal.

Check out the Misc. Lists section for my 15 favorite "We're Through!" songs!

I would add Beck's Sea Change to the list of best break-up albums.

Paul V. Allen said…
What a cool observation! Thanks for posting it.
12:03 PM